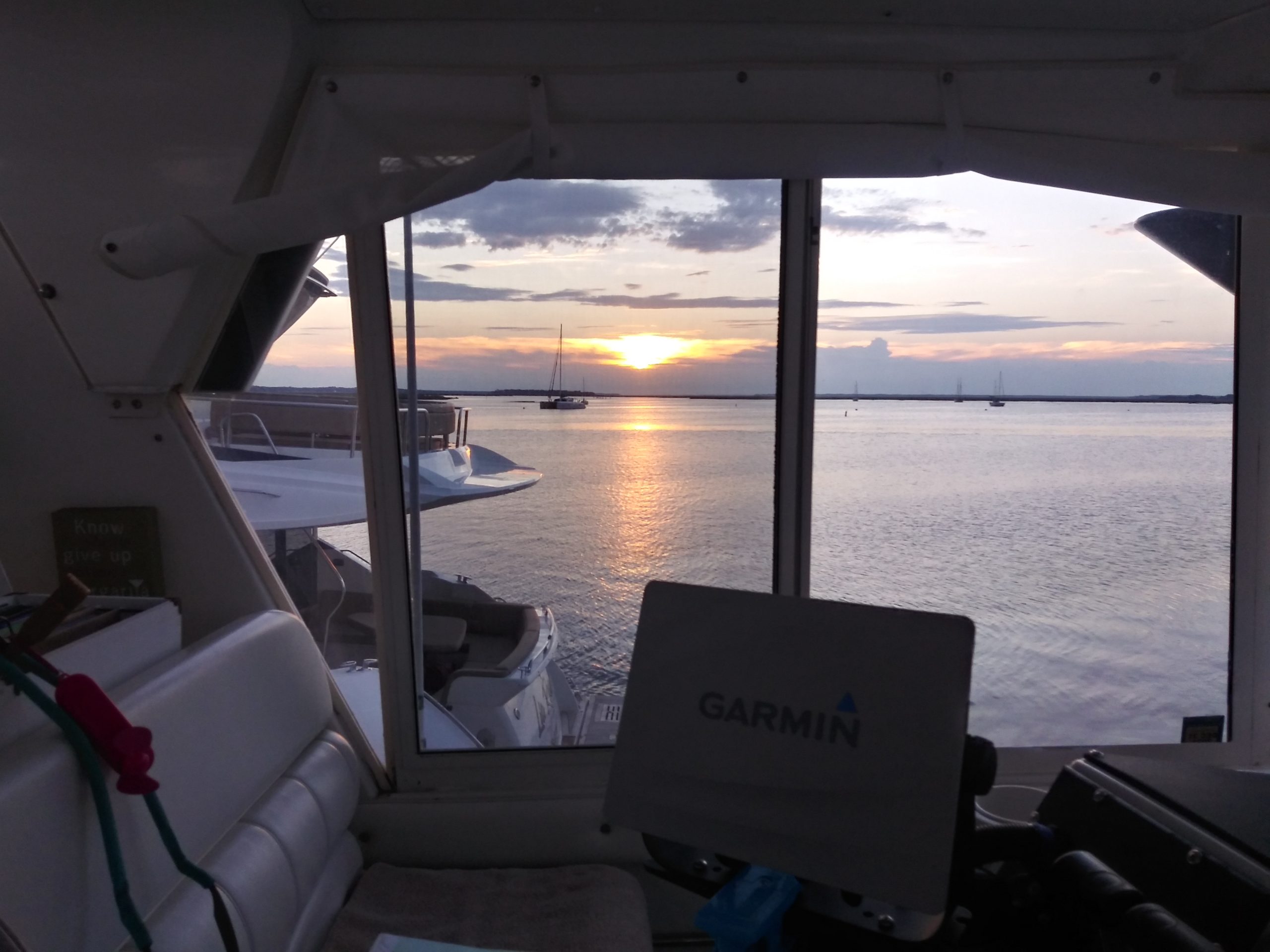 After unexpectedly spending a whole week in Fernandina Beach due to mechanical issues, we were finally ready to head north to Saint Simons Island, Georgia.

I was so excited to get to another state!

It’s time for a change.

So, we got fuel and headed north on the ICW.

We said goodbye to the paper mill to the south and the giant Bella Vita and of course, all the construction at the Fernandina Harbor Marina.

They were continuing to rebuild the docks after all the hurricane damage.

The day was beautiful.

The weather was perfect.

I didn’t expect to see this cruise ship there.

I’m so ready for this COVID-19 business to pass so those ships can be out there in the ocean where they belong.

Not only was there a paper mill on the south side of the marina but there was also one on the north side.

It was smelly at times.

As we continued on, we saw a fort on the land next to the inlet to the Atlantic.

We could have chosen to take the inlet out to the ocean and then get up to Savannah in record time.

But the waves weren’t cooperating and so we took the ICW all the way.

There was a strange structure up ahead in the water.

Strange buildings all around.

And submarines drive into that structure to de-magnetize the vessel.

There were a few ships around in the area to make sure we didn’t do anything crazy.

And of course, we didn’t.

Next, we saw some kind of barge up ahead.

Sam called the captain to get a pass.

For some reason, he couldn’t hear him respond.

Even though it was much smaller than the ones we saw coming down the rivers.

Then we came across a camp of some kind.

It’s summer and there should be lots of kids or campers around but it was like a ghost town.

I’m ready for everything to return back to normal.

By this time, we had crossed over into Georgia.

And the land seemed to have self made beaches in unexpected places.

Sam had taken great pains to plan our route today.

He downloaded Bob 423’s routes and tracks onto the Garmin chart plotter and on the Verizon phone.

And we left Fernandina Beach at the perfect time to arrive at the lowest point of the trip on a high tide.

I’m really impressed with him.

And Sam is really impressed with Bob 423.

Well, we have a new burgee on the front of the Here’s To Us!!

We joined the Marine Trawler Owners Association (MTOA) even though we have a cruiser, they let us in!

I love their mascot.

And even though it goes against my need for speed, I like the concept of slowing down.

I was really surprised to see it right here in Georgia.

It seemed like there were several beaches in Georgia as we traveled up the Intracoastal Waterway.

It’s a great day to be on the water.

This really caught my eye.

We saw a few sailboats anchored out near a marina.

The marina was Jekyll Harbor Marina located right next to the Jekyll Island bridge over Highway 520.

I still get excited about going under a bridge.

It’s the perspective of seeing it from this side.

I can’t get enough!

Then, we continue riding past Jekyll Island.

It is a place that I would like to stop at someday.

Maybe on the next loop!

We saw a bit of traffic as we continued up the ICW.

Although looking at these pictures, you’d never suspect it.

We were enjoying the scenery as we went.

Then, we came upon a barge that we anchored.

We had heard about a boat near St. Simons Island that was stuck.

We found out that it was a huge cargo ship hauling 4,000 new cars capsized.

Thankfully, all the crew members bailed or were rescued.

It’s a tragedy but cars can be replaced.

It was exciting to finally see the marina in the distance!

I was ready to get there.

Morning Star Marina office and showers are located on the second floor of this community.

It seemed like a short night but we made the best of it.

I would have loved to stay in Saint Simons Island longer.

I guess we’re going to have to be turtles in this part of Georgia next time.

Can you pick out the Here’s to Us!! on the fuel dock down there?

See it peaking out back there?

His boat is called Privacy but I’m not sure that he gets a lot of it.

We heard he was on his way to a tournament in Hilton Head.

What a way to travel, huh?

We are only staying one night here because we sold our house in Texas and have to get back and pack our stuff, find a storage facility and close in eight days.

That shouldn’t be too hard.