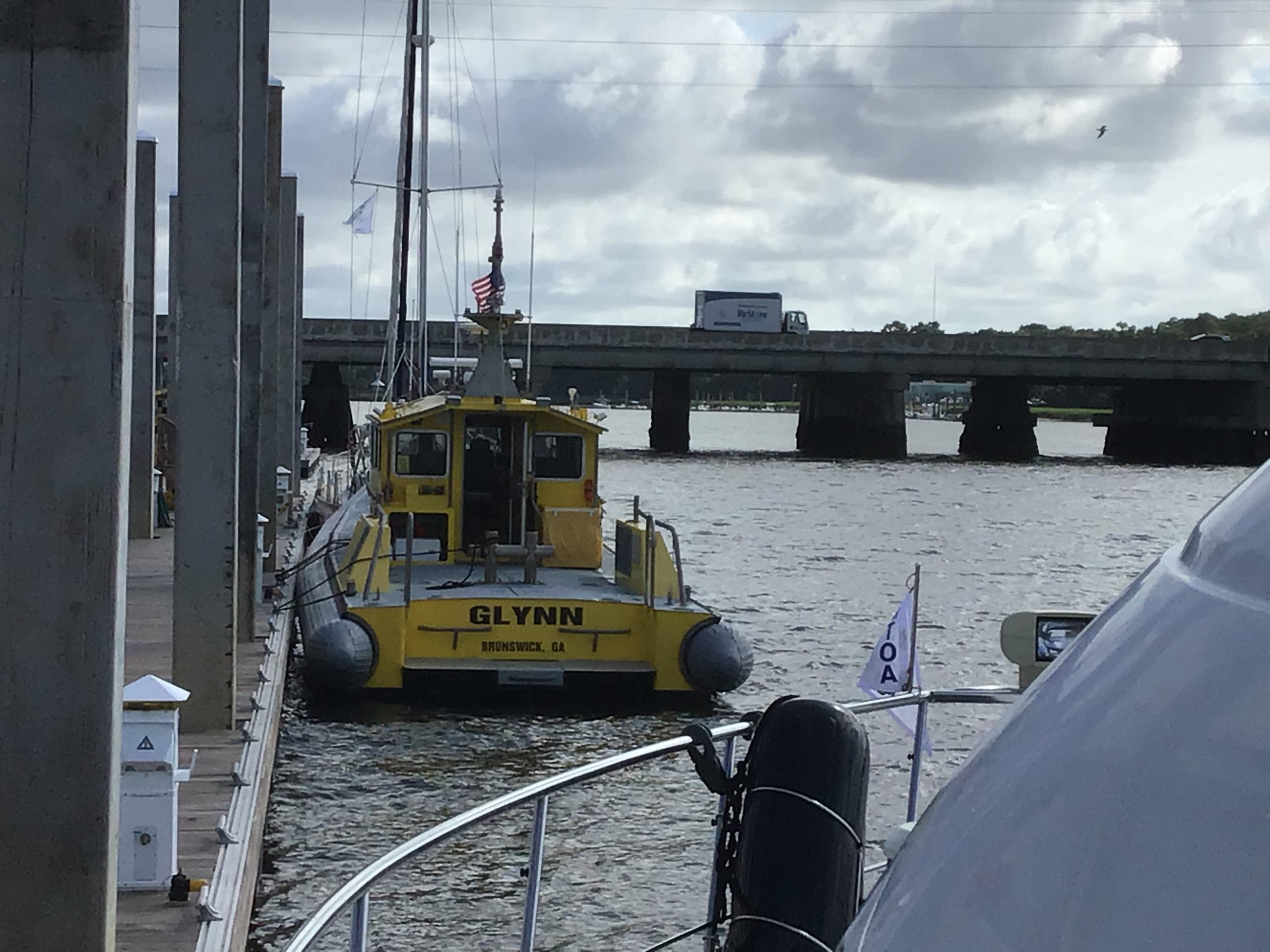 We slept in after a very long day yesterday.

Out front many of those boats had gone and a couple of tow boats took their place.

Took a look out back and all the boats docked between us and Tiger Woods took off.

As we left the fuel dock of Morning Star Marina, we got one more look at Privacy.

We had to retrace our steps a bit from the marina in Saint Simons Island back over to the ICW.

The Mackay River bridge was busy taking people to work.

The sky was a bit cloudy but we are on a mission to get to Savannah as soon as possible.

Our boat has to be above the 32 degree marker by June 30th for insurance purposes.

And we had no idea we would be this far south at this time of the summer.

That pandemic really set us back.

Now we are dealing with the sale of our home so we will be off the loop for a couple more weeks.

Sam did a lot of planning for the journey today.

I mean he always plans a lot but he did more today than ever.

He loaded the Bob 423 tracks and route in his Garmin chart plotter and Verizon phone.

But he also drew out the path with the danger zones highlighted.

I have never seen him do this level of detail to make the safest trip possible for us.

There wasn’t a lot of traffic out today.

What did everybody else know that we didn’t?

The sky looked ominous one moment and then fine the next.

But we had to keep moving on.

We were planning to go to the Kilkenny marina today.

There wasn’t a lot to see in this area.

Mostly marsh land all around.

But then this house popped up.

Along this stretch, we kept seeing some dolphins but by the time I got my camera, they were gone.

This happened a lot today.

Sam also decided to play “chicken” with the sailboat in the picture.

They both wanted the deep water that was in the middle of the channel.

The sailboat told Sam that somebody needed to be at the helm of our trawler!

But yes he did.

I was mad at both of them!

Then, this shrimp boat called out to Sam to make sure he knew where the shallow part was and to stay away from that.

Sam let him know that he was aware and they had a nice little conversation.

However, the Coast Guard doesn’t like boaters getting friendly on Channel 16 and told them so.

I’m so ready to be at the marina!

So, this was the day.

Dolphins that didn’t want to be seen.

When will it end?

Well, the weather decided that it was time for a break.

The sky got really dark and when we checked the radar again for the 100th time, we decided to drop anchor and wait out a storm that was coming.

We had already called the marina in Kilkenny and they told us to slow way down because the storm was over them.

So, we picked a spot and dropped the anchor.

Another boat was already there.

The storm came and with thunder, lightening, strong winds, and rain.

After waiting a couple of hours, we were ready to be on our way.

We left our fellow anchor buddy there and decided to pass by the Kilkenny Marina and find an anchorage somewhere.

It continued to sprinkle on us as we moved north.

We finally dropped our anchor again (twice in one day!) in Buckhead Creek Tap.

And we were the only ones there.

And a beautiful ending to a very long, crazy, unpredictable day.

Hopefully, tomorrow we can get to our final destination so we can catch a flight home.

But for now, we will enjoy Georgia and be thankful that we made it this far.