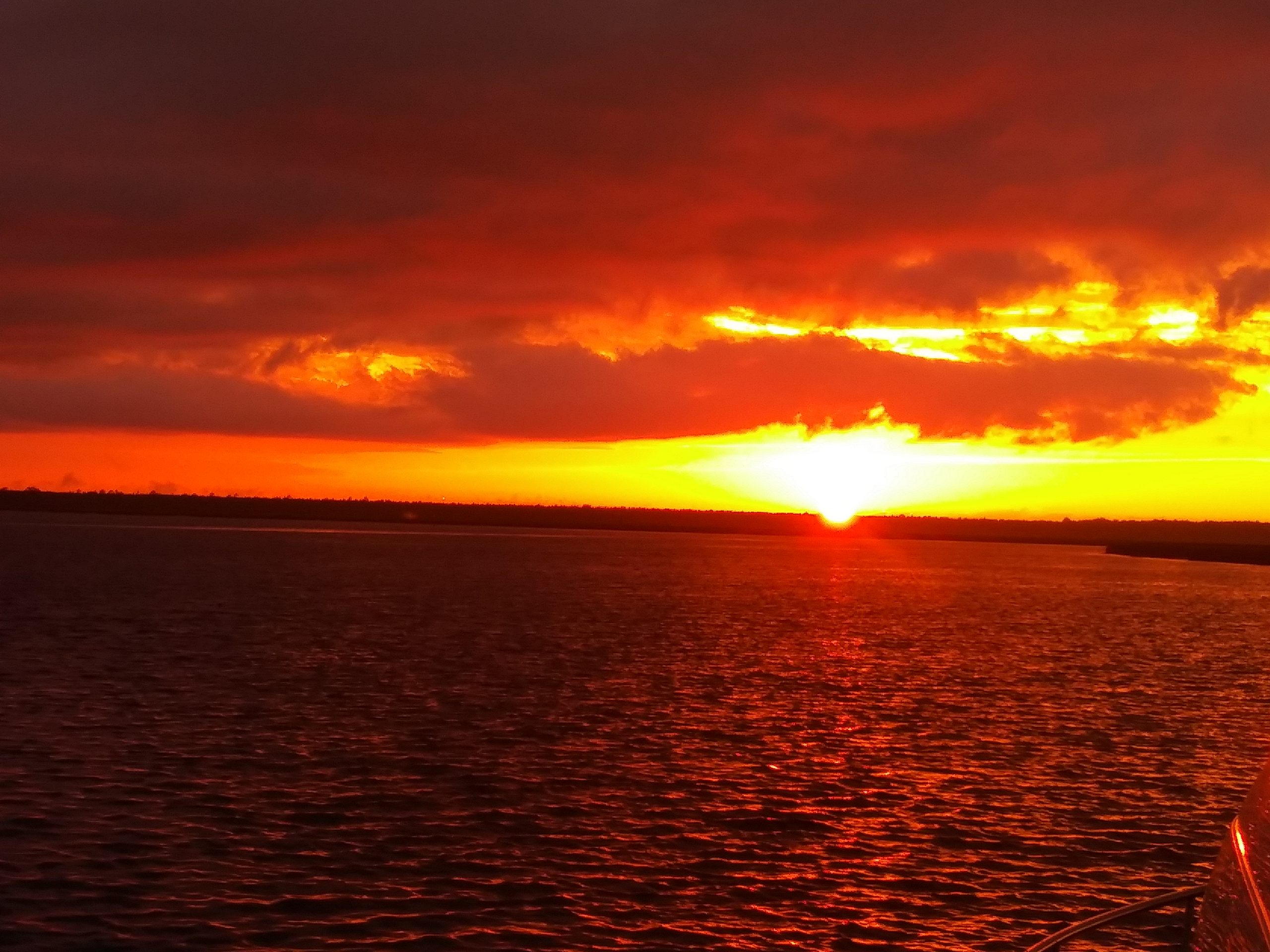 It was another cloudy morning in Georgia.

We were excited about the day because since we chose this anchorage, we were closer to Savannah than we had planned which meant it would be a shorter day traveling.

The last couple of days had been long and I was certainly ready to get there.

We made flight arrangements for the afternoon to get back to Dallas.

Our house had sold and the new owners wanted to close in 8 days.

This was no time for issues.

We had to get home.

So, we left our lovely anchorage.

The only boats we saw were fishermen in the area.

It was relatively quiet.

It was another planning-intensive day for Sam.

He had loaded the tracks and routes from Bob 423 on the Garmin chart plotter and the Verizon phone as a back up.

Since leaving Saint Simons Island, the scenery had been mostly marsh land and a long and winding channel.

There really wasn’t a lot to see.

I was excited to find a few beaches and trees for a change.

But mostly, it was flat grassland.

Sam’s planning paid off because we left before 8 a.m. so we could reach Hell’s Gate on a rising tide.

And thankfully, we had no problems going through.

Then, I spotted a couple of jet skiers.

And we turned the corner and saw a row of boathouses.

After spotting only a handful of homes during the last couple of days, it was really refreshing to see many homes on the water’s edge again.

There were various sizes of boats and houses.

I loved seeing them all.

I’m not really sure what that structure is.

We continued to see a few dolphins along the way.

That never gets old.

The trail kept winding and the homes were huge.

We were getting closer and closer to Savannah and I was feeling more excited as we moved along.

There were homes on one side of the channel and a row of trees on the other.

Both sides were beautiful.

We passed the Isle of Hope Marina where we had originally made plans to keep the Here’s To Us!!

However, Sam found out that it was about a mile and a half under the 32nd degree line.

He called the insurance and they were going to charge us more and sign a wind damage waiver if we kept it there.

So, Sam had to find a new marina further north.

The homes along the route were stunning and looked like Savannah.

We were getting close.

We docked at Savannah Bend Marina where we were going to keep the boat for a couple of weeks.

There was time to get tied down, pay for our slip, take a shower, grab our bags, and then call Lyft for a ride to the airport.

We got to the airport just in time to get to the gate and find out that due to social distancing, there was only one seat left on the plane.

We were using our American Airlines passes (priority standby) and they weren’t worth anything.

The later flight was full and all the flights the next day were full.

Rented a car and headed to Texas at 5:30 p.m. Saturday evening.

Sam was determined to get there in record time.

An hour into the trip, I discovered that my iPad was missing.

Where could it be?

I made multiple calls to the rental company and the airport and kept getting stuck in their very frustrating, never-ending phone trees.

The “Find My iPad” feature was telling me that it was outside at the rental company.

Finally, I talked to a sweet employee, Keyshon, who actually walked outside in the garage while I waited “on hold” and found it still in the luggage cart where I left it.

Enterprise Rent-a-Car sent my iPad to me overnight.

So, now we are three hours into the the trip and I can finally relax.

What’s going on up there?

We start to see rows and rows of break lights up ahead in downtown Atlanta.

I’m sure you heard on the news how protesters were blocking major highways and even set a Wendy’s on fire.

We sat on the highway helpless for three hours.

Sam is on adrenaline.

We were selling all of our furniture, linens, well-equipped kitchen, etc. with the house so all we had to do was pack up our personal items.

Well, we had 90 boxes of personal items!

We closed the following Friday and woke up to a beautiful sunrise.

What a fantastic parting gift!

We have had 10 great years at this lake house but it’s time for us to be moving on.

We loaded up our 90 boxes and took off.

After unloading, we headed to the closing.

And it was done.

We flew back to Savannah and our new friends, Dan and Amy, picked us up at the airport.

They own a swift trawler docked at Savannah Bend Marina.

It was a sweet reunion boarding the Here’s To Us!!, our only abode.

One of the AGLCA Harbor Hosts, Steve, kept an eye on our boat while we were away.

We really appreciated his help.

We had to leave Savannah Bend the next morning.

They were having a fishing tournament.

So, we moved right down the river to Thunderbolt Marina.

We were excited because we heard they had a courtesy car and delivered free Krispy Kreme doughnuts right to your boat.

Well, the courtesy car was booked for the day (Friday) and unavailable on the weekends.

We were there two mornings and we had to go hunting for the doughnuts.

And they were cold.

I don’t know what karma was making us pay for but that didn’t work out at all!

We got an email from a couple, Jane and Ross, who wanted to take us out and show us Savannah.

I have never been to Savannah and Sam has only been here on short layovers so neither one of us has actually seen it.

They picked us up and we got to see it all.

We saw the waving girl statue hailing a tourist boat as they went by.

We stopped by the Cathedral of St. John the Baptist and it was really impressive.

I felt like I was on a river cruise in Germany for a minute.

Ross’ aunt plays the organ and another relative is the priest.

After our run around town, they took us to dinner at Sting Ray’s, a fun place on Tybee Island.

It was a very fun day.

Before we left, we did have an opportunity to meet Kristine and Jeff who contacted us.

They live in Texas but also have a second home in Hilton Head.

We are glad they decided to come over in their boat for a short visit.

The Here’s To Us!! was in Savannah a whole lot longer than we were but we made the most of the time we had.

The things we saw and the people we met.