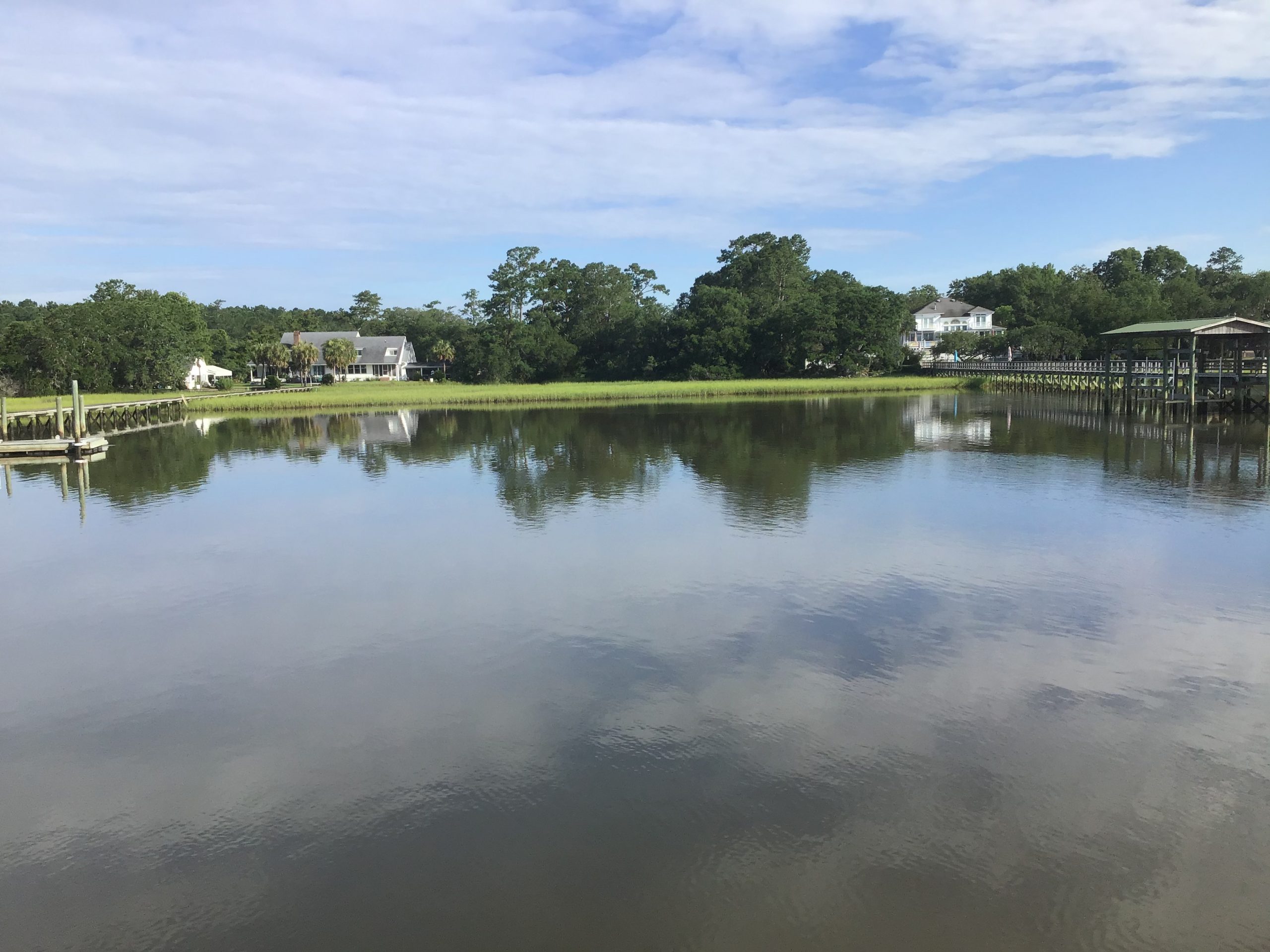 We had a great night’s sleep at this anchorage.

That is uncharacteristic for Sam.

But I woke up and decided to make breakfast.

I whipped up a couple of over easy eggs (twice – since 4 eggs won’t fit in this pan).

Also, I microwaved up some turkey bacon.

We brought up the anchor around 8 a.m. and were on our way.

There was something so calm and serene about the water today.

We were very relaxed cruising down the channel.

We saw a tow pulling three sections of parts and machinery.

It’s always strange seeing this stuff being transported in this way.

Every area of the loop has different size homes, styles and functionality. and it’s really interesting to see.

The homes here were situated far back from the marsh.

Just a lazy morning cruising up the ICW.

This was going to be a short day.

We’re only about 20 miles away from Charleston.

But it’s not a day without issues.

There is a place called Elliot Cut.

And it started with this sign on the right about bridge and hurricane regulations.

All we cared about was the current!

As we went into the cut, the current twisted us.

Then, it moved us along at 4 knots and took us up to 10 miles an hour while idling.

Awesome and strange at the same time.

Can you see the eddies swirling in the water?

When we arrived at these two bridges, we knew we were getting close to Charleston.

The first one is called Wappoo Creek Highway 171 Bridge.

And the second one is the Wappoo Creek Highway 30 Bypass Bridge.

The city marina can accommodate mega yachts and they do.

We are staying at Harborage at Ashley Marina so we have to continue on and go under the Robert B. Scarborough bridge to reach it.

Once we got settled and cleaned up, we took a Lyft ride to downtown Charleston.

Our first stop was the Carolina Ale House.

After that, we took a walk down the street.

I guess Anthony Bourdain must have visited this place.

Sam and I took ourselves on a walking tour.

We walked and talked and gawked.

Everything seemed so vibrant and alive.

I have never been to Charleston before and I wanted to soak it all in.

Now, that’s the way to see the sites!

Charleston also has a city market where vendors sell everything.

Unfortunately, due to COVID-19, there aren’t as many vendors and there is nothing inside.

While the state of the market made me sad, this definitely cheered me up!

The unique thing about the United States Custom House is that it looked EXACTLY like this on the other side.

Isn’t this a lovely fountain?

Well, it has a sign nearby that says that there is no lifeguard on duty and if you want to go wading, it’s at your own risk.

But knowing people, there must be a reason that it exists.

Well, we were interested in taking the water taxi for a tour.

So we make a right at the fountain and head off.

Sam has taken the water taxi ride before and he thought I would enjoy it.

Isn’t this a lovely walk?

Charleston did not disappoint.

Almost everywhere we walked, there were groups of kids who were trying to get donations by offering a rose made of palm fronds.

You give them a donation.

They give you a rose.

This was sweet the first couple of times but after about 27, I was over it.

Charleston has lovely homes and streets.

Even this alley seemed too unique not to capture.

We got lost looking for the water taxi, so we darted into the Blind Tiger Pub for a drink.

After asking Google again, where the water taxi was, do you know it led us?

Right back to the fountain.

While we were waiting for the water taxi, the sky grew dark and it started to rain.

So, we hid out in one of those huts.

After the rain stopped, it was still pretty gloomy so we decided to try Hyman’s Seafood Company.

They had given out hush puppies to us earlier and yes, it worked.

While in Charleston, we celebrated the 4th of July and even though the city canceled their official fireworks show, there were several folks that lit up the sky.

We are thankful to be Americans.

It did rain several times while we were in Charleston but we were blessed with an incredible full rainbow.

This was the view right behind our boat.

That night we enjoyed a full moon.

And the next morning, it was still hanging out.

We enjoyed the time we spent in Charleston and will definitely be back again.