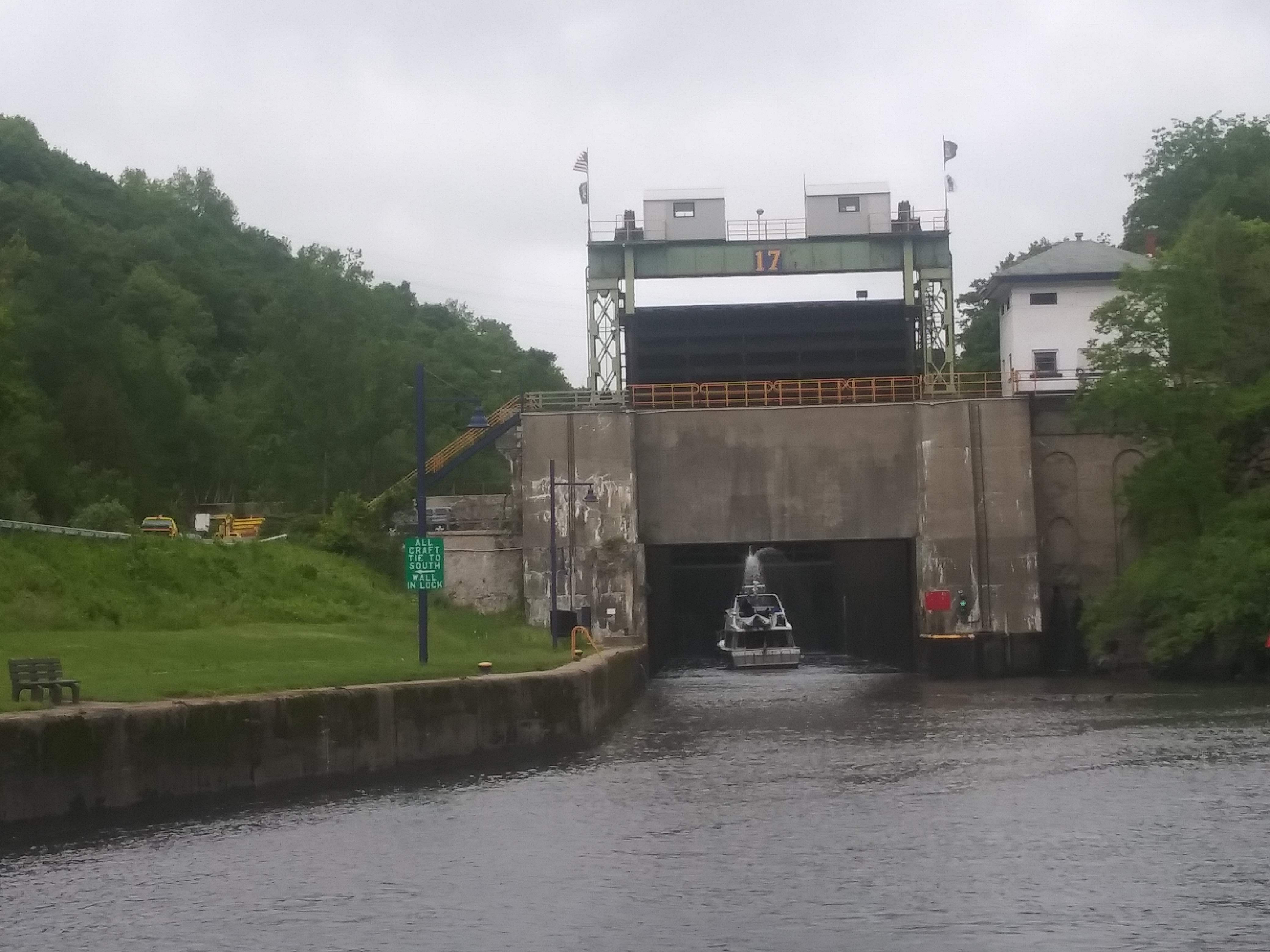 We checked the weather last night and then again this morning.

It said rain in the morning.

Sunshine in the afternoon.

We had planned to leave in the afternoon when the sun came out.

But when we woke up and looked outside we decided to go anyway.

Our boat can handle it!

Three Locks to the Marina

But today was different.

We were battling a little rain but more importantly, strong winds.

Although it is much colder today than it has been in awhile, we get to Lock 16 and it is fine.

Nothing to write home about (or blog about for that matter!).

We did notice that there are a lot more guard gates on this stretch.

I don’t know why.

It is the largest lock on the Erie Canal.

It is almost 41 feet high and we had to stay on the port (left) side.

As we entered, I grabbed one of the ropes hanging from the top.

I felt like a baby in a giant’s world.

Some locks feel like they fill up faster than others.

This one seemed excruciatingly slow.

As we moved up, the wind swirled around, and the current tried to fight us.

If felt as if we were moving up in slow motion but fighting the wind and currents in hyper-fast motion.

We were joyous as we reached the top and very excited to get out of there.

But not so fast.

There is a warning sign to let you know that the fun is not over.

The sign is warning about strong currents there around the lock and it’s a no wake area.

Slow and out of control is NOT how we like to be.

Superman to the Rescue

Lock 18 wasn’t as tall but it was really windy so we knew we would have to fight that.

Once inside the lock, I grabbed a rope and got prepared for battle.

The gate behind us closed and the water started to rise.

I look back and see one of my two stern fenders try to make a run for it.

I guess it was tired of being smashed up against hard concrete lock walls.

There he was just floating around while we are trying to fight the lock.

Sam put on his Superman’s cape and flew down from the bridge with a boat pole and saved the day!

As we finished up with Lock 18, I was so relieved that we only had to face three locks today!

On a good weather day, locks were much easier.

On a not so good weather day, we felt like we were beaten up.

When we spotted Ilion Marina in our pirate’s spyglass (actually, it was binoculars but I thought that sounded more nautical), we were more than excited.

We had had it with locks and wind and currents and we needed a break!

But was the fun over?

Sam had to fight 19-knot winds to get us over to the dock and tied up.

We docked right next to a little walk-up eatery where we got a couple of burgers.

We ate lunch on our boat and commiserated about our rough morning run.

The reason for challenging the weather is that we are trying to get to a marina close to Syracuse so we can fly back home next week.

It looks like there is rain and crazy weather in the forecast but we have got to push through during pockets of sunshine to get where we need to go.

The next few days are going to be interesting.