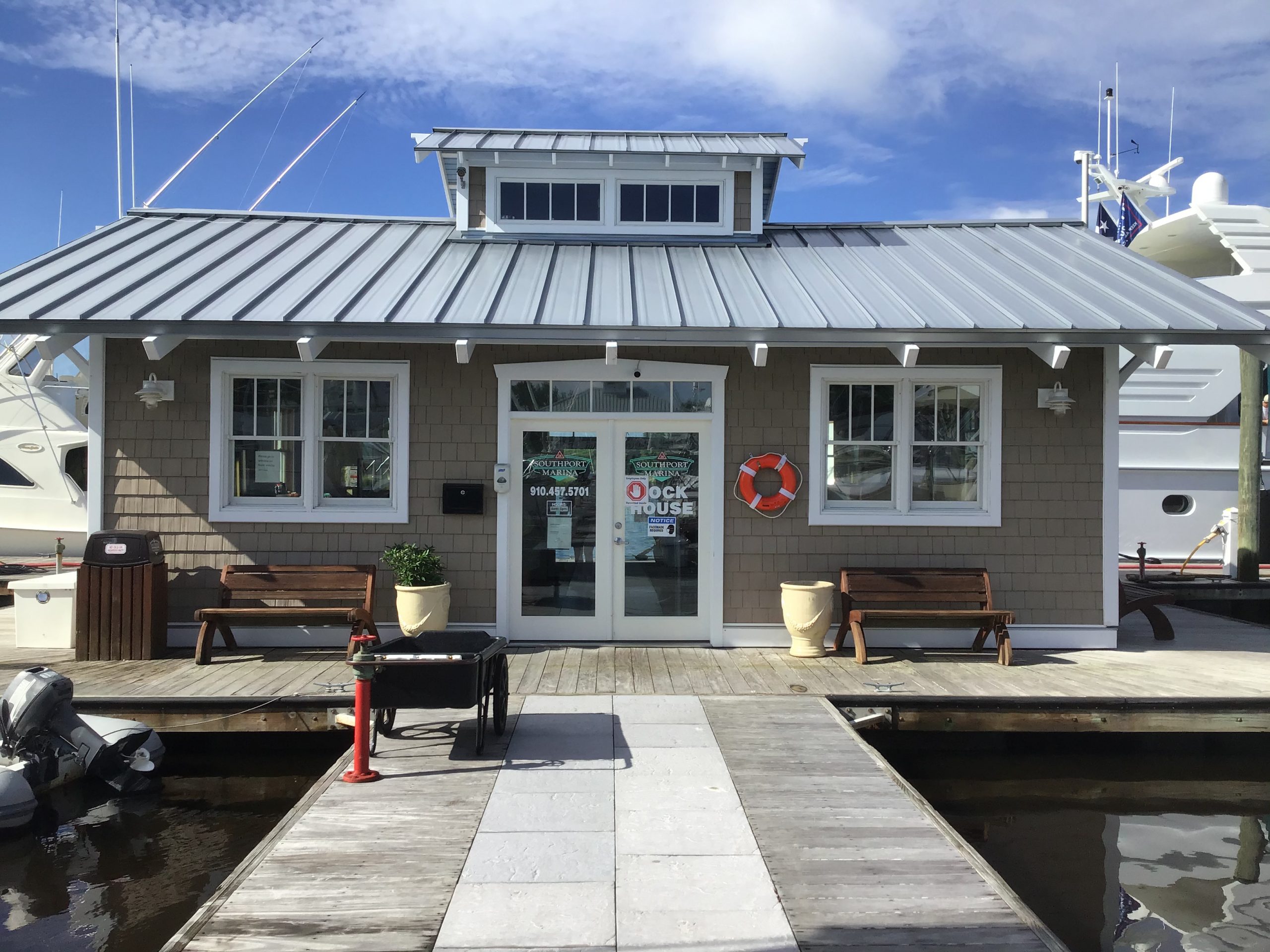 We left Southport Marina about a half hour behind our friends on Short Vacation.

Today, we head to Hampstead.

What a beautiful day to be out on the water.

And as I was outside bringing up the fenders and tying up the lines, Robert Creech called Sam.

He spotted us leaving from his front porch where we had Docktails with them.

We only stayed in Southport one night and I feel like we missed a lot.

We made our way past the town of Southport where all those movies were made.

It really is an idyllic place.

The sky was blue with a few clouds.

The water was calm.

Just a great day to be on the water.

There is a large ferry in the area that moves people from Southport to Bald Head Island.

I wonder who named it that?

It’s been interesting to see the different drudging operations all around the loop.

This one looked like it was getting the job done one scoop at a time.

As the morning went on, we started to see some traffic.

A lot of jet skis and small boats zipping around.

There is a bridge In Wrightsville that opens every hour so we are coordinating with Short Vacation who is still ahead of us to time it right.

There were a lot of vacationers on this beach next to an inlet.

The water certainly was a lot more blue than we have seen lately.

Sam once said he wanted to live in a geodesic dome house.

I was trying to get a shot of this unusual looking dome home when I got photobombed!

Oh well, look past the bikini at the blue house.

The traffic was crazy as we waited for the 1:00 p.m. bridge opening.

This watch dog was in place and alert!

As the bridge opened, we all made our way toward it.

Tons of traffic in front of us and tons behind us but we all made it through safely.

The homes in the area were beautiful but none had boathouses like we have seen before.

Sam decided to pass Short Vacation so we could run a little faster and blow out the bilges.

They graciously allowed us to pass.

Then, we came to this bridge and weren’t 100% sure we could get under it.

I mean I was but Sam wasn’t.

Just as we were going under it, I heard a funny noise.

I was starting to doubt my confidence.

But it was just a car going overhead.

I spotted this giraffe in a yard and then it suddenly felt like we were on safari.

That was a first!

We were rolling along when we spotted another tow barge.

They don’t really communicate much like the tows did on the rivers.

Finally, we came to the Harbour Village Marina sign.

The marina said they wanted Short Vacation to come in and tie up first so we slowed way down and went a little past the sign to line up better for the very narrow channel.

When we were docking, the dock master shouted for me to throw him my line.

I knew we weren’t close enough for him to catch it but he was persistent.

So I threw it.

It went right in the water.

This was a good lesson for me to ignore instructions and do it the way I have done it before.

It was a very short night.

There aren’t any restaurants or bars in the area to visit so we ate on the boat.

Our plans are to leave before the sun comes up in the morning.