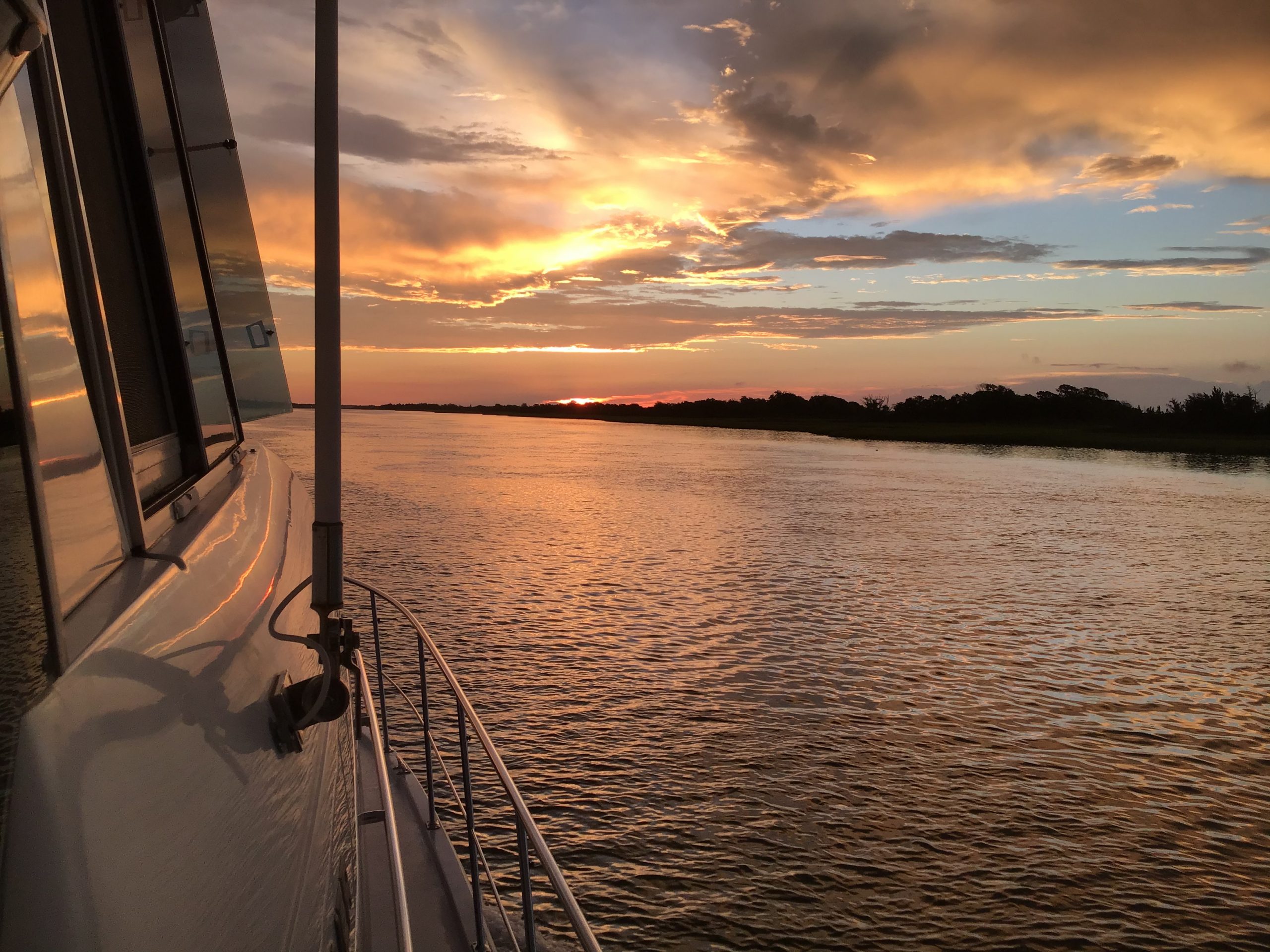 We woke up early to get started on our journey to Beaufort before the sun came up.

As we pulled away from the fuel dock, I couldn’t believe the beautiful colors of the sunrise.

It almost makes me want to get up early every morning.

We followed a sailboat out of the narrow channel and got back on the Intracoastal Waterway.

After we passed the sailboat, we actually watched the sun come up.

I can’t remember the last time we saw the sunrise.

It was quite spectacular.

A brilliant rainbow shooting down from the clouds!

There was also a fainter one trying to form but it was an incredibly beautiful morning.

We spotted a couple of dolphins but of course I couldn’t get a picture of them!

We went under a couple of bridges including this one, Topsail Island Bridge.

The world was just waking up.

We saw one fisherman in a kayak but that was about it.

There was also a sleepy sailboat anchored.

We were surprised to see a giant patch of dirt so close to the channel.

But there it was.

I remember vividly this stretch of the ICW.

It just seemed so calm and peaceful and like everything was right with the world.

I know it isn’t but for that moment in time, it was.

We had to be at this swing bridge at promptly five minutes before the opening.

This bridge is part of a marine base and they run, as they say, a tight ship.

Everything is very prompt.

A shrimp boat who has seen better days.

There were rows and rows of beautiful homes along the way.

There’s always something to see.

There were several kayakers out there.

Many more than we usually see.

And of course, we saw many sailboats out there.

And as the day went on, it just got busier and busier!

We made our way around Morehead City.

Do you know what all this stuff is for?

Neither do we but doesn’t it look awesome?

As we continued our trip through Morehead City, I turned around and looked out the back.

Can you believe this?

The traffic today was crazy!

We also saw this Dolphin Watching and Sightseeing Tour boat.

Maybe I should get on that to see some dolphins!

I sure haven’t had very good luck on my own.

We continued seeing very industrial looking buildings and then came to a railroad bridge that was open and another very tall bridge that we could go right under.

Check out that giant yacht.

What a way to travel!

We finally could see our last bridge that we had to go under and then hang a left to find Homer Smith’s Marina.

Actually, Homer Smith started out as a seafood place but now it has very few seafood left.

I think the dockhand said they had a few scallops if we wanted them.

But they are getting out of the seafood business and into the marina business.

Check out their ice house.

Slide open the door and get your shovel and bucket ready.

The floating docKs were really nice.

One night, we had docktails with our friends on Short Vacation.

We talked and laughed and drank wine.

Doing what Loopers do.

We also got a visit from a couple of subscribers, Jay and Lori.

They are gold loopers and sold their boat, Bella Gato, to a couple currently on the Loop who happen to be friends of ours.

It was a lot of fun hearing their stories.

Homer Smith has a courtesy car!

A lot of marinas are being bought up and going corporate so no more courtesy cars at those.

But this privately owned marina still has one and we really enjoyed using it to provision and go out to eat.

The restaurants and bars are about three blocks away from the marina but we took the car to drive around and see everything.

Of course, the restaurants were practicing social distancing so fewer customers were allowed in.

There were ferry tours.

And a very familiar boat.

As well as pirate cruises.

Now wouldn’t that be fun?

Although, I feel like I’m on one of those already!

We ended up eating at Beaufort Grocery Company and it was really delicious.

You better say their name correctly when visiting.

Just so you know.

We saw some lovely sunsets while we were there.

From the town and from the dock.

We had a great time in Beaufort and hope to return someday.