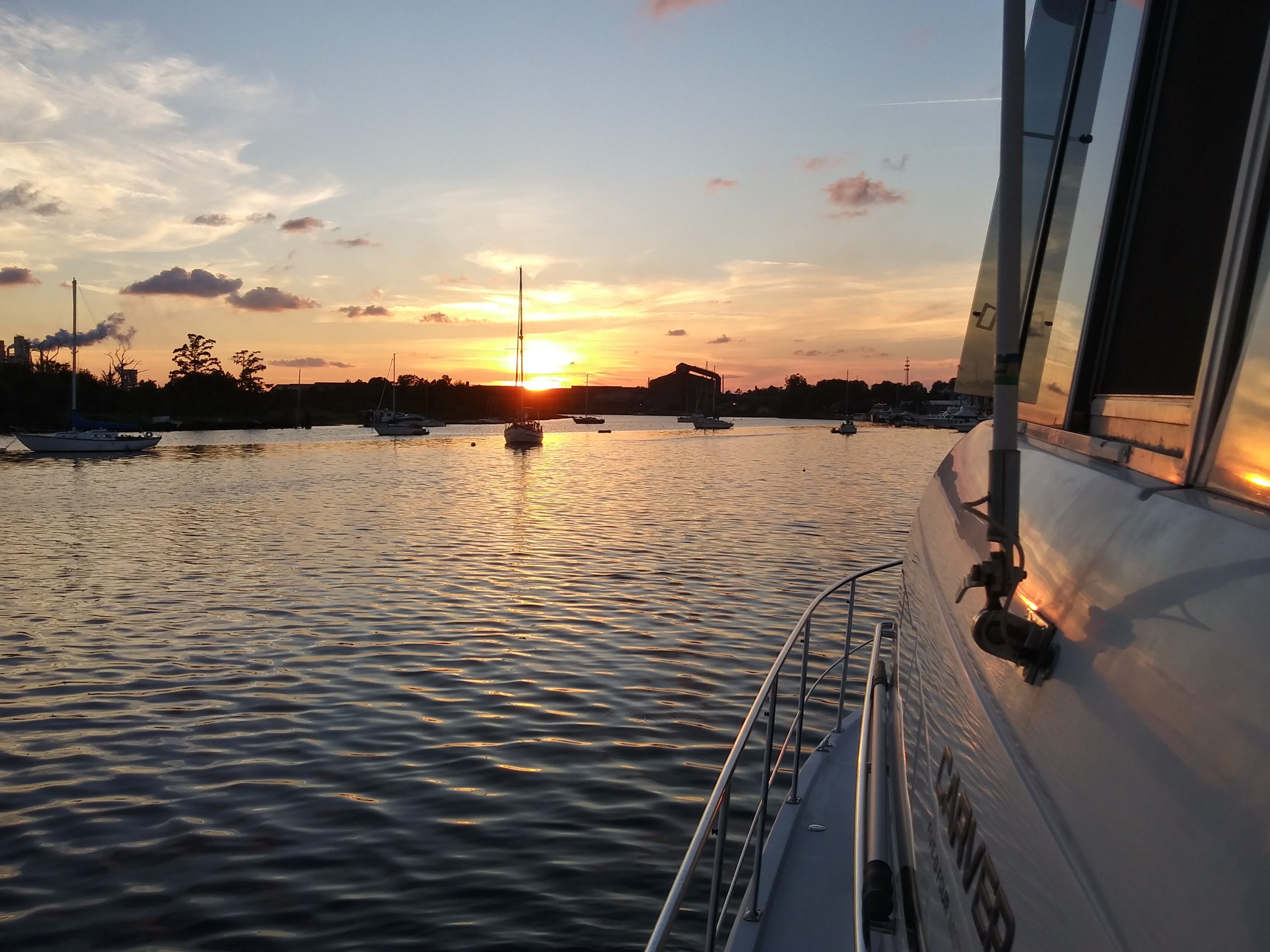 And can you believe it?

They should at least put up a statue of an alligator.

Anyway, we followed Saltie, who had stayed at the marina last night also, out into the Albemarle Sound.

Sam followed our breadcrumbs on the Garmin Chartplotter and went back out the same way we came in.

There was skinny water getting in here and one crazy turn could have kept us here longer than we wanted.

We went past the Alligator Bridge we had gone through the day before.

I heard on the radio, the bridge operator telling a boat that a vehicle had damaged the gate and he had to wait for DOT to arrive and fix.

So glad we were traveling in the opposite direction!

Once we were out in the Albemarle Sound, Sam decided to use some fuel.

He cranked it up!

Now sometimes this water can be dangerous.

But today the water was smooth and a great day for running the engines up.

There was hardly any traffic but we did spot this Catamaran.

We passed them upwind since they were under sail.

I also heard Sam talking to the Coast Guard.

I thought that we were going to be boarded and checked out.

But they just wanted a pass.

The Here’s To Us!! is Coast Guard documented and had a USCG inspection in January, but I was still a little nervous at the possibility.

We continued on toward Coinjock on this picture perfect boating day.

There were several crab pot boats working in and out of Alligator River when we were there but when we left this morning, there were none to be found.

I guess the crab are early morning risers.

We did see one of the boats working with traps as we went by.

With such a peaceful, uneventful ride, I was able to work on some videos and blog posts.

You can’t get much more peaceful than a sailboat on a slightly windy day.

I guess the Coast Guard finished up whatever they had going on because here they come back.

All we have left to get to our destination is to go under the Coinjock Bridge there and start looking for the marina on the right.

We got tied up at the Coinjock Marina and Restaurant.

All the boats dock along the front of the pier parallel-style.

There is music on Friday night and Sunday afternoon.

And of course, you have to get their famous Prime Rib.

We had to call and order it a day ahead.

It was worth it.

Having prime rib at the Coinjock Restaurant and Marina is just one of those Looper stops you have to make.