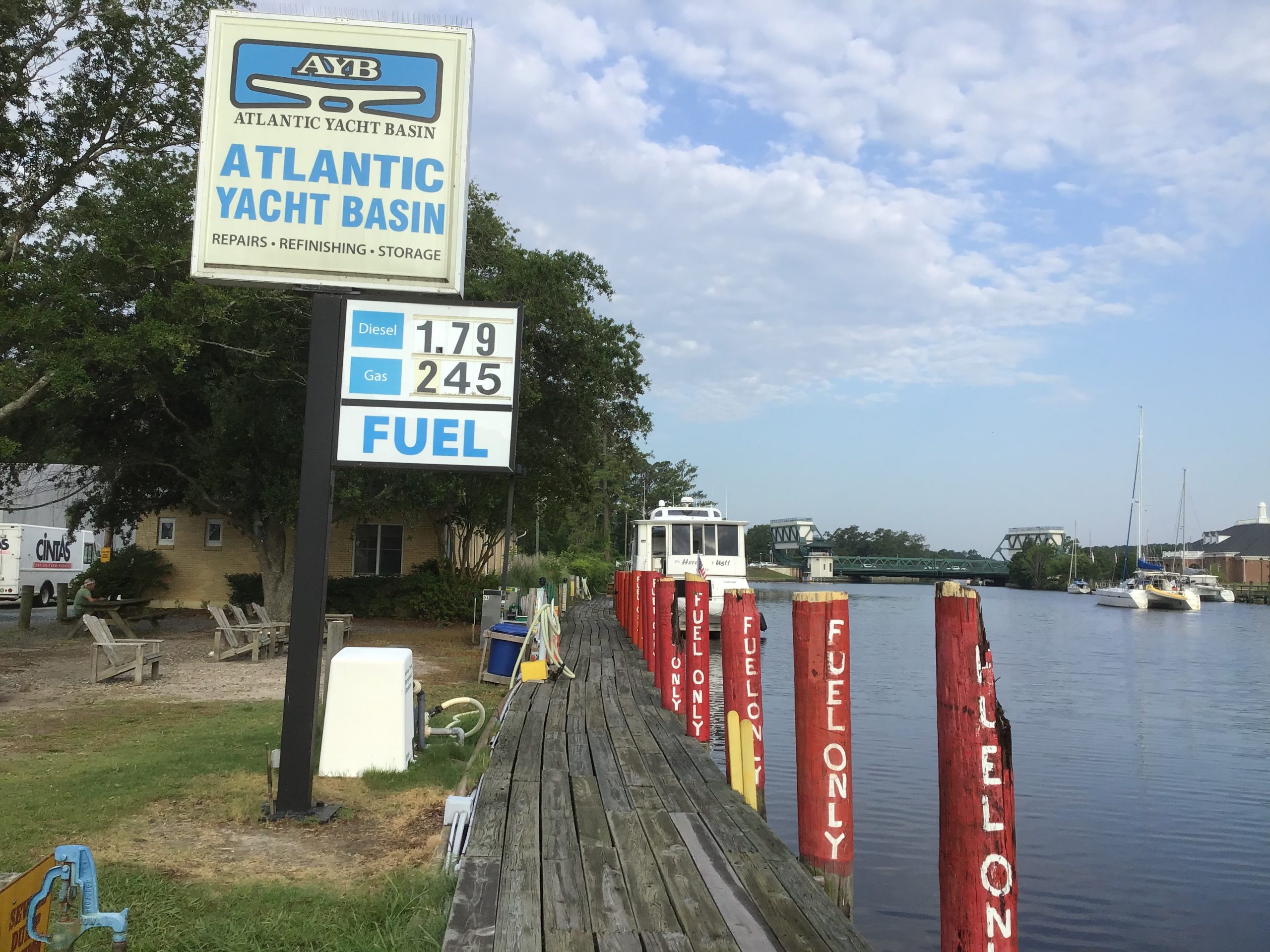 The Atlantic Yacht Basin Marina is a very short distance from the Great Bridge and Lock.

Yes, you heard that right.

We have another lock.

I’m not sure I even remember how to do a lock, it’s been so long.

The Great Bridge opens on the hour so we decided to leave at the 10 o’clock opening.

Sam had phoned the bridge operator to let him know.

Just as we were getting close a catamaran pulled out from the free dock and got in front of us.

We’re not in a hurry.

Just like clockwork, the bridge operator shut down the traffic and opened up the bridge at exactly 10:00.

Just beyond the bridge is the lock.

Now before you get too excited, this lock is only going to take us up about 1 foot or so.

But still, I have to get ready.

The lock master tells us to go to the port side and tie up.

There are rubber bumpers on the port side so you really don’t even need to put any fenders out.

Now the starboard side of the lock is steel so you definitely need fenders over there.

He also said because COVID-19 he couldn’t help us tie up.

To be honest, no one hardly ever helps us.

Maybe 2 or 3 times in the US and that was because of the construction going on in the rivers.

Now in Canada, they hire college students to help out and chat us up.

I really liked that.

Now, in this lock, there are no ropes or cables or pipes hanging down.

There are giant cleats on the top.

So I lassoed the cleat and ran the end through the cleat on our boat.

Sam kept the engines running and was prepared to use the thrusters if the wind caught the bow or stern.

But that never happened.

It was a quick ride up.

We left Lock #100 and I felt a little nostalgic.

I went from hating locks and dreading them to appreciating just what they do.

When you have to plan around tides in Florida and Georgia and the Carolinas, it really made me appreciate how locks work to keep the water level under control.

And that’s a good thing.

I can’t even believe I’m saying that!

After the excitement of the bridge and the lock, now all we have left to do is enjoy the trip.

We can get under the remaining bridges without an opening all the way to Norfolk.

There were some lovely condos and homes along the way.

On both sides of the water, there were so many great neighborhoods and boats to see.

Then things started to change.

The neighborhoods stopped and the industrial sites began.

Then the further we went, the more we saw.

It almost seemed like we were south of Chicago again.

It felt like we were going down the Cal–Sag Channel (short for Calumet-Saganashkee Channel) or at any number of places along the Illinois or Mississippi Rivers.

Look at this guy putting shovel-fulls of dirt (?) out of one container and into another.

Sam had our AIS turned on so he could see the big barge traffic staring to move.

And sure enough, there was a big one on the other side of this railroad bridge and second bridge that would have to open for tows.

There were two more tows and a barge heading our way.

Sam communicated on the radio to see which side they wanted him to pass on.

Sometimes they wanted port to port and some wanted starboard to starboard.

It just depended on how much room was on each side and how they could best maneuver.

We saw more bridges and could see some ships in the distance.

Check out this orange life boat on the back of Jorita.

How would you like to be in that when they put it into the water?

Everything seemed so alive in this shipping channel.

We were traveling on a Monday and it could have been a lot busier than it was but every tow and barge seemed like a big deal.

And what is this very interesting looking castle doing in the middle of the industrial area?

I wish I had a better picture of this but the tower in the distance says, Norfolk Naval Shipyard.

Looking out one side of the boat there were mysterious hangars and buildings.

On the other side, same mystery, different stuff.

Putting it all together, I had no idea what I was looking at but it was fascinating.

This is so mysterious, they have covered up parts of it.

And that’s how we spent the last few miles of the Intracoastal Waterway.

We decided to stay for three nights at Waterside Marina in downtown Norfolk.

This is where the first AGLCA Rendezvous was held in Spring 2019 that we attended one week before we started on America’s Great Loop.

We drove back to Baltimore after the conference pretty much freaked out with all that we didn’t know.

As you know, we decided to go anyway.

So, Norfolk is a special place for us.

We decided to spend our anniversary here.

Sam bought me 24 flowers for our 24 years together.

Right across from the marina is a park and downtown.

We spent a lot of time going over there to explore and eat at various places.

We had a fantastic time in Norfolk.