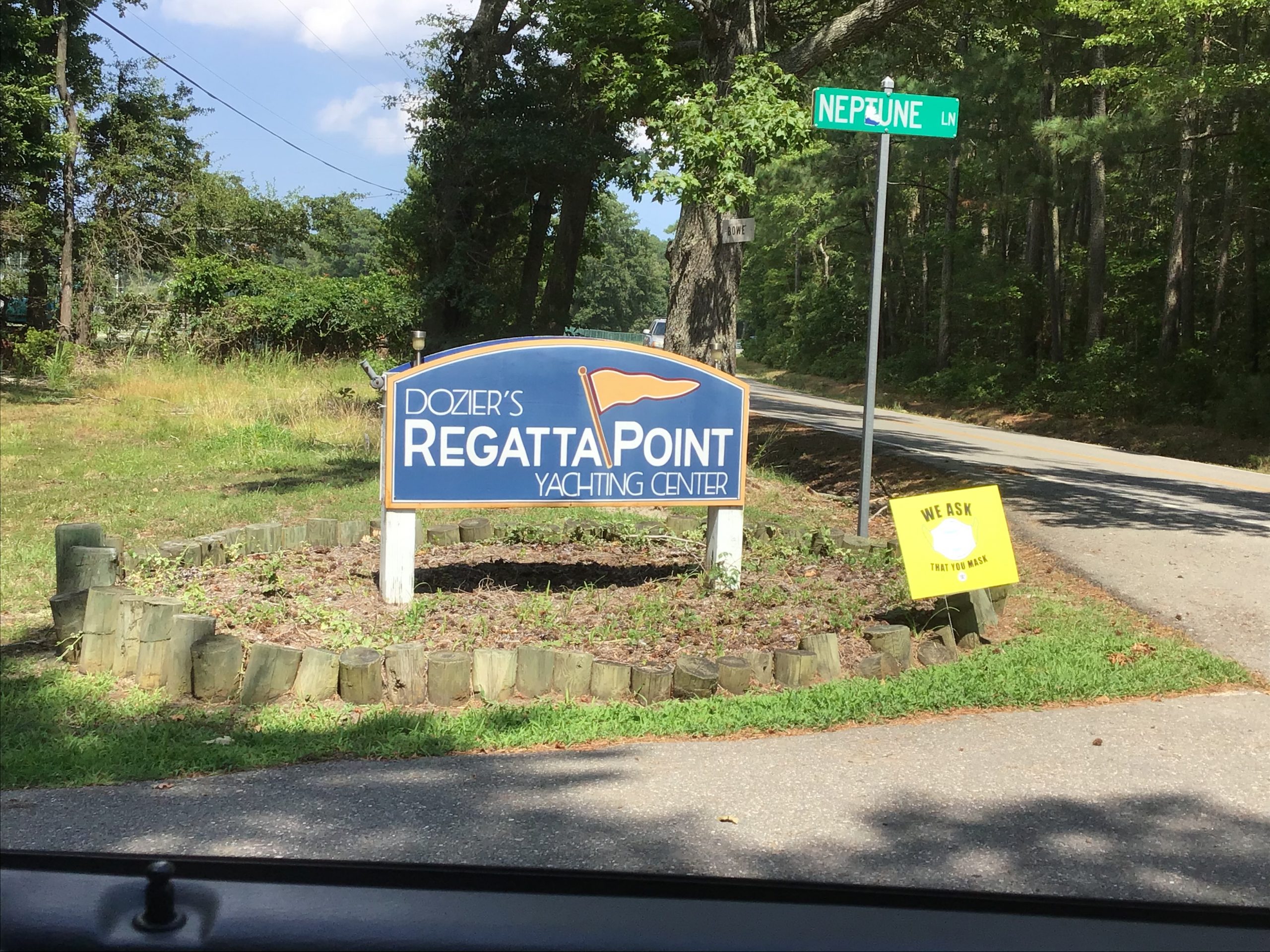 We stayed a couple of nights at Dozier’s Regatta Point Yachting Center.

It was a very relaxing stay.

We left on a beautiful day and are heading to Solomons Island.

It’s a hot spot in the Chesapeake Bay and we were excited to check it out.

So, we headed back out to the Bay.

We saw a few fishermen out as usual.

I had heard horror stories of Loopers out in the Chesapeake getting beaten up but we have had nothing but beautiful waters so far.

And unexpected sights along the way.

We spotted this very cool looking lighthouse in the water.

The winds died down after a bit and the water got even calmer.

What a fantastic day to be moving along on America’s Great Loop.

This was my view from the Lido deck.

We started hearing jets and seeing some very mysterious sights.

What is going on?

Right after we made a turn to the left and headed into the channel, Sam noticed that the port engine wasn’t responding to the port throttle.

Only one engine is working.

Well, I guess that’s the really nice thing about having two engines.

Sam started calling the AGLCA Harbor Hosts in the area.

The first one we reached, David, was a brand new harbor host.

The second one we called, Doug, uses a fantastic mechanic (Skip) and arranged for him to meet us at our stop, Solomon’s Harbor Marina at the Holiday Inn.

The mechanic arrived about 45 minutes after we did.

Can you believe that?

Sam correctly diagnosed the issue and Skip confirmed that we just needed a nut to go on a bolt and put it all back together.

The marina doesn’t have wifi but we found out that we could go into the Holiday Inn and use the wifi there.

There was an outside tiki bar that opened every evening at 4 p.m.

However, the public grill was unavailable and looked like a crime scene.

Apparently, someone killed some meat.

Or, you know, COVID.

The grounds were lovely and we had access to the pool right behind the fountain.

There was also a restaurant onsite.

But we didn’t need the restaurant because Sam was reunited with a U-2 brother, C.T. and his wife, Jan.

It was fantastic going to dinner with them and hear the stories.

We also had a visit from Paul on Snow Goose.

His boat is in Annapolis but he decided to ride his motorcycle over to Solomons Island.

Then, David, the first harbor host that we contacted when we were in trouble, came by for a visit.

He is planning to do the loop in a few years and is in the market for a boat.

Doug, the harbor host who helped us out, and his wife usually come to visit loopers but the COVID is keeping them away.

Overall, we had a great time at Solomons Island in spite of our boat issues.

Fortunately, that turned out to be a non-event, as Sam likes to say.