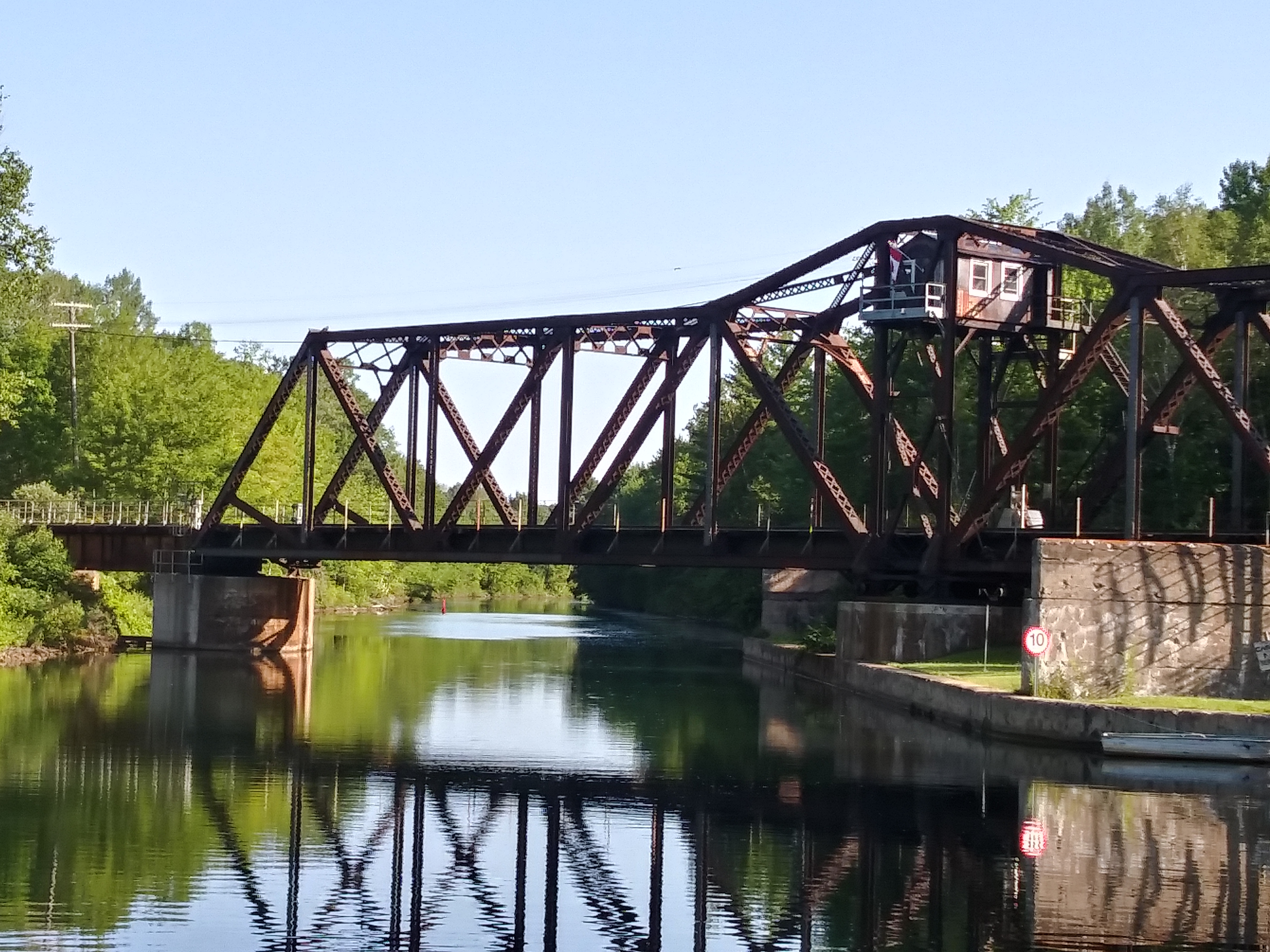 We left the Port of Orillia Marina about 7:15 a.m.

On a Canadian three day holiday.

We are officially nuts.

A while back, I told you that I had declared Sunday, Belgian Waffle Sunday because my sister got me a waffle iron and thought it should live onboard.

Since we left early, I certainly wasn’t going to get up earlier just to make waffles.

Out of the blue, after we were well underway, Sam suggested that I make Belgian Waffles.

After breakfast, we cruised along and our path led us to a channel.

I saw the fisherman on the right pull out a two-foot fish.

I have no reason to exaggerate.

It was really big.

But then we came to this.

There’s no getting under that!

We had to wait for the worker to come out of the little grey house on the left (out of view).

He walked across the bridge and halfway up the stairs to the little house on the top right when he remembered that he forgot the keys.

So we watched him walk back down the stairs, across the bridge, and to the little grey house and then back again.

Another exercise in patience.

It was a beautiful day and even better because there were only two locks.

We went through Lock 42 (Couchiching) and Lock 43 (Swift Rapids).

The end of the locks is near.

I don’t think I have ever seen as many wooden boats anywhere.

The channel is lined with cottages, boats, and vacationers.

When we were waiting to get into the first lock, we met a family on jet skis.

Darcy told us that we would be passing the guy who has the YouTube channel, Boating with Boogaboo.

That’s all Sam needed to hear.

The rest of the time he focused on finding him.

Yes, he navigated the boat but the primary focus was on mission: Locate Boogaboo.

They had just come through Lock 43 and were parking over on the side.

And yes, Sam was excited.

He called out to them and chit-chatted for a bit.

Meanwhile, I am all systems go trying to get ready for the lock.

I try to remain calm (not my normal state) while watching the front of our boat veering right.

Where the wall is.

I had to get fan boy’s attention.

That’s where the “marriage saver” headsets come in handy.

We keep hearing how lovely the area is after the Trent Severn Waterway but this country is incredibly beautiful.

We got to Big Chute Marina and planned to stay one night.

The real attraction is the Big Chute Railway (Lock 44) which we plan on doing tomorrow.

We walked over to check it out.

They take boats right out of the water and move them across the road.

We will conquer you tomorrow, Big Chute!