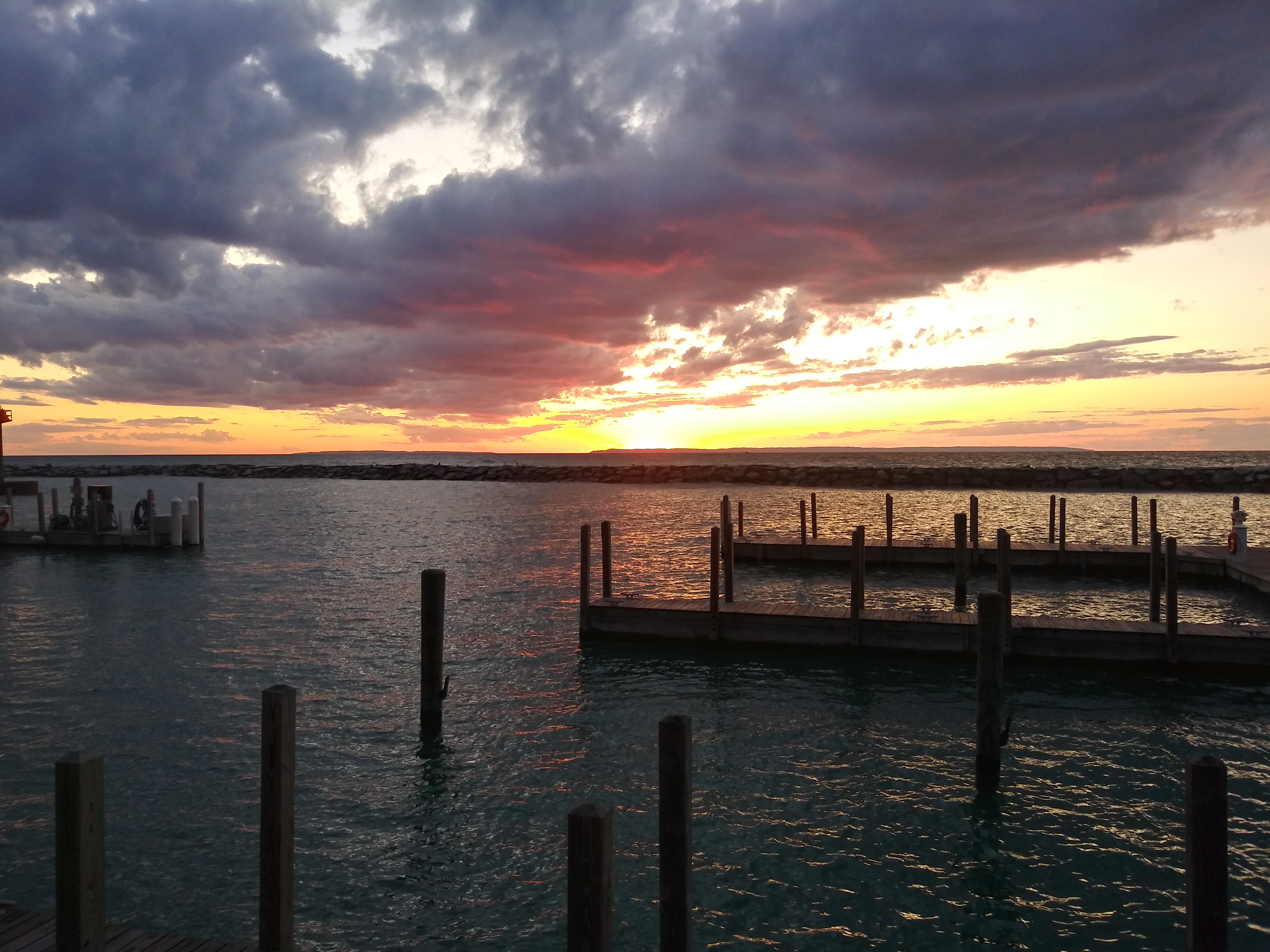 After being prisoners in Leland for five days because of the high winds, we were finally ready to move on.

It was still a little breezy but we thought the window of calmer winds could get us to our next destination.

Our Last Night in Leland

To celebrate our last night in Leland, we broke out the town’s favorites.

We had visited a farmer’s market and picked up a jar of homemade cherry jelly, a $3.00 “slicer” tomato, and a blueberry pie.

Now how two people think they can eat a whole pie is beyond me, but we bought it anyway.

We also went to the fish store and bought smoked salmon.

It’s a good think that we didn’t discover that salmon until the last day because we would have had it at EVERY meal.

It was that delicious.

So, we celebrated Leland with a tribute meal.

Thanks for giving us safe harbor.

And making it fun.

We fueled up before leaving the Leland Marina.

Next to the fuel dock is a public beach.

And out in the water near the beach were kite surfers.

Have you seen kiteboarding before?

That was our first clue.

It may be windier than we think.

It was so windy that I had a hard time getting the lines and fenders back in the boat.

When traveling, lines (ropes) and fenders come back in and are stored.

Lines are stored so they don’t fall off and get tangled up in the propellers.

Fenders are stored because they look tacky just hanging down for no reason.

Now when you’re doing the locks nothing looks tacky.

It’s a matter of survival.

Fenders are left out and lines where you need them.

I had to hold on to the boat railing as I worked to take off the lines and fenders.

At times, I just had to sit down and hang on.

I worked slowly one by one to get all the equipment inside.

In fact, I barely got them in the Lido Deck.

They traveled this way because it was too bumpy to store everything.

Once we got underway, we kept thinking that it would smooth out when we got around the next point.

And then the next point.

Maybe the next point?

It was pretty bouncy until we were about an hour away from our next marina.

Seeing those channel markers was a very welcome sign.

It was an easy docking experience in Frankfort.

The dockhands were friendly and helped us get set.

Once we were settled, we saw that there were many other loopers who had been waiting out the wind here.

There is also an anchorage with mooring balls and several loopers were there.

They were smarter than we were and didn’t venture out even though the winds were better, they will still bounce a boat around.

We are proof of that.

The town of Frankfort has many stores and restaurants within walking distance of the marina.

This was great news to us because we missed lunch due to the nature of the wave action.

No food or beverage service!

We walked down to Storm Cloud Brewery and got a couple of drinks and a small pizza.

Because walking to that brewery we went past an ice cream place that served Moomers.

It was Kawartha Dairy in Canada.

As the evening came to a close, there was a concert in the park by the marina.

It’s the beginning of Labor Day Weekend so everyone is in the mood to relax.

We’ve got to be moving on.

So we stay in and plan.