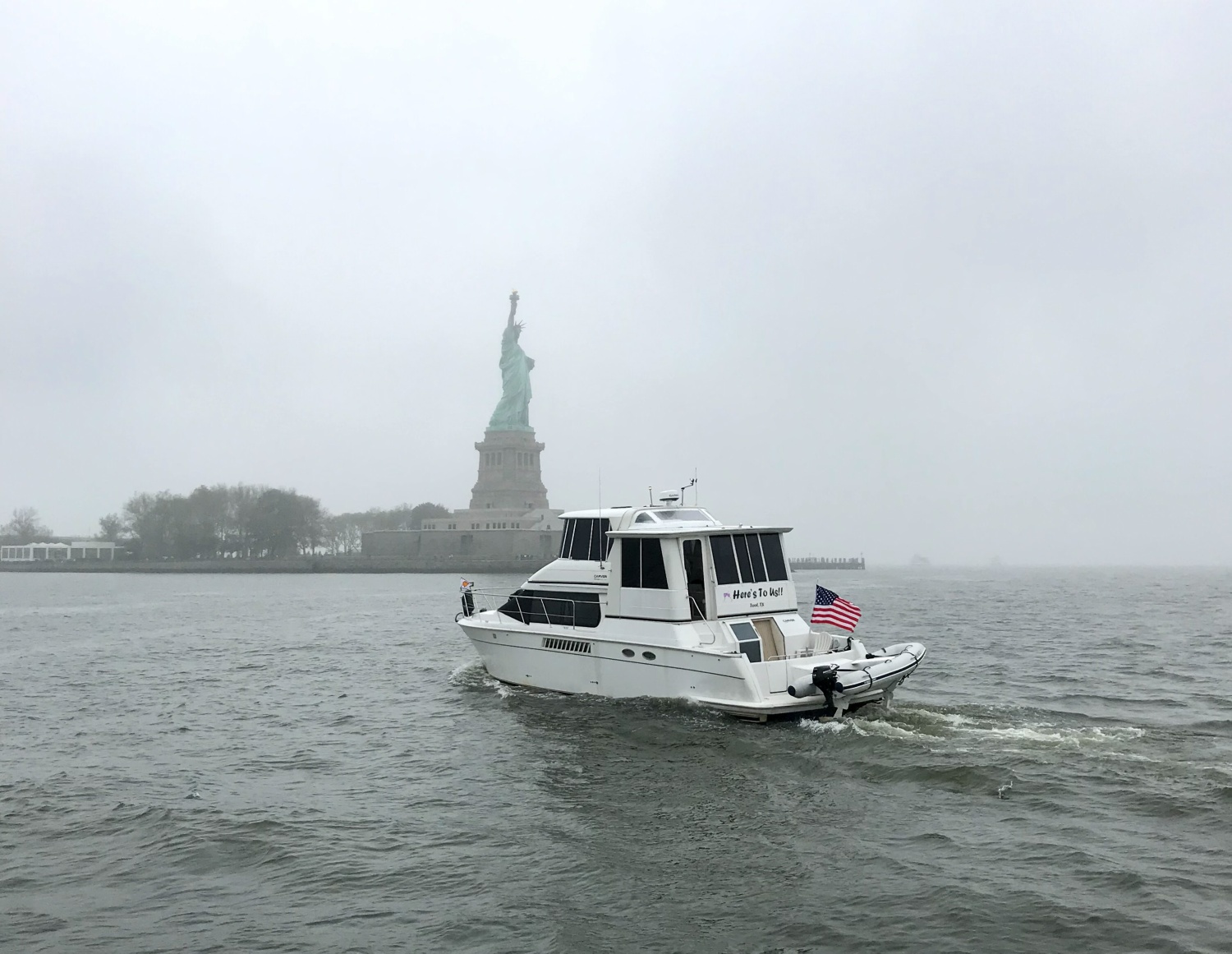 Now when Sam first started talking about traveling around the Great Loop, I thought he was crazy.

I also thought that he would lose interest and move on to another idea.

So, I started looking more closely at some of the stops we would make and the sights we would see.

I got excited about going to the Florida Keys, seeing Chicago from our boat and of course, being up close and personal to the Statue of Liberty.

This was really going to be exciting.

The Day Had Come!

Planning was in the works.

We had a buddy boat to go with us and take the “money shot” of our boat in front of the Statue of Liberty.

Then, I looked outside.

I could barely see 50 feet out.

I casually mention this to Sam.

Many times I heard mention a “Go or No Go” plan.

This is where the couple, if applicable, must both be in agreement before heading out to the next destination.

We, however, do not have such a plan.

Land of the Fog

We left Great Kills harbor in Staten Island and headed out around 7:15 a.m.

I may have mentioned to Sam about how foggy it was again.

Then, I mentioned it again.

How was I going to get great pictures of us coming into New York Harbor and Lady Liberty from afar?

Or even close up for that matter.

Sam kept saying, “Oh, don’t worry. It’s going to burn off before we get there.”

He would point and say, “See, it’s already better.”

What I actually saw was dense fog.

We saw through the fog there were large barges and ships but they were anchored and not going anywere.

There was no sign of kayaks, paddle boards or jet skis which I found out later dodging those could be an issue on a sunny day.

AIS is a digital VHF radio-based transponder system that can prevent collisions and can protect your boat from being run down by a huge, fast-moving ship, barge, etc.

Can you see how important this would be when it’s foggy?

And although there were only a couple of tense moments, we were never in danger and but was still fun to sing along.

This is what I saw.

But as we got closer, I could see her better.

And then a little better.

Until we were right there.

And immediately overcome with such gratitude for being an American.

If you haven’t seen the Statue of Liberty in person, make every effort to go.

You’ll feel what I mean.

On to Half Moon Bay

After that awe inspiring cruise, we went on to Half Moon Bay located in Croton on Hudson, New York.

It was still foggy.

I was still waiting for it to “burn off” as promised.

We finally arrived at Half Moon Bay Marina and Steve, the dock master, met us to help us get in the slip.

He gave us general info and a map of the area so we could find some fun.

We ended up renting a car from Enterprise (45% off for loopers) and ran a few errands, loaded up on supplies and felt normal again riding in a car.

We stayed a couple of nights and enjoyed beautiful sunshine the following day.

We had great fun at Docktails with other loopers and had a fabulous Italian dinner with our buddy boat friends at Fratelli’s Trattoria.

Even though we traveled in the fog, I was reminded by my sister on our buddy boat that this is our journey.

Our pictures may be foggier than some but this was our experience and I wouldn’t change anything about it.

I hope you treasure your days even when they don’t turn out as planned.