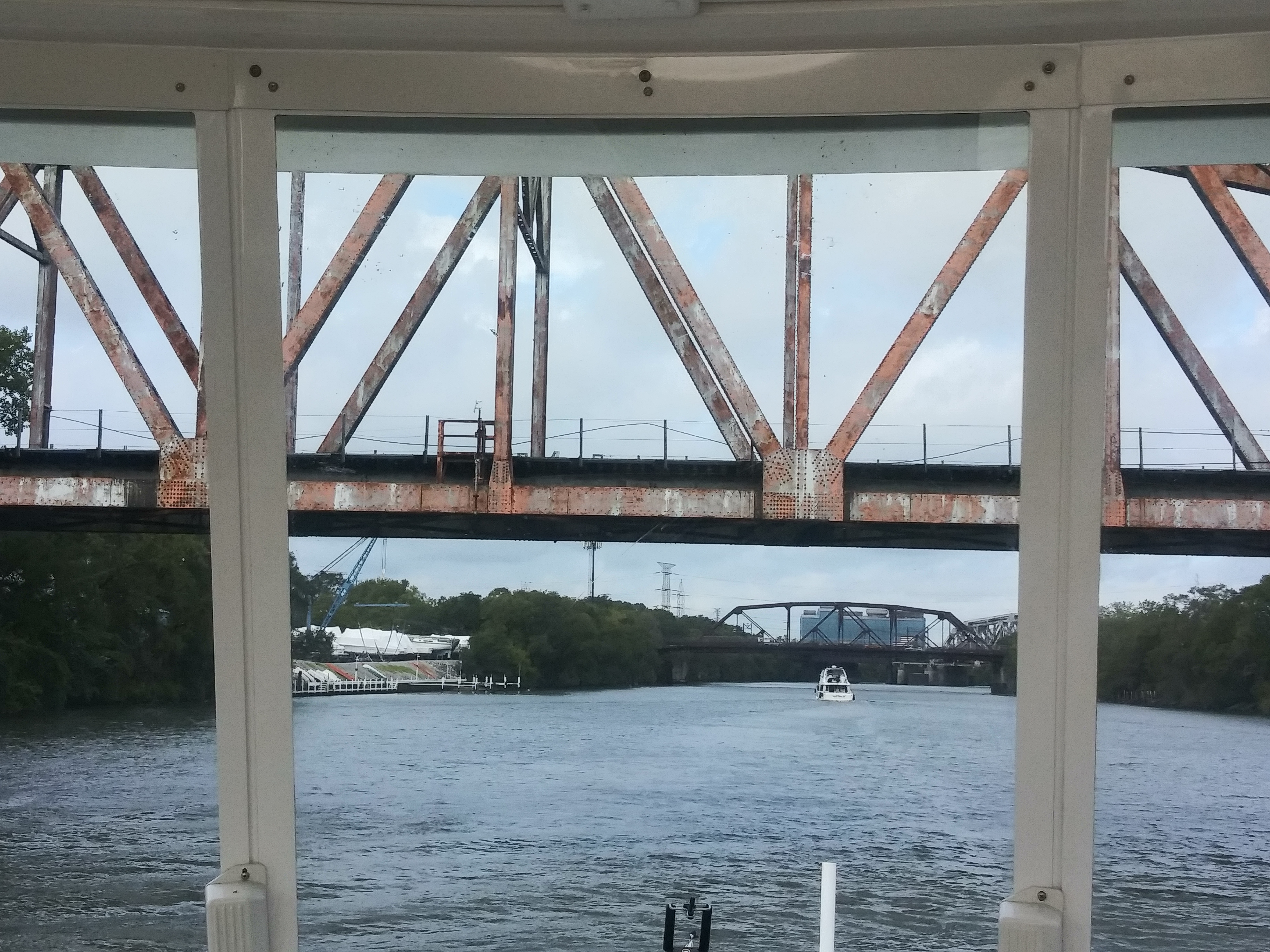 Have you ever had one of those days?

You know what I’m talking about.

When craziness starts to happen and you think, “I should have stayed in bed.”

This was one of those days.

We had already made arrangements to follow another boat this morning so there was no turning back.

Even though it was foggy.

After the engines were started, the lines were untied from the dock, and we were pulling out, I heard a pop.

There on the dock was one of our ball fenders.

Sam had to put the boat in reverse.

I jumped off and retrieved it.

No one is escaping that easily!

Once again the weather is questionable.

There are sprinkles and it’s cloudy.

And it just feels weird.

I can’t explain it.

So we pull out, again, make a right turn and see this.

This dredging machine is blocking the only way out of the marina.

Sam finally gets them on the radio and they graciously lead us out between the pilings to make sure the water is deep enough for us to pass through.

We get out to Lake Michigan and try to say goodbye to Chicago but it just wasn’t happening.

I can’t stay mad at you.

Friday the 13th AND a Full Moon!

The only way to explain how this day has started must be related to the date and the moon.

I’m not really a superstitious person but I’m married to one.

And the moon cycle has been known to make people go nuts.

So there may be something going on today.

We’ll have to see.

When traveling on the Great Loop, if you don’t take your boat through downtown Chicago, the alternate route is down the Cal-Sag Channel.

Going down this channel, you will find the lowest fixed bridge on the loop.

So we start our trek down the Cal-Sag and get to a bridge that has to be opened for us.

Idyll Time III calls and the operator has us wait about 10 minutes.

We are just happy someone is there to open it.

I wish I could tell you how many bridges we went under on this stretch.

So many different kinds.

Ones that raised up, some that parted above, and those we could fit under without any assistance.

However, there were some bridges, because of all the rain, we knew would be close.

So what do we do?

I crawl up through the porthole located on the ceiling of the bridge and climb on the top of the boat.

That’s right, my friends, I am now 17 feet above the waterline!

I fold down the weather vane and the anchor light.

I crawl back in and hear some clanking noise.

I folded the weather vane down the wrong way.

Back out the porthole, I go.

Once all is folded down correctly our boat height (air draft) is 17 feet 2 inches.

Our Garmin radar doesn’t come off, well, it can but we don’t want it to, so this is the highest fixed point that we measure from.

After that, we had no problems going under the bridges.

Today, we had to go through two locks.

The first was O’Brien.

This was the largest lock that we have traveled through, in fact, the lockmaster told us to float around in the center.

This sign was out there to remind us that everybody has priority to use the locks ahead of us.

This could take forever.

Next, it was time for the Lockport Lock.

When we approached, we knew there was going to be a wait.

We tied up to a large cement wall.

A gold looper, North Star, was already docked there.

We waited a couple of hours while the lockmaster put some barges through.

And then it was our turn.

As we untied from the dock, there were a few loopers that were behind us and went right in.

We really didn’t appreciate that but what were we going to do?

There were about seven of us that then raced to the wall in Joliet to get a space on the free wall.

While we were on our way, we heard a shout out to us from Dale, one of the bridge operators.

He had contacted us earlier via email and said he would be on the lookout for us.

It was a really nice surprise.

Joliet was a really nice place to dock.

Not only was the dock free to park at but they had free power.

The view was spectacular and there was a Harrah’s across the river.

Sam walked to breakfast at the Route 66 diner.

Even though Friday the 13th and the full moon tried to mess with us and people acted crazy, we survived and had a nice time in Joliet.