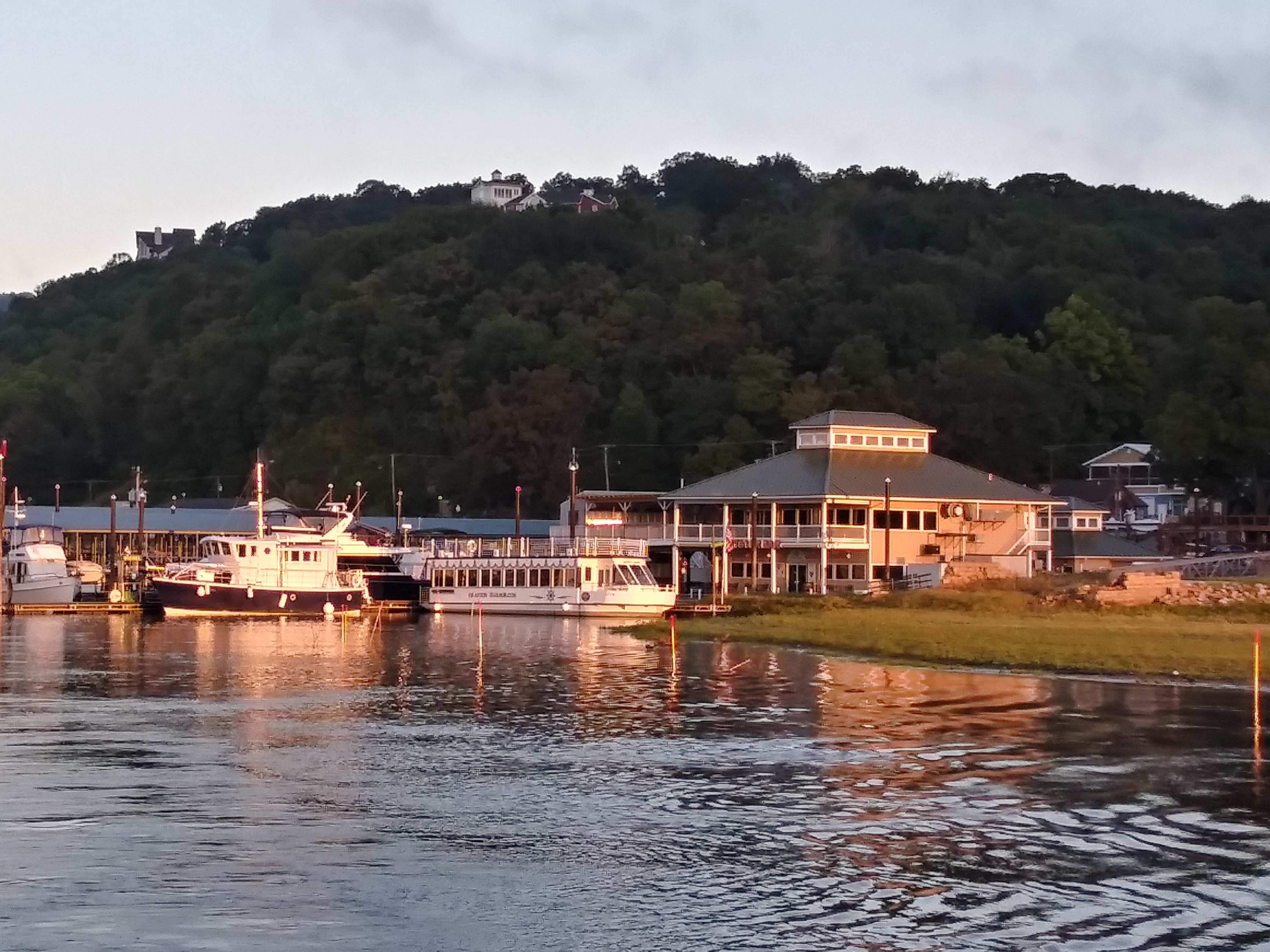 We woke up early and said goodbye to Grafton so we could follow a gold looper over to Polestar Marina.

Today is the day we haul our boat out to get that annoying bow thruster fixed.

There is something so peaceful about being on the river when the sun is just waking up.

As we left the Grafton Harbor Marina, the lighthouse on the edge is an impressive sight.

Right past the lighthouse, we saw the Spirit of Peoria docked.

We had seen it earlier on our trip while passing by Peoria.

It’s the kind of boat you would expect to see on the rivers.

From Illinois to the Mississippi

Leaving Grafton, we got back on the Illinois River and rode it downstream for a bit.

We then made a sharp right turn (almost a U-turn) and just like that, we were going upstream on the Mississippi River.

The path of the Great Loop is designed to help out with fuel consumption.

As much as it can.

You go down the rivers and the current helps carry you along without too much strain on the engines.

So on this short run, we faced the sunrise and then after the turn, we had the sun on our backs, and were going upstream for a few short miles.

Once we got to Polestar Marina.

The staff of Uncharted Service who were going to take care of our baby, had us dock on the side.

They took their time to get it out of the water properly.

We were really impressed with the time and attention that they gave this process.

Once it was out, we could see that the bottom job we had done in Baltimore needed some attention.

And we weren’t even here for that!

Check out our bow thruster.

This should look like a fan with blades all around.

All those plastic fan blades were ripped off in the Starved Rock Lock.

It didn’t take us long to assess that these guys really knew what they were doing.

So Sam took out his long list of items that he wanted done on the boat and we decided to head back to Texas for three weeks.

Our original plan when we left Grafton this morning was to get hauled out and have the bow thruster fixed, get back in the water and then head right back over to Grafton Harbor.

We had planned on going back home for a couple of weeks anyway to get a new roof, go to doctor appointments, etc.

This just pushed up the agenda.

Once we decided to go, we were gone.

We were back in Dallas traffic by early afternoon.

While we were home, we got a new roof due to a previous hail storm.

We had to find another lawn service and fit in several appointments.

We were also able to meet with Paul Michel, our financial adviser.

Paul is gifted and helps us understand the complicated world of finance.

We were glad he could meet with us when we were in town.

As a binge watcher of American Greed, I am more than skeptical of anyone when dealing with money.

I also know that it’s really hard to find a financial adviser that you can trust.

We have found just that.

One night we stayed at the Stoneleigh Hotel in Uptown a few blocks away from the Dallas home that we sold.

We decided to walk down to one of our favorite restaurants, Coal Vines.

As we were sitting there, in walked Jerry Jones, owner of the Dallas Cowboys.

I walked up to him since I had already had a generous glass of Cabernet.

Mr. Jones was very gracious and offered to have his driver/ body guard take our picture.

Keep Our Home vs Sell Our Home

Since we started the Great Loop we are forever toying with the idea of selling our home.

And we have met many loopers that have done just that.

Owning a home has a lot of responsibilities associated with it and trying to address issues long distance is sometimes a challenge.

We are blessed to have friends, family and neighbors who help us out.

The biggest reason that we haven’t sold is that it is nice to have a home base to go to and regroup.

We reconnect with our friends and family and that’s really nice.