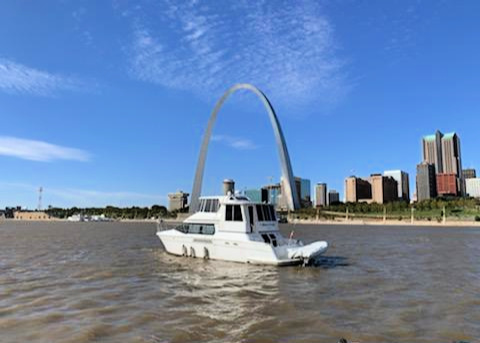 It was time. We had to say goodbye to Alton. Our buy 3 nights get 3 nights free deal was over.

We picked up two boats who were traveling our direction, Whiskey Business and Saltaire.

Well, right out of the gate, there’s a lock.

Usually, I have to get mentally prepared.

Make sure I have everything.

But there wasn’t really time for that this morning.

Sam was the leader of the pack and had already communicated with the lock master.

So we left Alton Marina, went under the Clark Bridge and right into the Mel Price Lock.

To say that there was a lot of debris in the lock is an understatement.

I told Sam NOT to use the thrusters.

We just got our bow thruster back and I didn’t want to take any chances.

As we made our way in, there was a kayaker right in front of us.

He grabbed on to a ladder and we took the floating bollard behind him.

We barely noticed the lock going down. I think it was only about a foot.

Not bad at all.

As we excited the lock, there were definitely currents and eddies (circular currents and whirlpools) fighting against us.

The Mississippi is messing with us.

As we continued our journey down the Mississippi, we saw what we had seen before.

When is this going to end?

I’m guessing not for a while.

You know, I’m not a fan of locks, but its just part of the experience.

We had one more to get through before our final destination.

So, first Sam called the lock and they couldn’t hear him.

Others could hear both Sam and the lockmaster.

Finally, one of the tow captains relayed the info.

I was afraid we would make the lockmaster mad and we wouldn’t get through.

But that didn’t happen.

We did have to kill a little time before we were able to go in.

Dodging logs, barges and other boats, we wait.

When we got the green light and finally went in, we had to go to the front floating bollard because there was one missing (the one we would have chosen).

We hooked up to the first bollard dangerously close to the front gate.

So close that the lockmaster came over in his little cart and told us we had to move back about 5 feet.

We had to continuously keep a distance behind the bollard.

Sam used reverse and the thrusters.

It was hard to hold us near the lock wall behind the bollard.

But we did it.

When it was time for the gate to open, the lockmaster told us to move back even further.

There was only one time that I couldn’t wait to get out of the lock because it was so uncomfortable.

Now this was the second.

Our reward for going through two locks was seeing the St. Louis Arch up close.

We started seeing that wonder at a distance.

One of the highlights of doing the loop is going by the St. Louis Arch.

Now that we have done it, I know why.

A friend of ours sent us a picture of our three boats (Here’s To Us!!, Saltaire, and Whisky Business) when we were right in front of the arch.

We had been through two locks, we had seen the arch, now all we had to do was get to Hoppies.

Hoppies is a looper highlight.

It kind of reminded me of being at the Logsdon tug in Beardstown.

The gentlemen that helped us tie up were fantastic.

In fact, one of them showed me how to work the side rail that I have been fighting with since we got the boat.

I am so grateful to have that information.

After we got settled in to Hoppies, we took a walk over to the town of Kimmswick.

What a great place!

There are several little shops and fantastic restaurants.

The Blue Owl has the most incredible apple pie you have ever seen.

Smokee Robinson has a BBQ place with delectable ribs.

It was so good it left me speechless.

This area has really been hit with floods but the people are resilient and it will be rebuilt better than it was before.

Put it on your list of places to go and see.