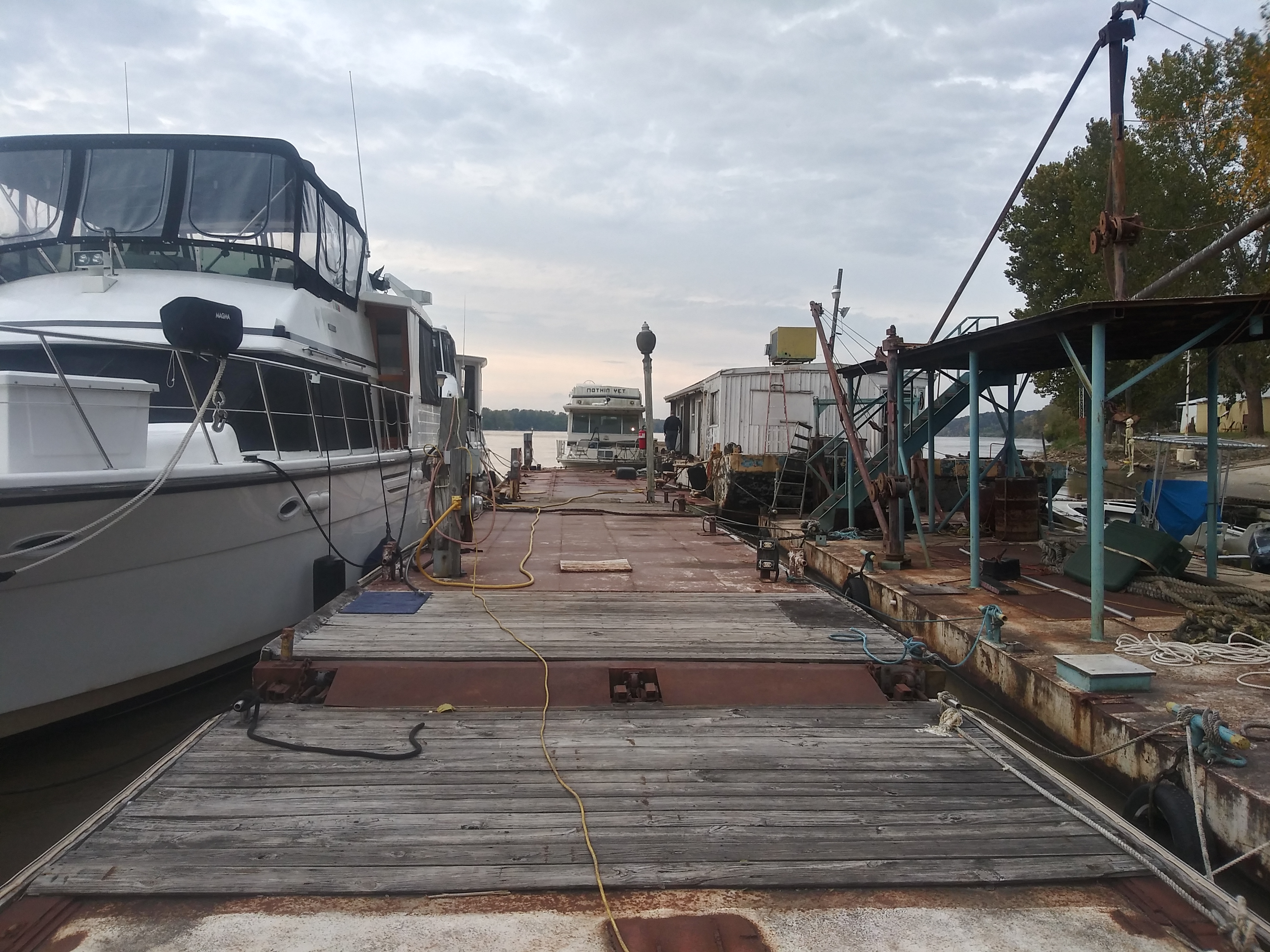 We had such a great time in Kimmswick.

We got parked at Hoppies early enough to get to the Blue Owl Restaurant and Bakery before they closed at 3:00 p.m.

They have a famous Levee High Apple Pie and you have to see it to believe it.

But then when you taste it, oh my.

We had ribs at Smokee Robinson’s and yes, I think I heard the angels singing for that, too.

It’s always promising when you get out of bed, stumble into the salon and are greeted with the sunrise.

Another beautiful day on the Mississippi.

Hoppies Marina is one of the places that we heard about early on when we first started studying the Great Loop.

There was room for three large boats tied up to an old barge.

There were three more barges but they lost them during the flooding a few months back.

We were so glad that they still had one barge and could take us.

One of the perks of being at Hoppies is the hospitality.

The gentlemen that helped us tie up were kind and professional.

Debbie, Fern’s daughter, gave our captains a briefing on navigating the Mississippi during these high water conditions.

It’s very helpful to have local knowledge to help us out.

We are traveling with Whisky Business and Saltaire today.

The fall colors along the Mississippi get prettier every day.

We are passing barges but we get to have beautiful scenery as we travel down.

It was about 69 miles from Hoppies to the Kaskaskia Lock Wall.

The lock was closed and no boats or barges went through while we were there.

About 9 boats tied up along the wall.

And one boat anchored out.

So there were 10 boats that spent the night at the Kaskaskia Lock.

There wasn’t any power but we were grateful to have a place to dock for the evening.

There wasn’t anywhere to go or anything to do at the Kaskaskia Lock.

That’s never been known to stop Loopers from socializing.

Whisky Business invited us and Saltaire over for Bloody Marys.

We didn’t get the text for a couple of hours so by the time we showed up, their glasses were empty.

Love it and hate it.

After the bloodies, we were invited back over later that night to watch, The Big Lebowski and have White Russians, or Caucasians, as The Dude referred to them!

The preferred drink of The Dude.

Sam decided he was going to dress up like The Dude and wore his PJs, robe and slippers.

Embarrassing and hilarious all at the same time.

You can probably see why.