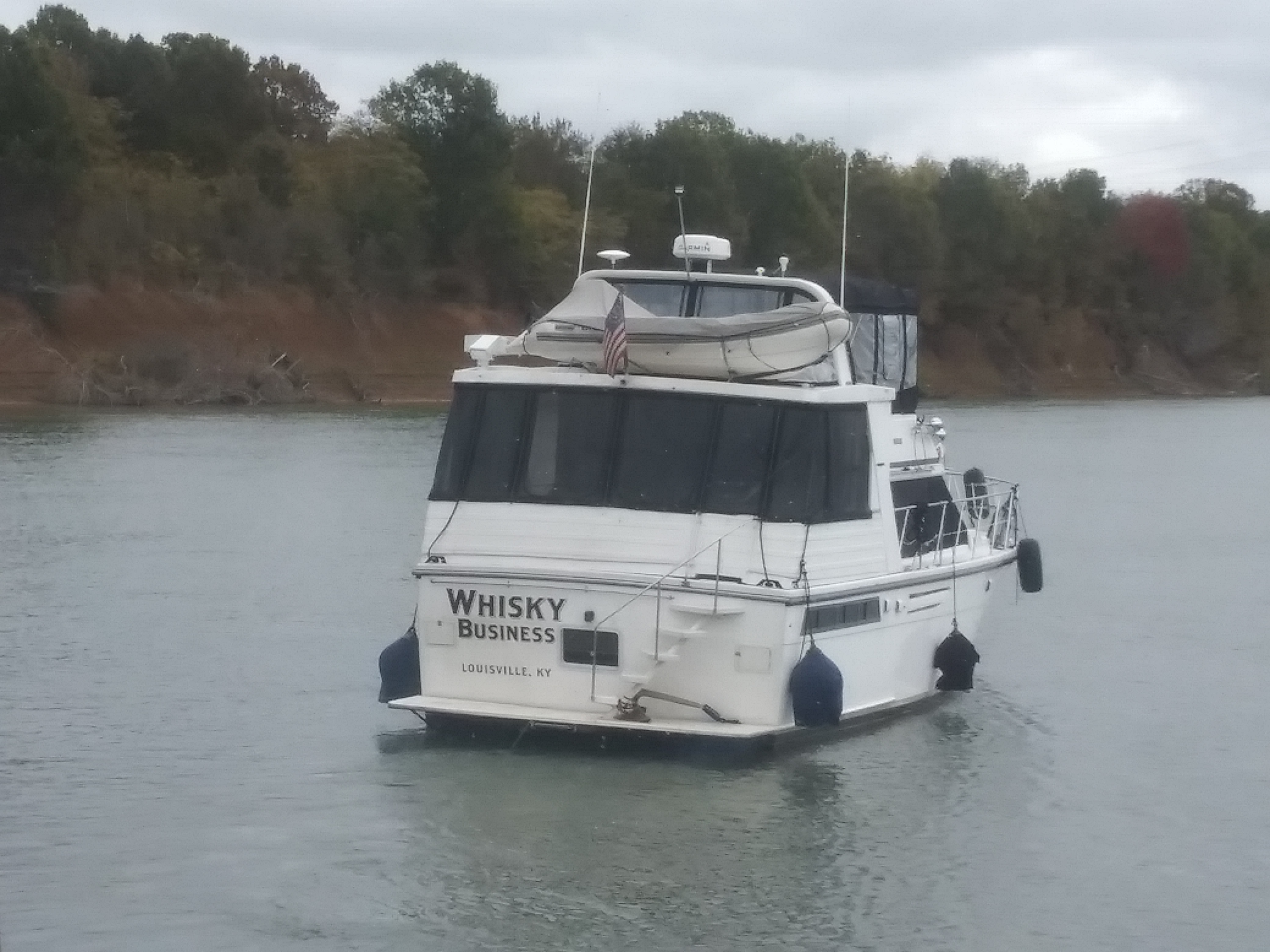 Today is the day!

Jerry and Debbie Rogers aboard Whiskey Business will cross their wake and officially finish the Great Loop.

It’s the goal of every boat that starts the loop.

Few attempt it and then accomplish it.

Also, we see people on the Great Loop Facebook page finish the loop all the time but we have never been there when it happened.

The plan the night before was to meet around 10:00 a.m. and then maybe pull out sometime around 10:30 or even wait until noon.

We were going to have to go through the Kentucky Lock to get to Green Turtle Bay in Grand Rivers, Kentucky.

Many Loopers before us were having to wait three, six, eight plus hours depending on the day or time.

If we couldn’t get through until all the barges after 5:30 p.m., there was no reason to go early.

Neither one of us were ready to present ourselves to the world but Sam took one for the team and went out in his pajamas.

Jerry had called the lockmaster and found out that if we could get down there, he would lock us all through.

Time to get going!

So we left Paducah much earlier than we intended.

I have very few pictures of this part of the trip because I am still working my YouTube hacking situation.

I’m working through the five stages of grief and I’m pretty mad today.

We had a plan.

Jerry would be the one to talk to the lock master.

They are both from Kentucky so we thought that would work to our advantage.

Plan B was to have a female voice on the negotiating end.

Fortunately, we didn’t need Plan B since Jerry was able to get us through with very little wait time.

We did have to wait for a barge to come out of the lock.

After the lock, the time had come.

While they started their journey in Louisville, KY, they intersected the Loop route in Green Turtle Bay Marina.

Just south of that is the Barkley Canal, so as we turned into the canal toward the east, there was a spot where they had crossed it going westbound.

After that significant event, we headed up to Green Turtle Bay.

And a great place for a celebration!

A boat participating in the Great Loop during the first year dons a white burgee from the America’s Great Loop Cruisers’ Association.

Once you cross your wake, you get to fly the gold flag.

It’s a sign to all other loopers that you have made it!

Whisky Business was prepared and had the gold burgee waiting for them at Green Turtle Bay.

Jerry opened a bottle of their favorite champagne and poured us all a bit in red solo cups.

How’s that for sharing your success?

They also had been saving a special bottle of bourbon that had their boat etched on the front.

And they shared that, too!

Congratulations to Jerry and Debbie for this incredible accomplishment!

The Green Turtle Bay is not just a marina but it is an entire resort complete with a couple of restaurants, a spa, ship store and more.

We decided to take advantage of their buy 5 nights, get 2 nights free deal.

This is the place to spend a week!

They have a couple of courtesy vans that we were able to take out.

Green Turtle Bay also has a Yacht Club that they gave us a membership card to get in and have a fabulous meal.

And the beauty of the resort was breathtaking.

The resort is located in the town of Grand Rivers.

This little town doesn’t even have a gas station but is golf cart friendly and has the most incredible holiday lights display that rivals any city.

It’s a bit early but who cares?

It put us right in a festive mood.

We really enjoy staying in one place for several days.

This week we were able to celebrate a major accomplishment, enjoy our friends and make some new ones.

We were able to relax, enjoy a part of the country we have never seen before, and appreciate the people that call this place home.

It was nothing short of incredible.