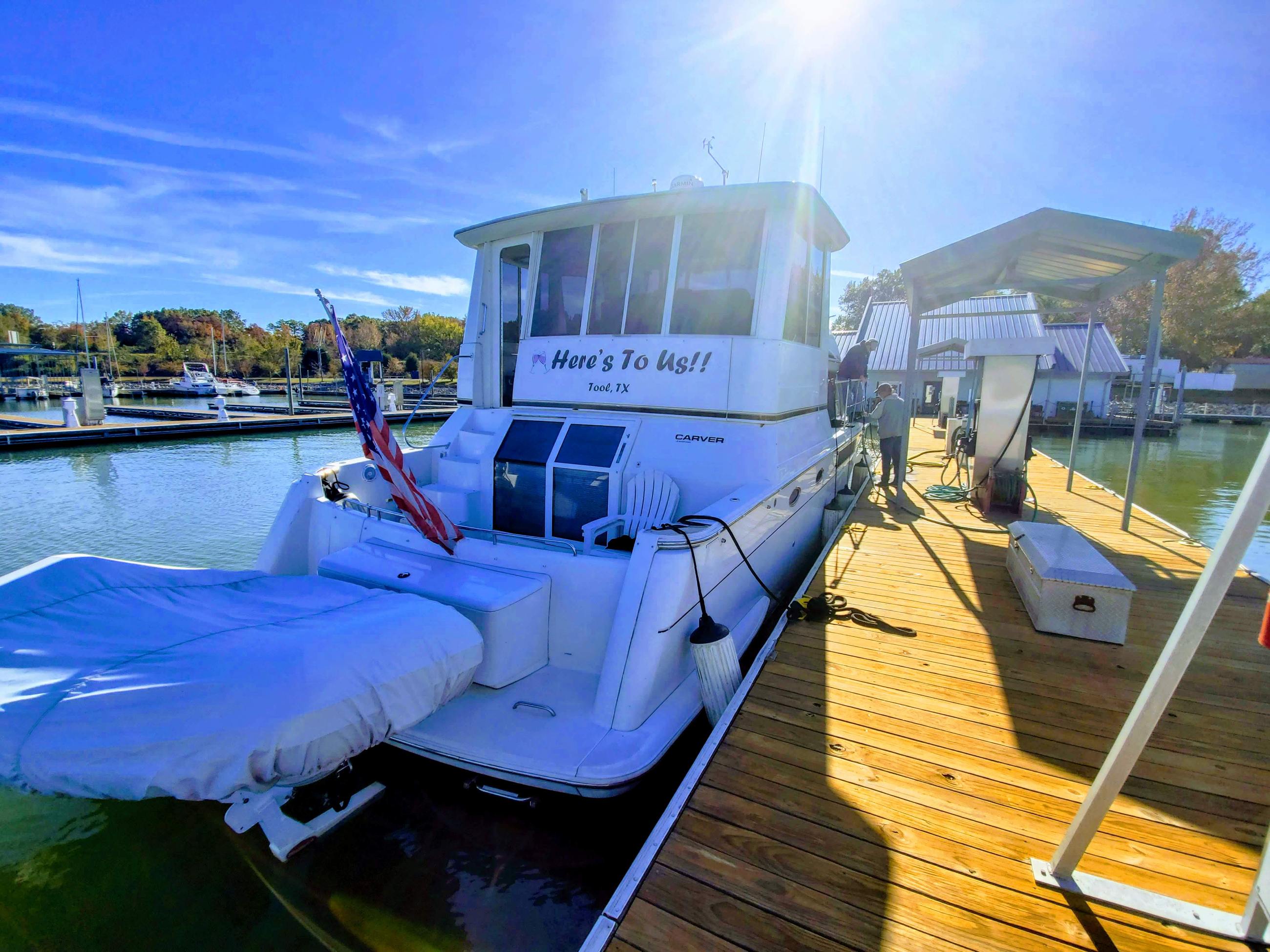 Today is going to be a very long day.

We are planning to travel 95 miles from Paris Landing Marina to Clifton Marina.

I dread these long days but we were blessed with a beautiful sunrise.

Did I mention it was chilly?

I have never seen Sam bundled up like this while operating the boat!

As we continue down the Tennessee River, we have seen a lot more homes along the shore.

Some are build up high in the hills.

We also spotted a bridge to nowhere.

At least we don’t have to worry about getting under it!

Along the way we also saw a few barges tied up to mooring cells.

Then, we went past a town called Johnsonville.

I continue to be fascinated by all the different bridges on the loop.

Check out this one we saw today.

It was actually two different kinds of bridges right together.

We saw quite a few fishermen out today all over the river.

At first we thought this was another fishing boat.

Then we got a little closer and saw the diving flag.

No one on the boat.

I bet it’s cold down there.

And of course, what would a boat trip be without some spectacular fall foliage?

Some portions of the river, looked more like a lake that had laid down.

We did see a few barges while on our cruise.

Sam had to adjust our speed and slowed way down when we saw this barge.

He waited for him to get under the bridge before he called him on Channel 13 to ask for passing instructions.

We did into a couple of barges that we had seen on previous trips.

We also saw a dredging machine in operation.

Homes on the River

As I mentioned earlier, we have seen more homes along the Tennessee River than we have on other rivers.

Some up high on stilts.

Some up high on hills.

Some down low close to the bank.

Others in communities along the river.

It just never gets old looking at all the different homes along the Tennessee River.

Right after we went past this barge, we saw something that we had never seen before.

A boater in about a 20 foot runabout was waving an oar in the air to get our attention.

Sam pulled over to see how we could help him.

He was pulled over to the side but the water was deep enough that we could reach him.

I threw him a line off our stern and we started pulling him to the Clifton Marina.

The boater saw a pontoon boat that was heading our way.

He decided to let go of our boat and let the pontoon offer assistance.

So we went on to the Clifton Marina.

We visited with him later after his rescue was a success.

What a nice surprise!

We met a couple other boats here for Docktails and dinner.

A very pleasant way to end our very long day.