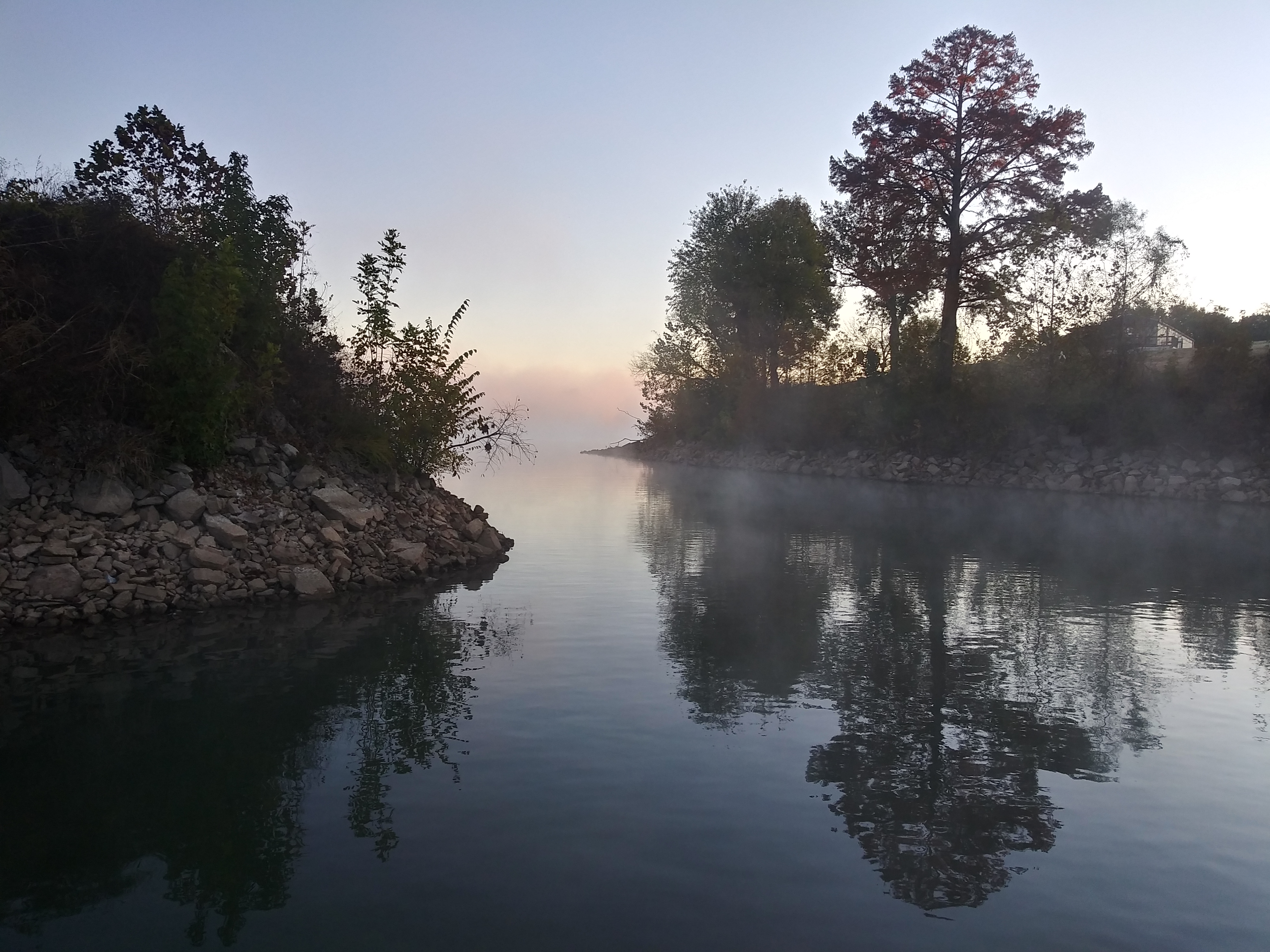 We were warned when we checked into the marina.

We really wanted to leave early but the marina owners said it probably wouldn’t be possible until after 8 a.m.

But everywhere we looked.

Fog was rolling around.

So we walked to the top of the hill so we could see the river.

It was strange not being able to see the other side of the Tennessee River.

Obviously, we had to wait.

The fog burned off and it was a beautiful day.

You want a clear day to see the barges.

And the beautiful homes along the river.

And the sun did smile at us.

We traveled today with Vitamin Sea.

Homes Along the River

We saw several communities along the way.

Homes up high on the banks of the river.

We also saw evidence of storms that had been in the area.

An entire deck was hanging on the side of the cliff.

A roof was on the ground.

Very sad but there is evidence of cleaning up and new building.

And then we saw something that we had never seen before.

A pontoon boat pushing a boat house with a man standing on the dock.

How crazy is that?

As we continue to cruise down the Tennessee River, we enjoyed the sights and the weather.

We tried to enjoy ourselves but we were nervous about the Pickwick Lock.

We knew several loopers that had to wait for hours and others who had to wait until it was dark to go through.

So we were dreading it.

The Pickwick Lock is an 84 foot drop for us and could not have worked out better for us.

There was a barge coming out.

And once it was clear, we went right in.

I remember when I was overwhelmed with our first giant lock on the Erie Canal.

Now I wonder when that happened???

After we exited the Pickwick Lock, we enjoyed the houses and apartments in the hillside.

What an incredible place to live.

And we followed it until we got to Grand Harbor Marina.

Half of the marina is in Tennessee and the other half is in Mississippi.

We were lucky enough to snag a covered slip and so grateful because rain was coming our way.

It can’t be a good sign when the marina covers up the flowers to protect them from the freeze that’s on its way.

We were able to take their courtesy car in to town to eat at Freddy T’s.

We stayed in Grand Harbor for several days.

We let the rain pass.

It was still a bit cold but it was time to move on down the river.