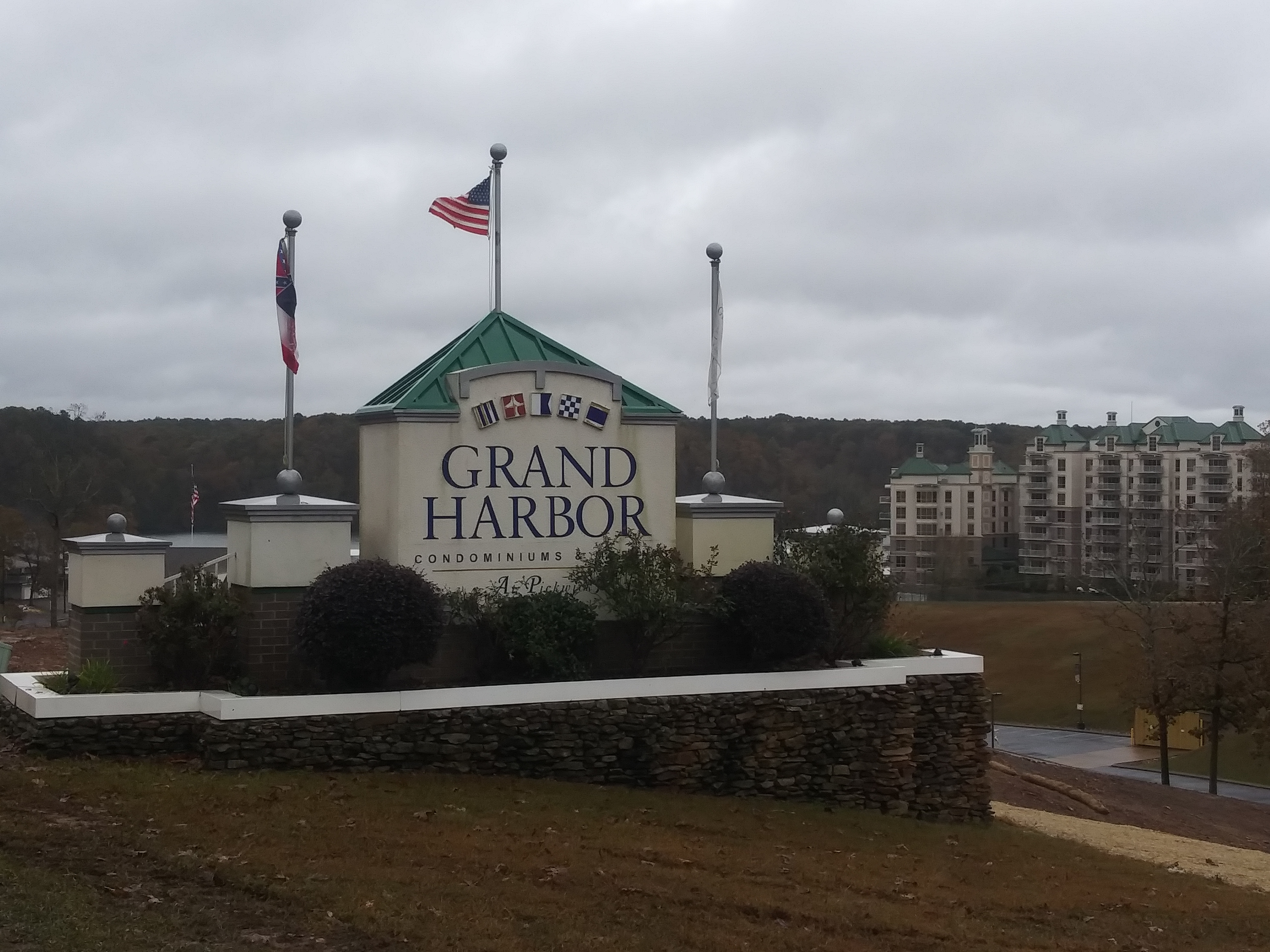 We traveled with B-Side and left Grand Harbor Marina at about 7 a.m.

I went up to the bridge and Sam and I were chatting having a great time.

Then, thankfully, we noticed, our boat wasn’t near the dotted line we were supposed to be following on the chart plotter.

What is happening here?!?

What kind of leading is this???

Anyway, Sam made the adjustment and radioed back to B-Side that we had made a “course correction.”

The Cruise to Fulton

The morning was a partly cloudy, chilly day.

And we watched the world on the Tennessee-Tombigbee River wake up.

Such beautiful houses along the river.

Their boathouses were large and some were garage-type to keep the boats protected.

Such a lovely ride.

The Tenn-Tom is an historic waterway.

The rock edges of the Tenn-Tom show clearly the draw-down to winter pool level.

In the winter, the pool is 5 feet lower than the summer level.

At the time we went through, it still had one foot above winter pool level. Notice the difference in the rock coloring.

The Tenn-Tom is considered a National Marine Highway.

In the 1900s a number of studies produced various plans and in 1946 one plan was approved.

In 1971, President Nixon approved $1M USD to start work on the waterway.

Baffles along the Tenn-Tom to control gushing of water run off.

A trip from Pensacola to Chattanooga is now 770 miles shorter than going up the Mississippi against currents.

With the rivers running into it and the waterway itself, there are more than 4,500 miles of navigable waterways, 15 ports and 10 locks that have a tremendous economic impact.

In our experience, the Garmin “Auto Guidance” is not very reliable drawing a route.

We do run a separate Navionics program and it’s “Auto Routing” function is much better in our experience, but again, one needs to oversee where it is going.

For almost 90% of the river navigation, we did not couple the autopilot to the magenta line.

Instead, we used the “Heading Hold” function of the autopilot.

Waiting for a Lock

When we had called the lock master of the Whitten Lock earlier in the day, he said we wouldn’t have a problem and should be able to go on in.

Well, a tow barge came from the other direction and messed with our plans.

We had to wait.

Although, it was quite lovely.

We finally made it in and locked through.

Anything to Slow Us Down

You know those days where it seems like you’re in quicksand?

You can’t get anywhere fast?

After our lengthy wait in the Whitten lock, we then run into a dredging machine that has it’s equipment strewn all over the river.

Then, after we get past it, a tow barge calls us and asks us to pull over and wait until he gets past us .

Just waiting on the lock, the dredging machine and the tow barge seemed like it added so much time to our already long day.

After those slow downs, our luck then changed.

We were able to get right into the Montgomery lock.

And then we got right into the Rankin lock.

And the other barges that we passed were easy going.

On this stretch of the Tennessee-Tom River, there were several places where there were trees growing out of the water.

It looked so weird.

We finally made it to the Midway Marina in Fulton, Mississippi and we were rewarded again.

The replica ships, Nina and Pinta of Columbus days, were parked there for tours.

So that’s exactly what we did.

But not the Santa Maria.

It was too big for them to make a replica of so they stopped after the Nina and the Pinta.

Look at all the knots those sailors could tie.

The Nina and the Pinta are going around America’s Great Loop just like we are.

Isn’t it interesting who you can meet out here?