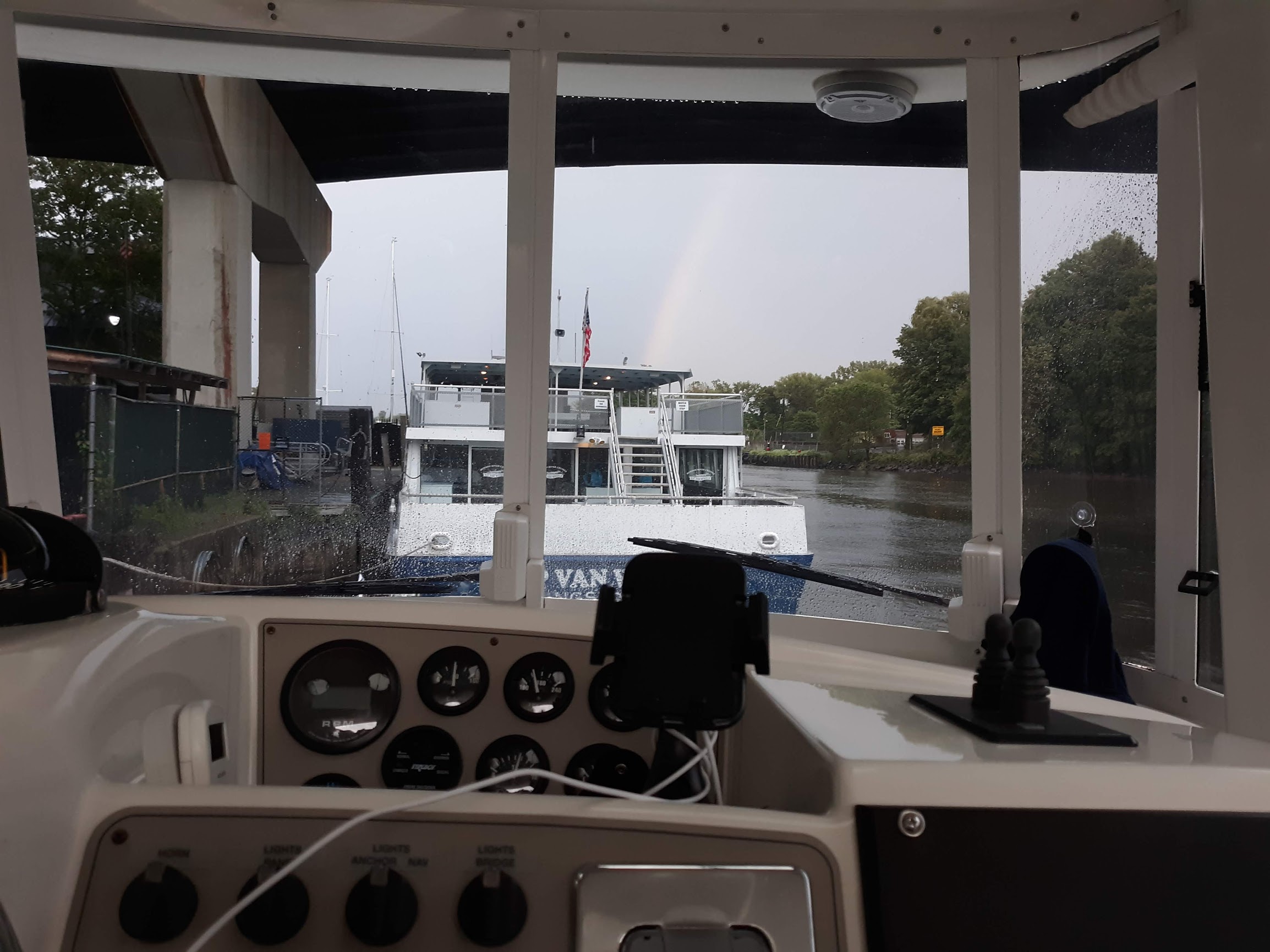 We woke up in Kingston to a beautiful, sunny day.

The evening before there were a few showers that produced a rainbow we could see while sitting on the bridge.

We had a rainbow back at Cutter Marina in Essex, Maryland, the night before we started the Great Loop.

Our friends told us that it was good luck and we believed them.

Now here we are seeing a rainbow the night before we leave so we decided this was a promising sign.

Before We Even Start the Engines

He called a family meeting.

We’ve been having “family meetings” over the past 20+ years.

And yes, I know, there is only two of us so we could just talk to each other anytime.

But that’s not how it works at the Crouse House.

Sam starts right away with a trip briefing.

My head starts spinning around like a possessed Linda Blair.

We are finally getting organized!

We are moving from the “newbie” stage into the “let’s at least act like we know what we are doing” stage.

How We Created Our Checklists

To be honest, most of the items on our checklists are there because of our mistakes.

We forgot this, we mistakenly did that, all of those new experiences and sometimes really bad mistakes led to the creation of our checklists.

Maybe there is something to be said for preparation.

You could probably guess that Sam is the planner and I like to fly by the seat of my pants.

But I’m really impressed with the way he is running things.

We decided to go to Albany instead of other popular stops because right now some of the locks are closed, not on our route, but the marinas closest to the locks are packed out with boats waiting for the locks to open.

So we head up the Hudson at a comfortable 10 mph.

There was more traffic.

We had to watch out for tugs and barges and large logs along the way.

The further we went the stronger the wind.

By the time we got to Albany Yacht Club, the wind was up to 17 knots.

But like the pro you know he is, Sam got in there easily.

We stopped to get fuel and pump out first and then we got in our slip.

The only thing I knew about Albany is that it is the capital of New York since I taught 5th grade Social Studies.

We met a gold looper couple and went out to dinner.

They gave us such valuable information not to mention a fender and anchor wash nozzle!

There are several places within walking distance of the marina that you may need like Aldi (grocery store), Rite Aid (pharmacy), a second-hand store (in case you want to donate clothes, kitchen items, etc.), liquor store and a few hair salons (Sam got a hair cut).

We went to a restaurant called Illusive (awesome burgers, steaks, and salads) that was really good.

But there are several others including pizza, Chinese, Subway, a hotdog stand, and Skyline Diner.

I always appreciate marinas that are located close enough to stores and restaurants!