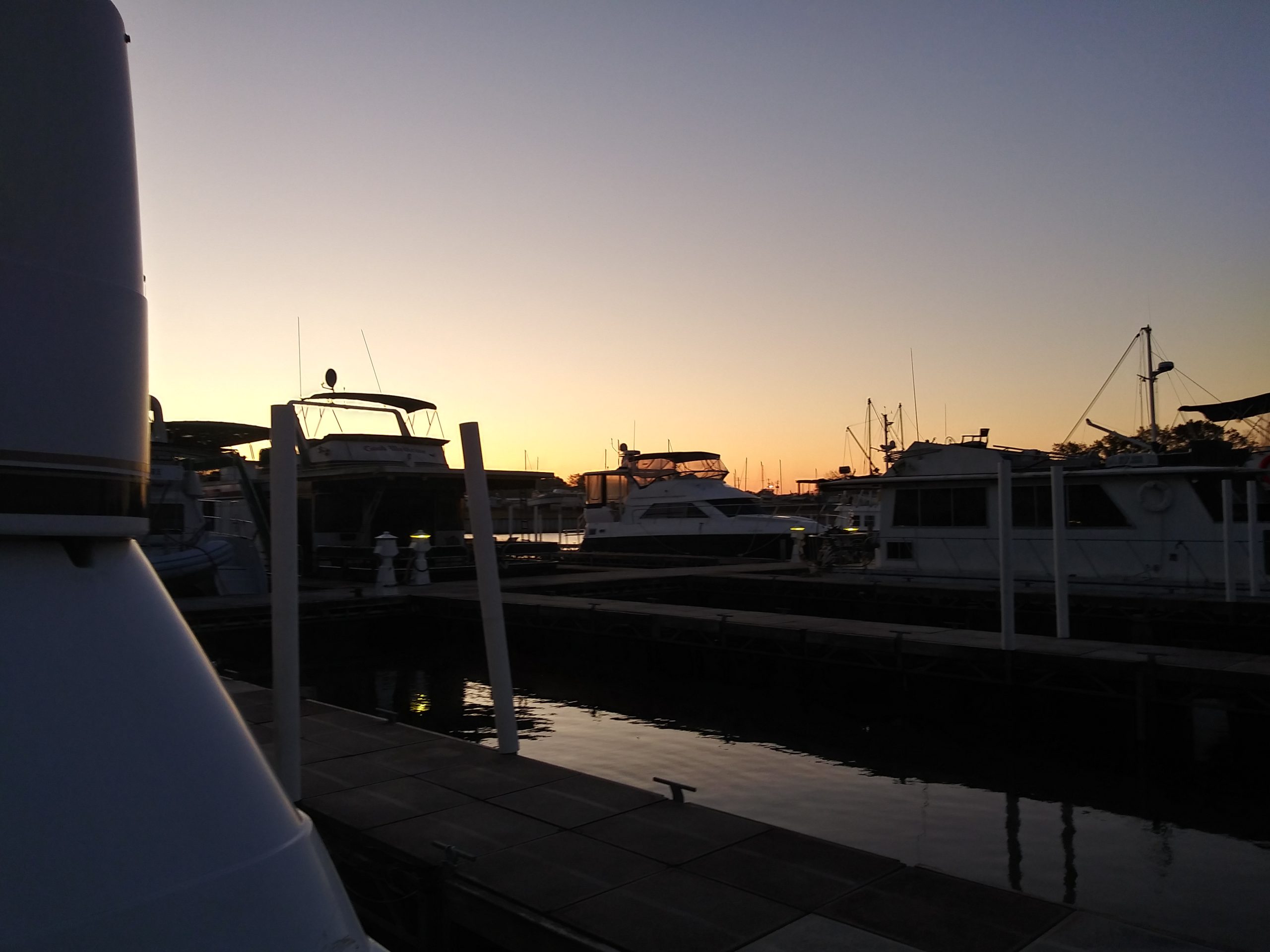 It’s another one of those days.

The captains met the night before and decided to go the 96 miles all the way to Bobby’s Fish Camp instead of anchoring somewhere closer.

I was all for it.

I’m so ready for warmer weather!

But the high is supposed to be near 60 so I am thankful for that.

We pulled out of Kingfisher Bay Marina.

As we were going down the fairway, a boat with “Troll” in the name started backing out.

I was outside and heard her say she didn’t see us.

We were wide awake at this point.

Four of us left the marina around 6:15 a.m. and headed for the Demopolis lock.

The lock was only about 2 miles from the marina.

The Troll was third and Serenity Blue was bringing up the rear.

The lockmaster told us exactly when to be there so we could go right in.

He had rules – life jackets, no wake, etc. – and seemed to be one of the most organized that we have seen.

We all got tied and secured to the floating bollards and were lowered down with ease.

It was, however, freezing.

Thankfully, this is our only lock today.

While we were in the lock, it was decided that we would exit the way we had entered and then work out the order of the fleet.

There was a tow barge waiting to enter the lock on the other side.

That plan seemed to be the safest.

However, the Troll wasn’t on the radio when that was decided.

But Seasons knew they wanted to go a lot faster than the rest of us.

After we all got past the tow, Sam started his pass around the lead boat, Seasons.

Serenity Blue was behind us.

Sam radioed the Troll so we could get organized.

The Troll was already passing us at about 15-20 mph.

As he passed, we caught his wake and our boat started twisting and turning from side to side.

It knocked us right off of auto pilot.

He really was a Troll.

So much for having a plan.

Sam, however, could not resist and picked up the radio and thanked him for the slow pass.

We are hoping that we got all of the excitement out of the way on this very long day of travel.

Cruising Down the Tombigbee River

What a beautiful day to be on the Tombigbee!

We are still seeing some industrial sights along the way.

There were trees, cliffs, beaches and homes.

And of course, my favorite.

As we maneuvered around the Tombigbee, the map looked a lot like those winding road signs.

I went up to the bridge to sit with Sam for a while.

All of sudden, I see it.

Sure enough, as the boat was autopiloting itself around those curves, it changed our view of N-S-E-W.

Our little boat icon was upside down now on the Garmin chart plotter and there WAS a barge coming our way.

When will the excitement end?

Sam made the call and we passed with no incident but it showed us that we have to be on our toes on the Tombigbee.

Gotta watch out for that.

We also started seeing shore that looked more like a beach than a river.

This sailboat seems to be in the wrong place.

And this group enjoying the beach on the river.

We contacted Adagio, a powerboat, who had just arrived at Bobby’s Fish Camp.

There were already four boats on the dock.

And the Troll was in front of us.

We didn’t know their plans, but Bobby’s is a very popular place to stay.

They have a wall with power and they make boats raft up so everyone can stay.

About an hour before we reached Bobby’s, we got the word that Adagio had worked everything out for us and there would indeed be a place for our three boats.

We are going to make the best of it.

We came in with ease, rafted the two other boats up and hooked up to power.

Then we met Seasons, Adagio, Serenity Blue, and Grace for dinner at Bobby’s Fish Camp.

I recommend the Seafood Platter so you can taste everything they have to offer.

It will be a short night again.

We’ve got 66 miles to go to our next anchorage.