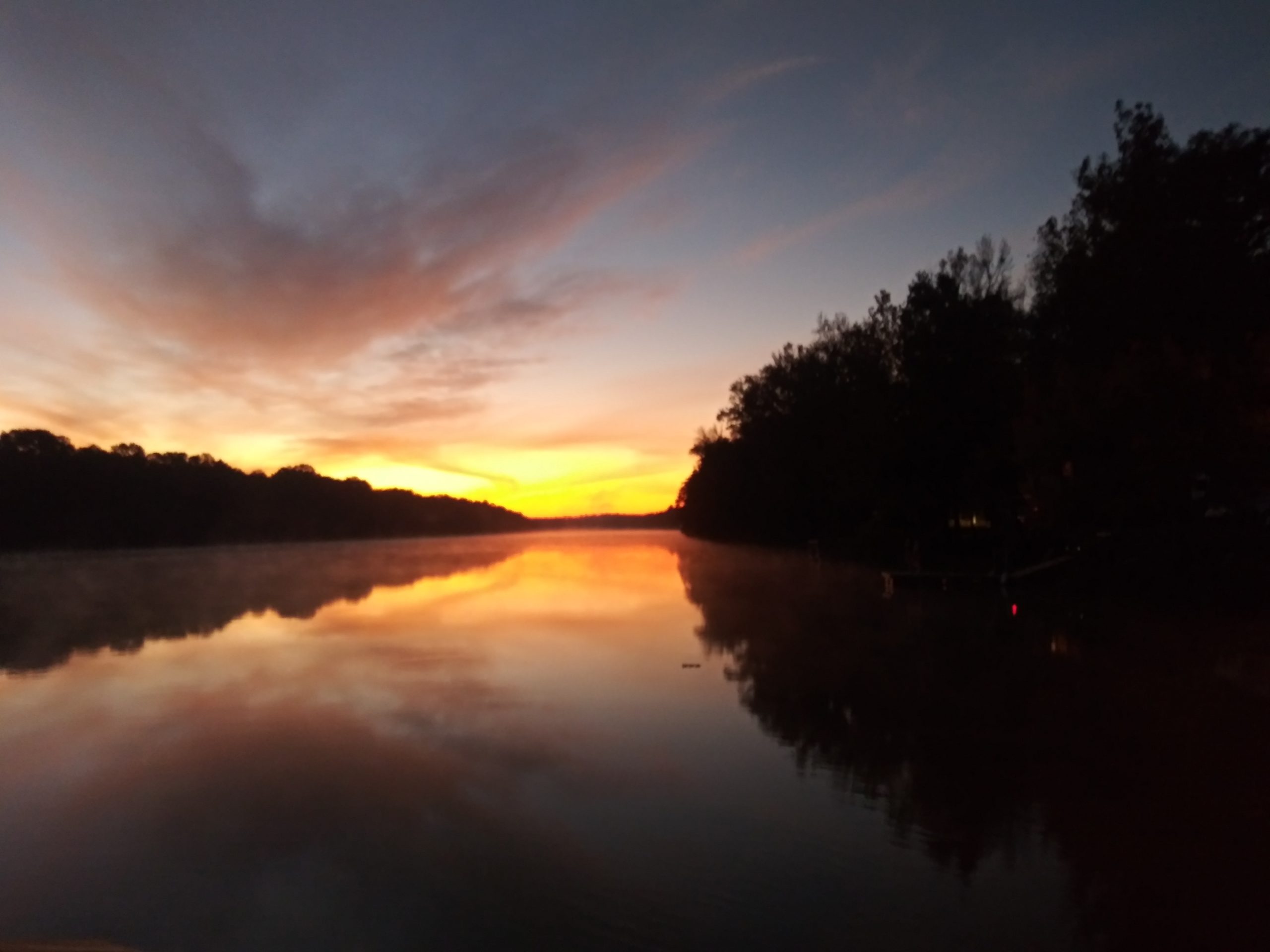 We left Bobby’s Fish Camp bright and early around 6 a.m.

It was really cold.

I had on two jackets.

We were rewarded though with a beautiful sunrise.

As I walked around the front of the boat, I slipped and fell hard on my bee-hind.

We really need to get to Florida!

I hurt my toe, my wrist and of course, my bee-hind!

We were in the back of the wall so we were going to be one of the first boats out.

We did have to wait while a couple of fishing boats got loaded up and away from the dock.

The sky was spectacular, and steam was rising from the Tombigbee river.

Cool and spooky at the same time.

The Troll called us on the radio and passed us with little wake.

It’s almost as if his mom had given him a stern talk about how to treat other boaters.

Whatever happened, we are just thankful that he wasn’t trouble today.

About two miles down the river, we came to the Coffeeville Lock.

The past few locks, the lock master asks for the boat names and registration number.

After all that was done, seven boats got tied up and secured using the floating bollards.

We went down about 30 feet.

The front doors opened about 3 feet.

Then, they shut again.

A few minutes later, the lock master announced that there was a shift change.

We waited in the lock for about 40 minutes for that shift to change.

I got some coffee.

Watched the highlights from the OU-Baylor game.

Traveling Down the Tombigbee

As we continue traveling down the Tombigbee River, we enjoyed seeing the sights along the way.

Of course, you know I love the bridges.

And just going along and seeing the trees on the shore is enough entertainment for me.

We did pass our friends that are on Grace, a lovely sailboat.

But, oh, those bridges!

I think I love them so much because I have only known the perspective of traveling across the bridge.

Never from down below.

It’s just so impressive to me.

Different modes of transportation, all using and appreciating the incredible form and function of a simple bridge.

And of course, we appreciate all the industrial sites to see along the Tombigbee.

Check out this railroad bridge.

I wonder about all the people that have had the privilege of going up into that little house up there.

What a view that must be!

And I wonder what goes on in a facility like this.

What could be going on in there?

And this has something to do with energy but what are those giant, round structures for?

We saw several barges along the way along the river and our most pressing question is always – “I wonder what’s inside those barges???

We also saw a claw grabbing scrap metal out of a barge and putting it in another container.

What a fun job that would be!

Along the way, we saw incredible cliffs and landforms.

It was really a treat to see the different ways the shore is on the river.

Then, for several miles we saw evidence of severe flooding along the river.

The trees have really suffered being so close to the area that has been washed away.

I’m sure several of them have ended up floating down the river.

One of our favorite sites to see though, is when the river just seems to lay down.

Anchoring in the Tensas River

Well, you know us and anchoring.

We decided to anchor in a spot on the Tensas River that we heard about and decided to give it a go.

We talked to other loopers who had fantastic experiences there just a couple days ahead of us.

So we acted like we were good at anchoring and dropped our anchor.

It set the first time.

The slight current and no wind kept us in the same position all night.

We had heard of alligator sightings in the area and kept a sharp eye out.

However, we didn’t see one.

But we did have an entire evening of this serenity.

And it just got better.

We couldn’t have asked for a better anchorage.