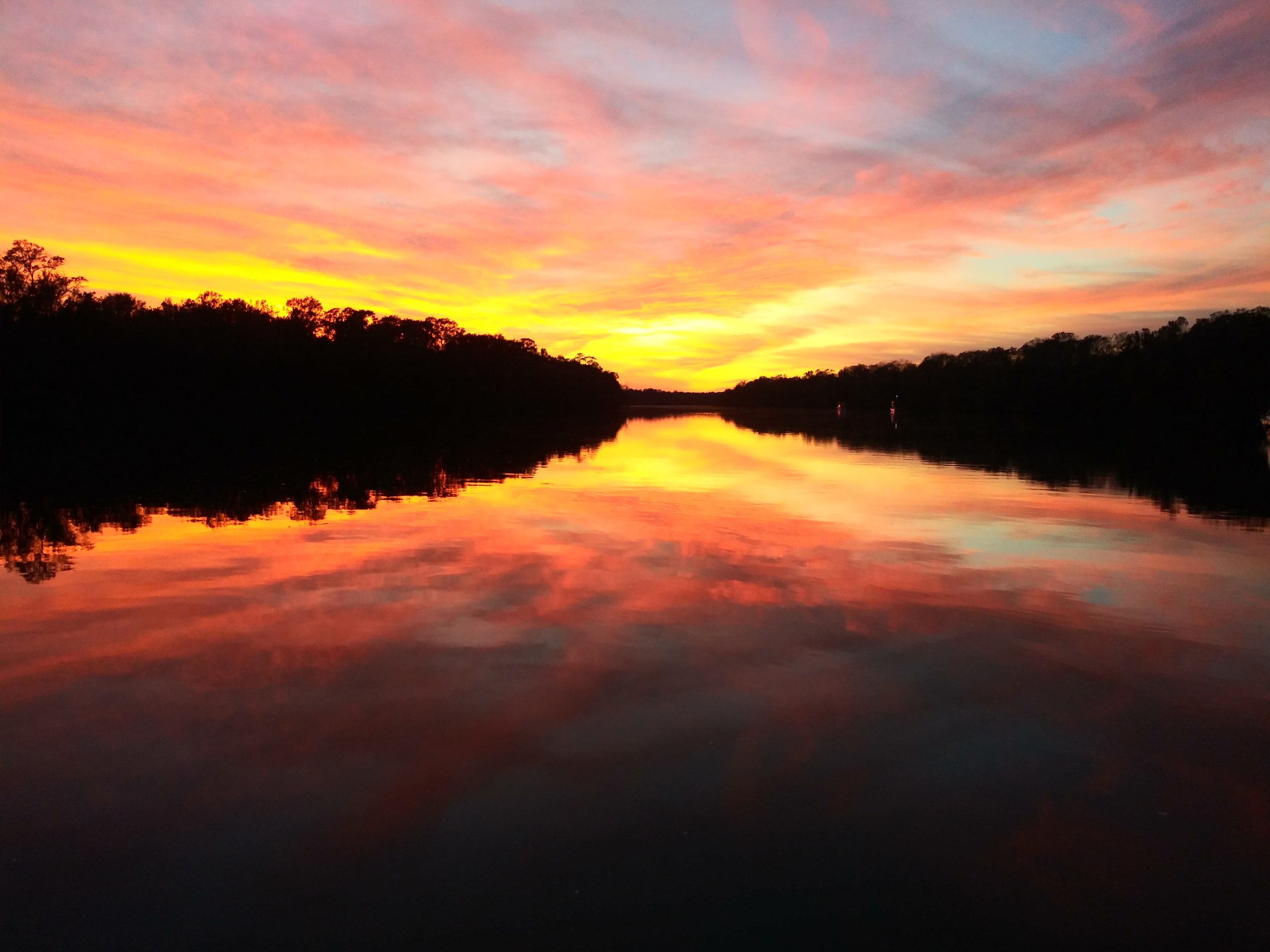 All good things must come to an end.

After seeing the most beautiful sunset I have ever seen in my life, our perfect anchorage ended like this.

It took a bit of ramming that thing with the boat pole and Sam started the engines and proceeded to twist the boat from side to side until we were released.

That tree finally went on its way.

And so did we.

Heading Down the River

I know what you are going to say.

Every blog post that I have written since we left Chicago talks about seeing barges, bridges, and industrial sites.

But you know it’s all coming to an end.

One more trip to go until we are out of the rivers.

So let’s enjoy it one last time.

We could see those red and white striped smoke stacks coming.

I just love the way they look against the blue sky.

Straight out of a Dr. Seuss book and into real life.

And yes, of course there were bridges.

I like the way they look when we are coming toward them.

And then going under them.

And of course, looking back from the other side.

I never would have guessed when we first started the Great Loop that there would be so many different styles of bridges.

And what would this last trip down the river be without seeing barges?

The river is where they live and work and thrive.

The river is their home.

We are just passing through.

Don’t make me choose which ones I like the best.

I am impressed with the way this was designed.

How the center section lifts for boat traffic.

I especially want to know what happens in that little house and how to get up there.

After being in the heart of the river system for such a long time, once we came to this stunning bridge, we could see Mobile, Alabama in the distance.

Not only was our cell service returning to a consistent level, we got to see the sights of going down the Mobile Bay Ship Channel.

What a spectacular sight going underneath this bridge.

So there we were.

We saw quite a few tow boats roaming around.

This is the Mobile Convention Center where loopers can tie up for free and spend the night.

It is a wall without power.

It’s a trade off.

With all the traffic going by, I was happy to move along.

There were also some Navy ships in the area.

And freighters and barges and more.

It was quite a thoroughfare.

It was an honor to run out there with the professionals.

Out in Mobile Bay

After we made our way out of the Ship Channel, we started to see a different scene.

And no, I don’t have a picture.

It was quite a surprise.

I didn’t know they were going to be here.

I thought they lived in Florida.

The pelicans were much easier to capture.

Sitting there and demanding that I take their picture.

Then, I saw the most incredible boat.

I found out from Sam that this is a shrimp boat.

Has arms sticking out on both sides.

Birds are attracted to it and dolphins swim behind it.

Now that we are out of the locks, we have to be concerned about tides.

If it’s not one thing, it’s another.

We turned to go into the channel heading to Dog River Marina and found out that not only is the channel very narrow but the tide is low.

There was only about 3 feet of water under our keel.

What’s strange about it is that you look around and see water everywhere.

And to know that we are in the deepest part of it and our boat only has 3 feet of water under it is a little frightening.

So in the middle of the channel we stay.

But Sam naturally handled it like a champ and got us in safely.

We did have to wait awhile as others in front of us got fuel.

Sam tried to teach me a few boating maneuvers but alas, I’m not that comfortable sitting up there in the captain’s seat.

We finally were able to go over and get fuel ourselves before being directed to our space.

Well, I’m going to let the cat out of the bag.

Mobile, Alabama is a fantastic city and you should visit.

I don’t know why I didn’t know this before.

We took a fantastic tour of the city.

We had palm tree sightings which surly meant warm weather.

We were invited to tour Mobile with our friends from Saltaire, who we had traveled with previously.

So off we went in their rental car.

We started at the Battleship Memorial Park where we toured the USS Alabama, an Aviation Museum and the USS Drum submarine.

That ship was an impressive sight!

Quite a propeller, huh?

First, we went inside the Aviation Museum.

Every exhibit had some tie to Alabama.

On our walk over from the museum to the submarine, we saw this swift boat.

We began our tour of the submarine.

It was so very interesting to see how the crew lived in the tiny spaces.

They didn’t have a lot of room to sleep or eat or move around.

It was awkward walking through the tiny opening moving from one small enclosed space to another.

The best part of the tour was visiting with a real life veteran who served many tours on a submarine just like this one.

It was humbling spending time with him.

Out on the grounds, Sam spotted a B-52 like one he used to fly in the Air Force.

Then, we finally got to tour the USS Alabama.

Look at the size of the chains.

So thankful that my first mate duties are much easier!

After lunch, we went on a tour of Mobile aboard a trolley.

We went all over town and heard stories about homes, businesses, Mardi Gras and more.

We even did a drive-by back at the Battleship Memorial Park.

After the tour, we spent some time enjoying downtown Mobile.

It’s got to be the best kept secret of the south.

I already want to go back.