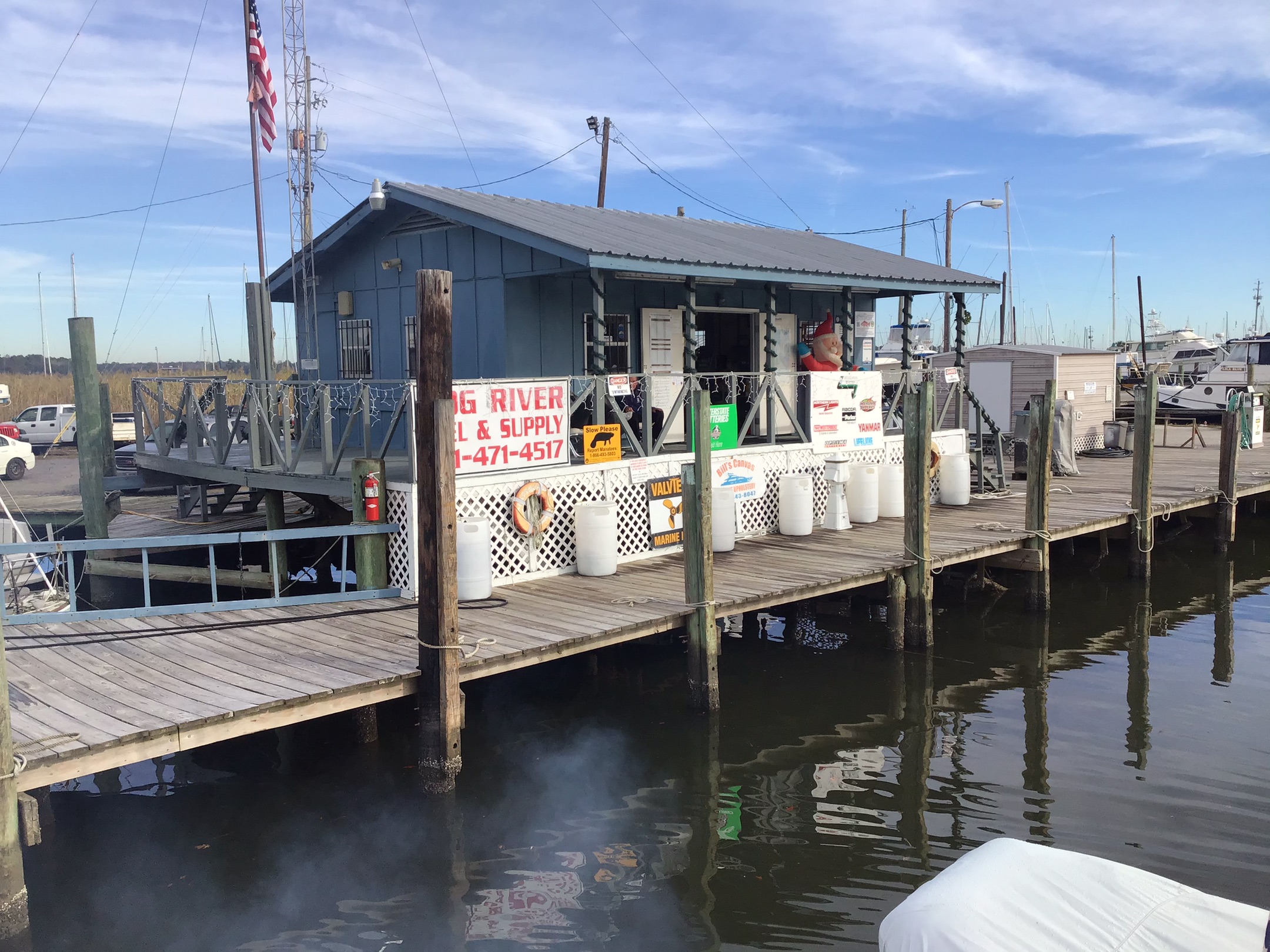 We left the Here’s To Us!! docked at Dog River Marina in Mobile, Alabama as we flew home to DFW to enjoy our family, friends, and Thanksgiving.

We had some maintenance items accomplished while we were away.

Now, we are ready to get back to it.

It was a beautiful, calm morning when we left the marina.

We left our space near the fuel dock.

And headed back out.

Right past Turner Marina where a lot of sailboats hang out getting their masts reattached.

And under the bridge.

This is where we found shallow water during the low tide – three feet under our keel – when we were coming in.

We stuck close to the channel on our way out so we could cruise right over the deepest part.

Back Out Into Mobile Bay

Almost immediately after returning to the Mobile Bay, we started seeing giant barges and tow boats.

And of course, the shrimp boats.

When birds got tired of chasing the shrimp boats, they rested on whatever they could find.

Whatever they could find.

It was difficult to catch them above water.

I have so many pictures taken right before or after they surfaced.

I just love seeing them and squeal like a little girl each time.

We spotted another shrimp boat complete with flying and swimming birds hoping to catch a morsel.

Even though there is water all around, you can’t tell by looking out the window of the boat just how deep the water is.

Sam had to make sure we stuck to the white part of the channel with the deepest water.

We also saw two barges passing each other in this skinny part like they are going down a highway.

And Sam once again had to call out to them for passing instructions.

I guess they don’t hear from many boats in this part because one captain remarked that he was impressed that Sam knew what to do.

This journey was such a peaceful ride.

The water was calm.

The sky a spectacular blue.

All was right with the world as we spotted the cut which directed us to the next part of the Intracoastal Waterway.

This waterway was going to take us right to warmer weather.

There were houses all along the right hand side of the ICW.

Signs of the holiday to come.

We were moving closer and closer to the bridge where our destination rests right on the other side.

We decided to stay at Homeport Marina where Lulu’s Restaurant is located.

Talk about a party place.

Of course, it’s in the off season, but we still had a great time.

Lulu is Jimmy Buffet’s sister and she sure created a beach-y paradise right here in Gulf Shores, Alabama.

The Harbor Host, Robbins Flynn, met us there to answer our many questions.

He was kind and gracious and gave us a lot of good information so we could confidently continue on our way.

He also works for Curtis Stokes, who we met at the Spring 2019 Rendezvous.

They are a fantastic sponsor of America’s Great Loop Cruisers’ Association.

We had a great stay at Lulu’s and the Homeport Marina but we gotta be moving on.

Still trying to get to warmer weather!