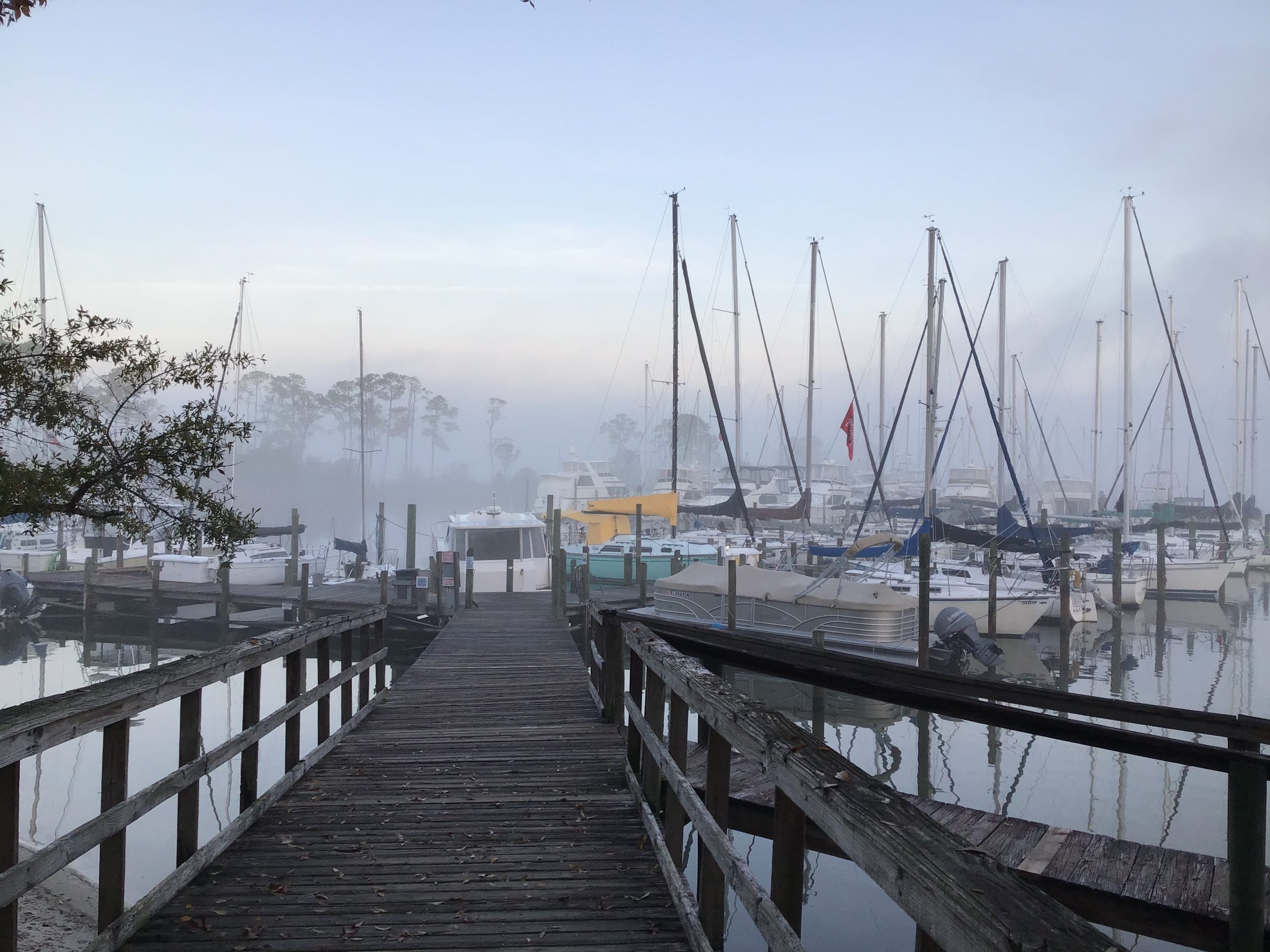 We woke up early while staying at the Bluewater Marina to a very foggy day.

Since we don’t travel in fog, we were just going to have to wait it out.

It’s the kind of morning that makes you slow down.

We decided to leave when most of the fog had lifted.

We had to travel 65 miles today and we were anxious to get started.

We certainly did not follow our breadcrumbs out of this place since Sam got distracted coming in and almost got us into trouble.

So we left a sleeping marina and headed out.

Before we knew it we were right back in the Unexploded Bombs area.

Can’t tell by looking at it, can you?

We made it to the Mid-Bay Bridge.

Another great day to be out on the water.

We passed a tow boat while out there.

Then, we came to the Prohibited Area where Eglin Air Force Base conducts system testing.

First the fog slowed us down, then the sky started turning dark and cloudy.

We didn’t really see any trouble on the radar so what was this?

The scary clouds seem to disappear and we didn’t get one drop of rain.

While we were rolling along, we heard a Securite call on the radio.

Sam listened to the coordinates and said that it must be right around here.

Off in the distance, I spotted the white bottom of a capsized boat.

I do hope there isn’t a tragic story that goes along with that.

Traveling on the Intracoastal Waterway is sometimes a very narrow body of water and sometimes it seems mammoth.

We did get to go under another bridge.

On our way to the Grand Canyon cut.

I had no idea that there was any other place on earth called the Grand Canyon other than the big one in Arizona.

But we were getting ready to go into the Grand Canyon cut right in the panhandle of Florida.

They said to keep an eye out for bald eagles but we only saw a few hawks.

Maybe if our eyesight was better we could have seen some eagles.

The Grand Canyon cut was a 20-mile strip of the ICW.

And we went on a great day.

I even saw a dolphin when I was on the bridge giving Sam a break.

There were a couple of barges in the area waiting for a tow.

We saw a couple of kayakers.

And a fisherman working two poles.

Then, we saw why they call this the Grand Canyon.

In some parts, it was so still the water reflected everything on it’s shores.

Then, we saw a sailboat and passed it gingerly.

Finally, we could see the West Bay Bridge that meant the end of the cut.

After we got past the bridge, we saw this interesting piece of machinery out there.

We had a few more dolphin sightings and saw more pelicans.

Then, we made our way to the Hathaway Bridge.

Busy on the Water

After the bridge, we saw some interesting ships.

And then a fleet of Navy various sized ships.

We also saw the Starfleet Patriot.

We finally made our way to Panama City and found the Lighthouse Marina.

This was a great stop.

We were able to meet some of our friends in the area.

We even enjoyed the Pirate Parking spot they assigned to us.

There is a fantastic restaurant right there on the premises.

We stayed a couple of days and were able to walk to another great restaurant.

What Do I Need to Start a Great Loop YouTube Channel?

The reason that our tag line for What Yacht To Do is "Learning As We Go" is because we knew very little about cruising...