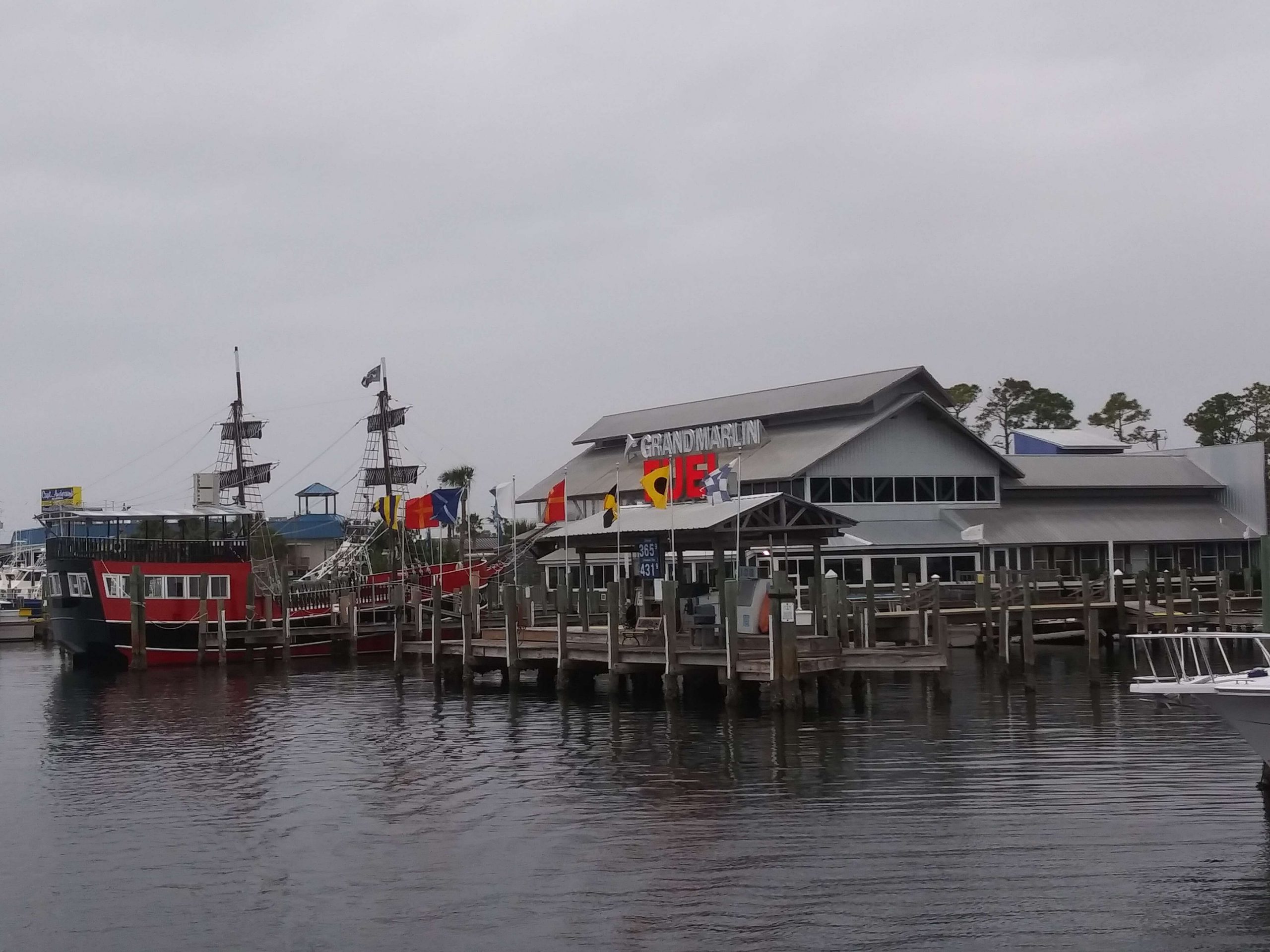 The morning we left Panama City, Florida it was cold, rainy and windy.

Not a real good combination for boating.

But we moved on anyway.

After we pulled out of the Lighthouse Marina and into the Grand Lagoon, we saw several boats anchored on the right hand side.

Then, we saw something that we hadn’t seen since Michigan.

A kite surfer out there in the crazy weather.

Can you believe that?

The passageway between the lagoon and the channel was very narrow to say the least.

We had to pass between a marker and the beach.

That’s a pretty skinny (as Sam would say) area.

We continued to see a narrow channel and the waves started getting choppy.

But our boat can handle it.

It’s me that has trouble.

When we left the rivers and Mobile Bay, I thought we left a lot of the industrial plants behind but no.

There was another stinky plant going full force with whatever they were doing.

Sam is smiling but he’s really holding his breath because that plant really does smell.

Then we came to the DuPont Bridge.

Sam decided to let the autopilot take us through it.

Our video below includes the footage of Sam telling you why.

As we are going under the bridge, we hear it.

The sound of freedom.

There were several jets that we were able to see today.

Something you never get tired of.

Sam saw on the AIS that there was a dredging operation going on ahead of us.

He tried reaching them on the radio.

Finally, we heard them call out the pleasure boat approaching them and the conversation began.

There was very little space to pass them on the right side where they told us to pass them.

They said stick close to the green markers and we will be fine.

Sam slowed down and made his approach.

We were almost right up on them when we saw white poles with tiny orange flags.

As we got closer we saw an entire row of these markers between their machinery and the green markers.

Our passing lane just got a lot smaller.

Sam immediately had to change our course and move to the other side of the white poles.

It would have been nice if the captain had mentioned those but of course, Sam handled it beautifully.

You’ll want to check that part out in the video.

I recorded the whole thing.

After we calmed ourselves down from the unexpected dredge incident, we continued to follow the narrow channel markers right into a very small area.

It’s always interesting to see the view from the bridge.

As we continue on through…

We started seeing some homes with shiny new roofs and some with blue tarps.

These are some of the effect of Hurricane Michael in October of 2018.

Another tragic reminder of the hurricane.

Another bridge in the area.

After we went under the bridge we made a left turn and had to make the closest pass we have ever made around this tow boat.

My teeth and my fists were clenched.

We couldn’t get around that thing fast enough for me.

But Sam went slow because he didn’t want to wake them.

It felt like we were cruising in slow motion.

Continuing on we saw trees that had just been snapped in two.

Many trees were just lying down.

That hurricane really devastated this area.

It almost feels like we are back on the rivers.

We saw quite a few more barges.

And one named Miss Ruth was in a big hurry and gave us a pretty good wake.

There was definitely something going on here.

They were working frantically.

When we came to the White City Bridge our phones flipped over to Eastern time.

We have been in Central time since we got to Hammond, Indiana.

That’s our usual time zone being from Texas so we felt comfortable with it.

But once we passed under that bridge, our clocks took us ahead one hour.

And then for the next few miles, they would flip back to Central and then back to Eastern and this dance kept on going for awhile.

The homes we passed next were large and looked like lodges.

You know I’m a big fan of bridges.

On our way to Apalachicola, we came to a swing bridge that was open.

I found out later that this bridge remains open unless there is railroad traffic coming from either direction.

I’m glad there was no railroad traffic today.

The marina where we had reservations called us while we were underway to inform us that the boat in the slip we were assigned wasn’t leaving.

So Sam spent a considerable amount of time trying to find another place.

He finally found a wall with power but no restrooms or showers.

We spotted the wall when we were still in the channel.

We also saw some very cute, very colorful homes that we later found out are Airbnb/VBRO rentals.

After we made the turn, we saw more hurricane devastation.

We were traveling with Archimedes and they also had booking issues so they rafted alongside us on the wall.

We are docked right on the other side of this.

And this is across the street.

We were excited to go here because out front it said “live music” every night.

They were going to have a game night and try something new.

This store was next door.

Quite the combination don’t you think?

And what would a waterfront town be without a nautical Christmas tree?

The palm tree is to remind you where you are.

As we took a stroll to see what we could see, we knew we were going to like Apalachicola.

We met a group from the Chamber who were setting up a wine and food party out front of Betsy’s Sunflower Kitchen Store and More.

Since the party was right across from where our boat was docked we told them we would be back.

On our stroll, we saw places that were closed that we really wished were open.

We ended up at Oyster City Brewing company and met our friends and raft up mates from Archimedes.

It was a fun little local brewery that welcomed us.

The people were friendly and laid back.

That’s what beer will do to you.

Now back to that Chamber party…