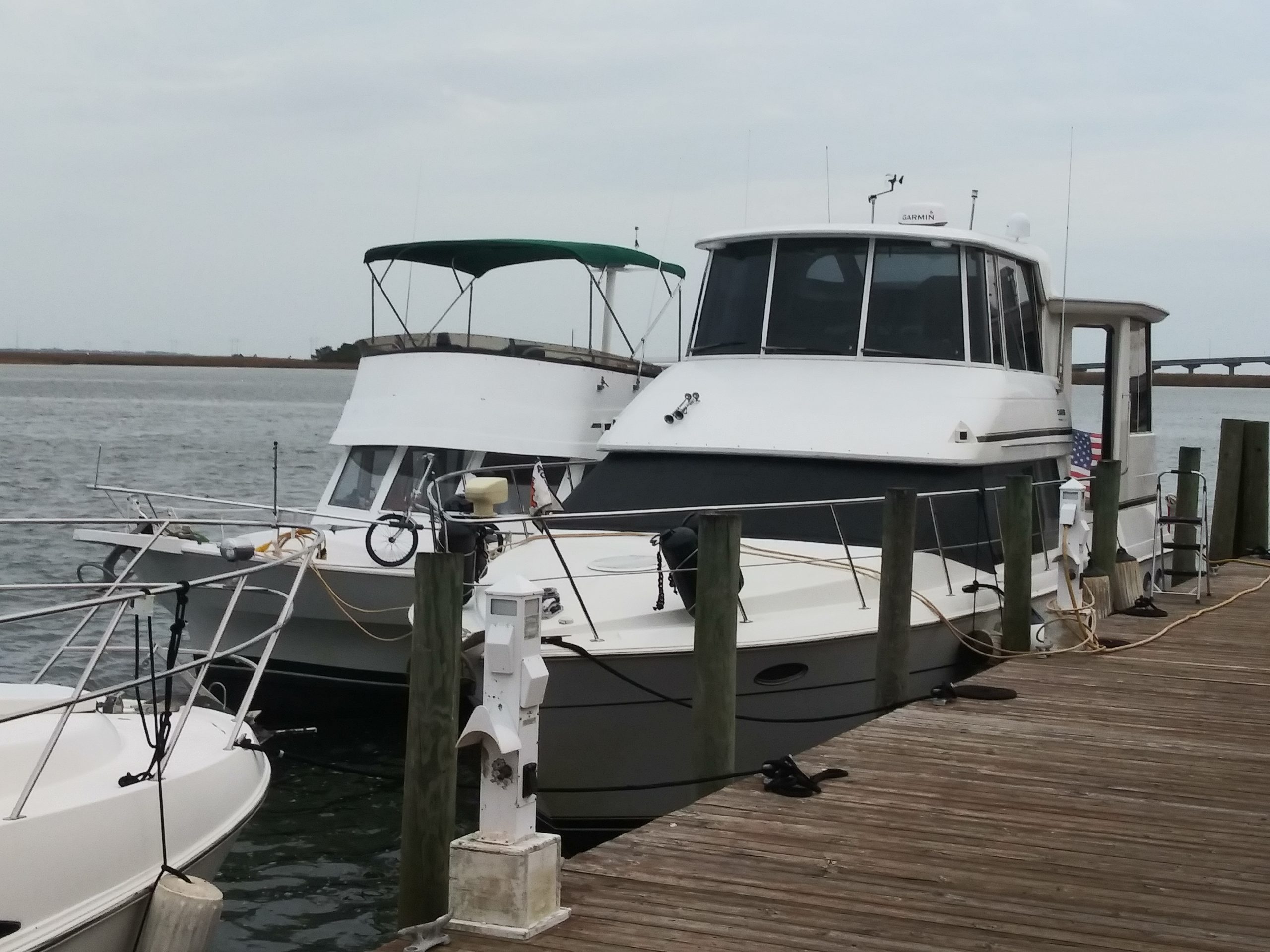 It was a leisurely morning.

We strolled over to a coffee shop and met up with the crew of the Archimedes who had rafted up with us on the wall.

At around 9:30 a.m., we helped Archimedes shove off and we were right behind.

After passing under the Bryant Grady Patton Bridge, we left Apalachicola in our rear view mirror.

We left the wall in Apalachicola with low visibility and a cloudy sky.

Then the rain started and made it even more dreary.

We move because of “The Crossing” (cue scary music).

We are planning to cross the Gulf of Mexico from Carrabelle and end up in Tarpon Springs which is 175 miles away.

The crossing requires cooperation from the weather, the winds, the waves, not to mention our nerves and possible buddy boats.

But continuing on our journey to Carrabelle, we cruise on in the rain.

We could see the St. George bridge up ahead.

Sam left the boat on Auto Pilot and it took us perfectly under the bridge.

Although, I did have to question if we were going to go crashing into one of the concrete supports.

I still continue to be amazed at how Intracoastal Waterway is so narrow in some places.

When we started down the channel heading to Carrabelle, we started to see some dolphins in the water.

This is what most of my pictures look like when I’m trying to catch them swimming or jumping.

The Wake Felt Around the World

Carrabelle is a small, quaint town built for boating.

We saw condos, homes, boat docks and marinas all down the channel.

It was really exciting and fun to look at until I realized Sam was going too fast.

I yelled at him to SLOW DOWN as any supportive first mate would do.

It was too late.

He started waking all the boats docked along the water.

People were on their boats waving their arms.

The marina got on the radio and shamed us.

But another lesson for us and you of what NOT to do.

The Moorings at Carabelle

We waited on Archimedes to fuel up and then we filled up all four of our tanks with diesel before getting into our slip.

We wanted to be heavy before going out tomorrow on “The Crossing” (imagine more scary music here).

The pictures of the marina show you just how beautiful the next day was.

This is why we traveled on a dreary, windy rainy day.

There were several looper boats at this marina and another marina we passsed, so we all got together a couple of times for docktails and planning.

We decided based on the weather.

One thing was clear; there was a lot of information sharing at the meeting and a lively debate on which out of nine different weather apps was right!

So we all left with a plan we were comfortable with, although, few were the same.

The Moorings at Carrabelle was a nice marina to be at even though our boat was docked as far away as you can get from this building where the showers, restrooms and the meetings were held.

They also had a free breakfast.

We only stayed for one night so we decided to venture out for dinner.

We heard that the Fisherman’s Wife restaurant was right across the street from the marina and that it was really good.

We, however, decided to take the other recommendation and walk to Fathoms.

It was definitely a longer walk but they were having live music and we like that.

Walking back from our dinner out, we walked past this marina.

I just had to laugh.

Well, the end of the day in Carrabelle came with a little bit of nerves and heightened anxiety because tomorrow is the big day.