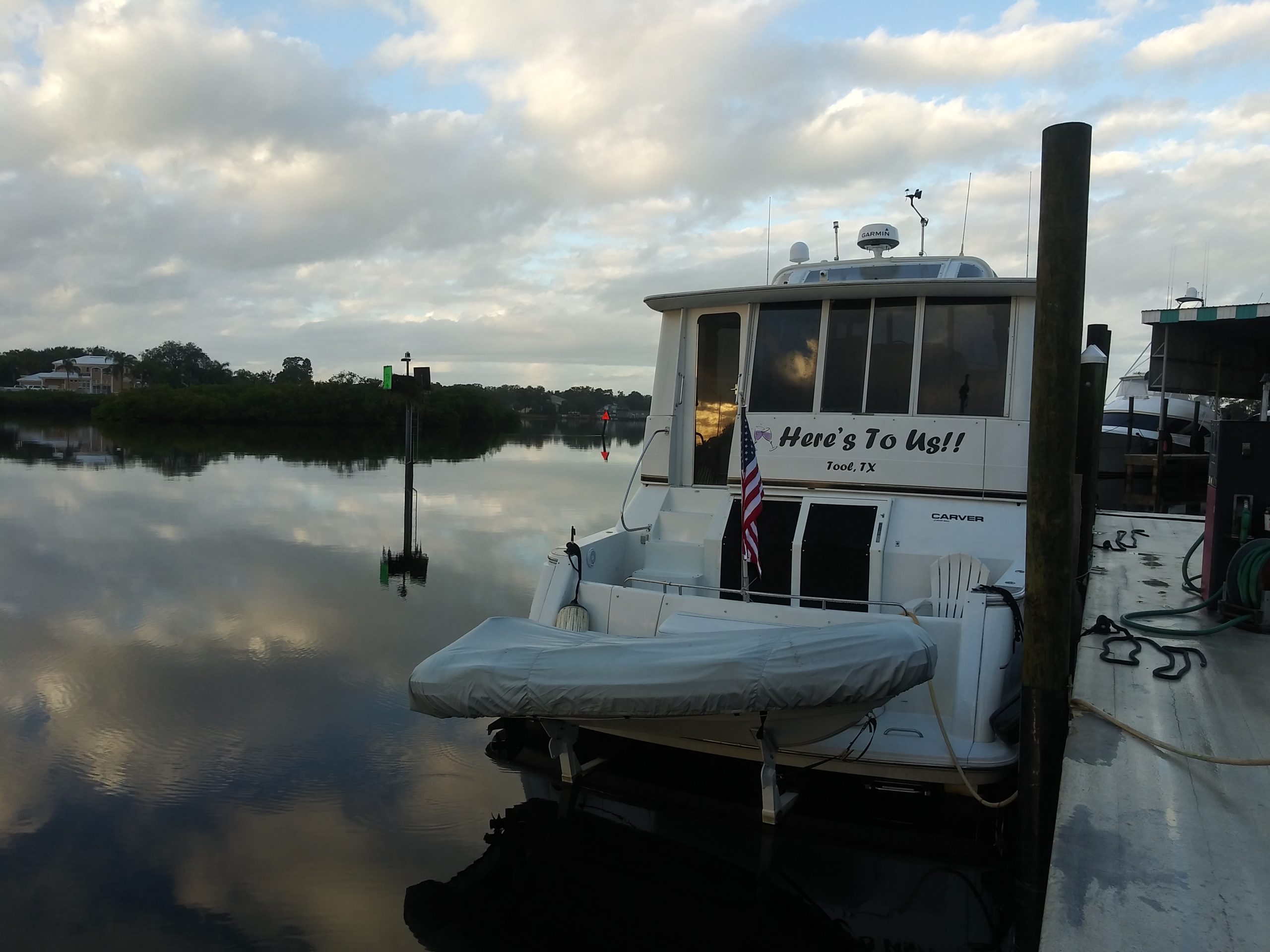 After being in Tarpon Springs for several days, it was finally time to be moving on.

We woke up to a beautiful sunrise.

Port Tarpon Marina gave us a fantastic weekly rate so we stuck around for seven nights.

The weather made us tack on an extra day.

But we didn’t mind.

The restaurant right at the marina, Davidson’s Dockside, was our favorite hangout for the week.

The morning we chose to leave could not have been more beautiful.

This was going to be our first Christmas on a boat.

Certainly our first Christmas not pulling all the decorations out of the attic and decorating a tree and sprinkling a little Christmas cheer in every room.

No, life is much simpler on the boat.

It’s especially simple when you wait until the last minute and almost all the decorations in stores are gone.

We went to Walmart and the Dollar Tree and spent about $4.

It’s just festive enough to feel like Christmas but easy enough to take down in about 3 minutes.

Even though we got a few sprinkles before we left, it was still a beautiful morning.

We left not really knowing where we were going to be anchoring for the evening.

There were plenty of anchorages to choose from so we were going to wait and see how the weather was going to cooperate with us before making a decision.

Would we have to drop the anchor early or could we move further down the road?

We would have to wait and see.

Yes, it was partly cloudy but we knew we would have to keep an eye on the weather to determine our destination.

Come on, be nice.

We haven’t gotten very far at all.

Over on the right hand side of the boat was an inlet to the Gulf of Mexico.

We had considered going out there and running high to make progress faster.

But after we saw the rolling waves, we decided to stay in the Intracoastal Waterway.

We saw a few tiny little islands on along the way.

The Garmin plotter identified them as a “Spoil” area.

If you know anything about what that means, we would love to hear it.

Apparently, sailboats love to anchor near them.

We certainly did have a lot of bridges to contend with on this trip.

We had to know exactly how high our boat is because of the tides and the changes of the clearance under each bridge.

Even though there was a lot of water all around, the channel was very narrow.

For the deepest water, we stayed right between the markers.

There was considerable traffic out due to the holiday season.

When kids are out of school and parents are on vacation, the water is the place to be.

There seemed to be a lot of anchorages around but as long as the weather was good, we kept on going.

But seeing it from the water was an awesome view.

The birds seem to like this area as well.

We would have liked staying at the marina there.

Some of the homes along the ICW are quite something.

I do love the kind of bridge that has plenty of clearance to get under.

How convenient is that?

Not only is the channel narrow here but the shore certainly is closer.

We heard on the radio, a gentleman with a heavy French accent call to have the bridge opened.

He was traveling in a sailboat named, Sasi (sassy).

We followed right behind him and even though we didn’t need to have the bridge open it was nice to have a lot of clearance.

Sam passed them after we went under the bridge.

We enjoyed traveling along this narrow channel.

There certainly was a lot to see.

Are you seeing a pattern here?

I don’t think that there was actually one bridge that we needed to have opened.

I can’t imagine traveling today in a sailboat and having to have most of the bridges opened.

But back to the weather…

I love seeing dolphins and if you don’t have a boat to get out here to see them yourself, taking a dolphin cruise would definitely be the way to go.

However, we almost got into trouble because the captain of one of those tourist boats wasn’t watching the other boats around.

It was a large sailboat and many passengers all around it.

And even though a sailboat with it’s sails up has priority, the captain was not making his intentions known.

He was swerving and circling and driving dangerously.

Sam had to lay on the horn to alert him.

It was an unnecessary close call.

What is Our Problem with Anchoring?

We had been pushing as long as we could to stay ahead of the weather but now it was time to set.

We found a place by Maximo Park in St. Petersburg, Florida.

It was a long-term anchorage meaning that you can leave your boat there.

We proceeded to do our anchoring routine.

I was out on the bow in my rain gear.

The sky was getting darker by the minute.

As I pressed the downward foot pedal of the windlass, the chain started going down.

I took my foot off the pedal and it continued going down.

The wind was about 20 knots and fighting us..

I could see the band of rain coming our way and it was only a matter of time before I was out there getting drenched.

Anchoring in the pouring rain.

I would rather be anywhere else right now.

But we finally got it set and I was able to go in out of the rain.

I didn’t like our position, I thought we were too close to a sailboat, but we were just going to have to wait out this little storm.

After it had passed, I went back out and we reset the anchor a little further way.

Then we were rewarded with this.

After the drama of the anchoring, we enjoyed the show that the sky gave us.

It ended up being a really nice anchorage and I enjoyed it very much.

Sam, however, did not sleep well.

Check out this picture of the Garmin chart plotter as we were leaving the anchorage.

Maybe someday we’ll get used to this anchoring thing.

Until then, we’ll just have to keep practicing.