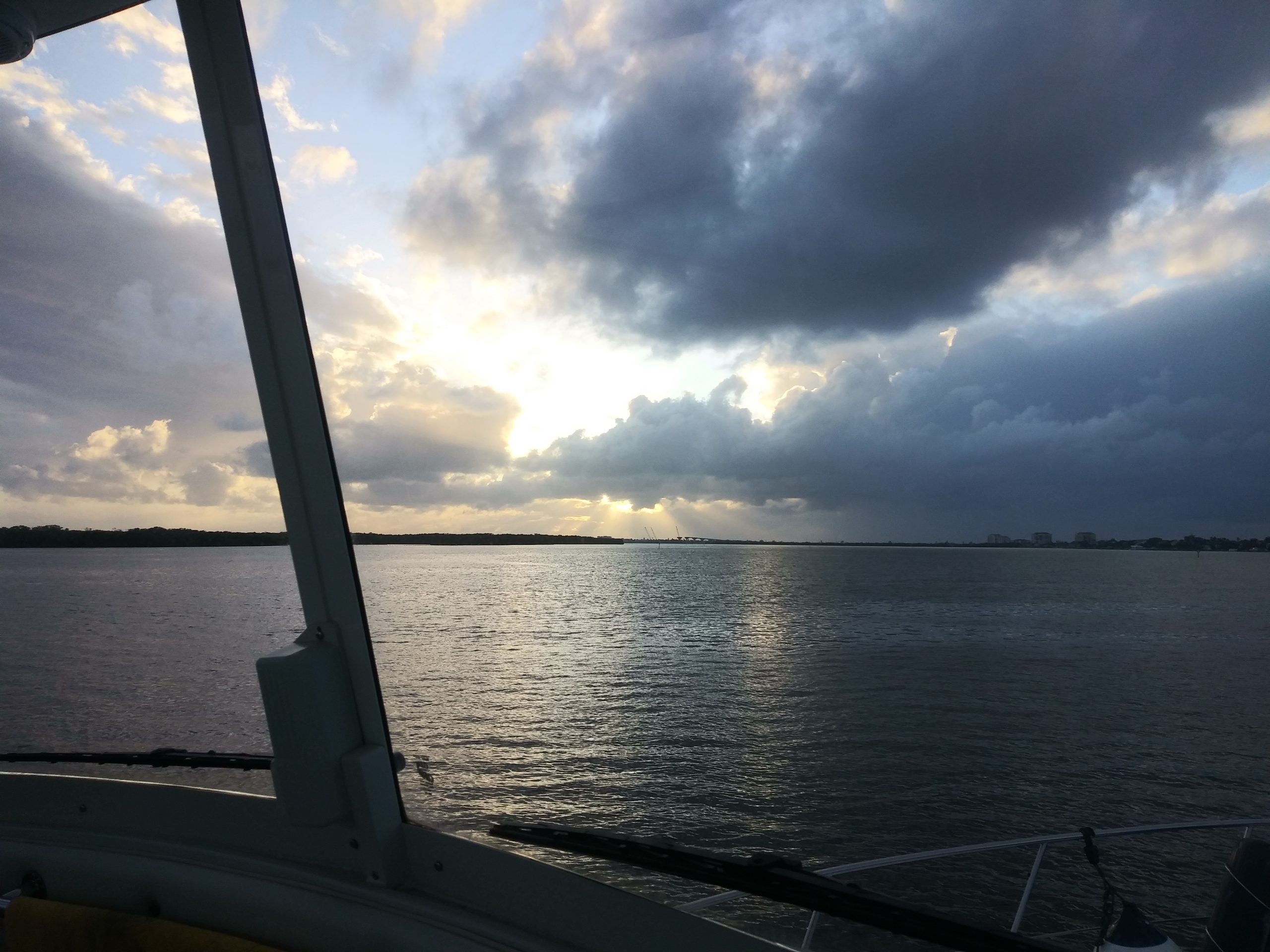 Our anchorage at Maximo Park by St. Petersburg, Florida was another attempt to pretend like we know how and enjoy anchoring.

Although, I slept great, Sam struggles to relax when we are on the hook.

We did wake up to a beautiful morning.

And when we left, we were pretty sure we were the only living humans out there.

This is a “long-term” anchorage and the rest of the boats out there were empty.

So we said good-bye to empty boats and birds and went on our way.

We did see this sailboat laying on its side.

Even though there is a lot of water around you have to stay in the channel marked by the red and green signs.

Otherwise your boat will be grounded and you won’t be going anywhere.

But it wouldn’t be all bad.

Maybe these penguins would get off their island and come and visit you.

Or these birds would get off of whatever this is and come and say hello.

From our anchorage, we could see the Tampa Bay Bridge.

It is even more impressive the closer you get.

But we didn’t go under it.

We took a hard right and took the channel in the opposite direction.

That’s when the fun began.

Those white caps we saw in the distance were now all around us.

It kind of reminded me of being in Lake “Washing Machine” Michigan again.

And then the waves grew higher and started coming over the bow.

Soon our nice clean windows were covered in a glaze of salt water.

We had to see the world through salty glasses.

Is that a bridge up ahead?

Is that a marina over there?

We were just going to have to persevere.

We saw quite a few anchorages on our journey.

That is the opposite of how we feel anchoring.

The weather today is still keeping us guessing.

Blue sky in front us us.

We kept moving forward to get to our destination.

That’s Sarasota on the left.

We have to go under the bridge and then hang a left to get to Marina Jack.

While we were underway, the wind was so crazy.

We were hoping that the marina would be situated in such a way that it would block the wind.

Unfortunately, that wasn’t the case.

Sam tried to dock stern in but the wind was so severe that he even had trouble docking bow in.

But at least made it.

We had heard and read a lot of great things about Marina Jack so we were anxious to see it.

There are five restaurants onsite and it is located across the street from downtown Sarasota.

It is a fantastic marina and location.

This is the gateway to downtown.

We were blessed with another rainbow after the craziness of docking.

We really appreciated that.

And we felt safe here.

We walked around the town of Sarasota.

So many things to see.

The downtown area has old and new structures.

It has a lot to offer.

Christmas on a Boat

The thought of spending Christmas on a boat was so weird to me but we had just been home for Thanksgiving and decided to do something different this year.

We had a fantastic day.

There wasn’t anything traditional about it.

We did find an Episcopal Church across the street from the marina so celebrated Christmas there.

It was a beautiful service.

One night, we took a walk around the marina and saw the Marina Jack II that looks like a dinner cruise.

Wouldn’t that be fun?

We decided to go to one of the four restaurants in this building and continue our holiday celebration.

We ended the day with champagne and whatever that is that Sam ordered.

I think it’s a mudslide.

We have seen some of the most beautiful sunsets around the Great Loop and Florida has shown us some pretty ones.

The kind that take your breath away.

Here’s to seeing a lot more of those.