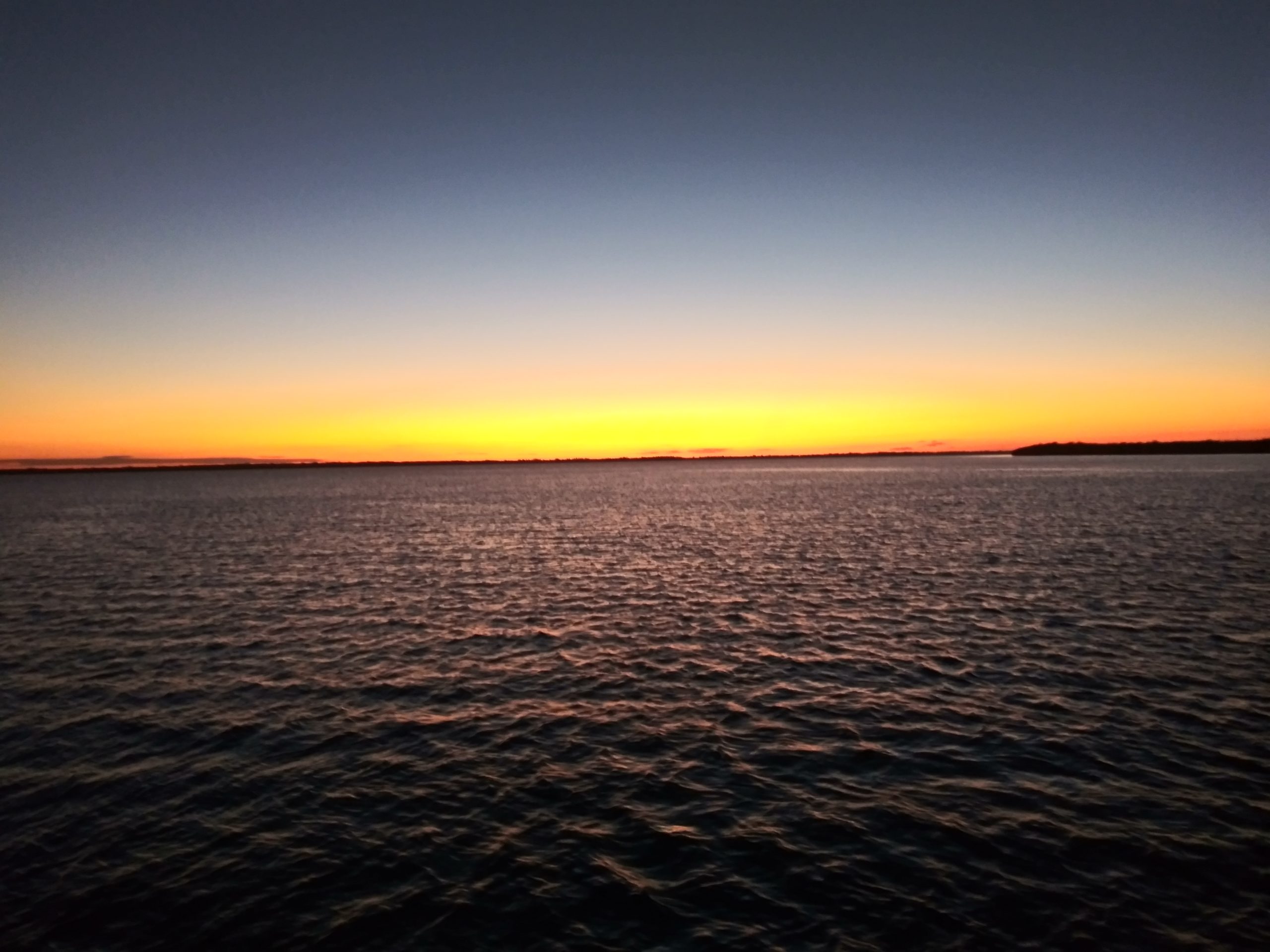 There’s nothing like the first sunrise of a brand new year.

While we were anchored out from Saint James City, I got up early and was amazed at just how beautiful the new year was.

The world is still asleep but not us.

We are anxious to get on our way.

We only had a short trip this morning to get to Cape Coral.

There is a lot of water around but the channel is really narrow in places.

A large boat passed by us so fast it created a giant wake.

In fact, it waked us right out of the narrow channel.

Sam was not happy.

On our way, this particular part of the Intracoastal Waterway is called the Miserable Mile.

We later found out why.

Before we got into our slip, we had to go through a very narrow, winding channel.

This was another time that having AIS on our boat came in handy.

There was a giant 63-foot boat coming around the corner and because of the blind spot, we didn’t see it.

Sam was able to call out to Another Bubble so we all stayed safe.

We stopped to pump out before getting to our slip in Cape Harbor.

There is a restaurant, Rum Runners, on the property that we passed and we also had to go through the smallest lock I have ever seen.

And you know that by now, we have seen a lot!

It went down/up about 11 inches.

The great thing about that lock for us was that we were going to be docked on a wall for a month and the thought of having to monitor those lines constantly due to tides would get old fast.

Fortunately, it wasn’t an issue.

Yay for the lock!

Did I just say that?

Sam and I are planning to stay at Cape Harbour Marina for the entire month of January.

I have to tell you, I was really concerned.

I get bored easily.

How could we stay in one place for so long?

Well, Cape Harbour has so much to offer and we had visits from some of our favorite people so it was really quite easy.

In fact, January is almost over and it’s hard to believe that it’s just about time to leave.

I took these pictures with my phone one morning.

Don’t you think Cape Harbour should buy them from me?

One of our YouTube subscribers said he was watching our videos and then looked out the window of his condo (at Cape Harbour) and saw our boat!

What are the odds?

He sent us these pictures.

He has quite a view, doesn’t he?

Our friends, Joe and Cindy, came to visit us from Texas.

To say we had a good time is such an understatement!

They brought Sam a fruitcake from Corsicana at his request.

Apparently, TSA had a real problem with this gift.

According to Sam this is the greatest fruitcake on the planet so he was excited that Joe and Cindy were able to convince TSA that the cake wasn’t a threat to national security.

We went out to Rum Runners that night and for all you foodies out there, Sam and I split this blackened chicken pasta.

Joe had this incredible pot pie and Cindy had crab cakes.

This is the moment that they found out that they are going to be great grandparents!

How exciting is that?!?

We took the boat out because that’s where a boat belongs!

We saw more dolphins than we have ever seen before in one day.

But do I have any pictures of the show?

They are too fast for me.

We anchored out in Ding Darling.

And had lunch and drank champagne and enjoyed the sunshine.

A pelican came by to see if we had any snacks but he didn’t like the crackers that we tossed.

It was a beautiful day to be out in the water.

We went to the Boat House for lunch and highly recommend it!

You just can’t beat eating outside and listening to live music.

After lunch, we walked out on the pier.

And enjoyed that view of the Boat House.

Then we drove around Cape Coral and made another stop.

Any guesses where we stopped???

We got a knock on our boat one day and it was the very first couple that we met when we started the loop.

Michael and Kathleen from Après Sail tracked us down.

They had major boat issues and had to haul out their boat so they are traveling around south by car during the winter until they can get back to boating.

Seeing them was such a great surprise!

We also decided to host a Docktails so Joe and Cindy could see what that is all about.

I wish they were in this picture!

Kitty, the Harbor Host for Cape Coral, was there and it was an honor to meet her.

Email her if you are in the area and need assistance.

She also has a dock if you need a space to stay.

We had a chance to meet some new boaters and some that we had seen along the way.

You never know who will show up at Docktails!

The visit went by so quickly and before we knew it, it was time to say goodbye to our friends from Texas.

We also met Gary and Donna and since they were in the neighborhood, they took us to dinner at Rum Runners.

They were so generous and kind.

It’s really exciting to meet people that know us through YouTube.

Well, seeing owls living in the ground was certainly new to us.

Cape Coral has the largest population of burrowing owls around.

Their territory is marked with white pvc pipes and wooden stands.

You can look at them.

But you better not mess with them or you will find yourself in big trouble!

We also were contacted by our friends on At Ease.

You know, our buddy boat from the Statue of Liberty trip?

But did I take any pictures of that unforgettable evening?

This is the only picture I took.

I think it is self explanatory.

We also had a chance to meet up with our friends who we traveled a bit with in Canada.

Jerry had to stop for a while and have a couple of back surgeries but Whisky Business was able to get a gold burgee.

Jerry and Debbie have a place at Burnt Store Marina.

It is a golf cart friendly area.

Check out this ride.

Burnt Store does have incredible sunsets.

Just when you think it couldn’t get more beautiful, just wait.

A Visit From Mom

We were also blessed with a visit from my mom.

She lives in Oklahoma and couldn’t imagine our life on a boat.

But we shared Belgian Waffle Sunday with her.

She really seemed to enjoy it.

We took her out in the boat even though the traffic was nuts.

I think she really liked it.

We had an incredible charcuterie board thanks to the generosity of Brian in St. Louis who sent us a care package with all kinds of treats from The Hill.

On our way back, Sam had to make this crazy turn to get us back to Cape Harbour Marina.

When we got back to the marina, we found that someone had parked in our space.

I called the marina number and had to leave a message.

Oar Knot, gold loopers who have their boat in Cape Harbour, had already called and they were sending a captain to move that boat.

After the marina moved the boat, we got back into our slip.

The owner of that boat came by and he was NOT happy.

He said he parked there all the time!

How could we move his boat???

The funny thing is Sam went to the marina office the next morning to pick up a package.

This guy was on the phone with the Dock Master.

He called to complain.

The Dock Master told him that it was a good thing he left the keys in his boat so his captain could move it.

Otherwise, he would have had the boat towed and it would cost this gentleman around $300 to get it back.

We traveled over to Naples because we had never seen it before and it is so lovely.

On another day, we took my mom to breakfast at Boat House because you know we love this place!

I ordered a chicken biscuit.

This is what I got.

Have you ever seen such a thing?

This Weather Buoy was very helpful.

Even though it’s misspelled, it still works.

Our dear friend, Kathy from Oklahoma, told my mom to take us out to a dinner on her to celebrate Christmas.

So celebrate we did!

We started with a melted brie and calamari appetizers.

Then we had steaks.

And finished up with crème brûlée.

Well, Florida decided to throw some winter our way so we had about two days and nights that were way too cold.

Temperatures in Florida are not supposed to be down in the thirties but they were.

So we moved docktails aboard the Here’s To Us!!

Sam counted 22 people at one point.

We were just excited that anyone showed up at all!

The next day we took my mom to the airport and had to say good-bye.

She can’t imagine how happy she made us just for coming.

Since we were in the Ft. Myers area, we decided to go to the America’s Great Loop Cruisers’ Association’s Looper-Palooza.

Our agenda was an afternoon Looper Crawl, where you get to tour other looper boats, and a full day of route briefings.

We had the chance to meet several people that watch our YouTube videos.

It was quite a thrill.

We wanted to help other people do the loop but until we met them we really didn’t know if we were giving them useful information.

They were so encouraging to us.

She wants to start a YouTube channel and document an African American woman’s perspective of doing the loop.

We are very excited about that!

The next morning we had to get up early for our all day session.

Even though it’s been forever since we have set an alarm, the drive over gave us such a show.

Definitely worth waking up to see.

And Kim Russo, the AGLCA director, did a fantastic job of putting a great program together which we enjoyed very much.

While there, we met Richard and Susan, who took us out to dinner at Pinchers.

We not only got to see looper friends and meet some new ones from the two docktails at the marina but we were able to catch a couple of looper reunions.

Balahula had an event at their condo in Ft. Myers.

It was great to see some familiar faces from trips around the loop while meeting some new friends.

And then we went to Tarpon Lodge down around Pine Island and met up with other loopers and new friends before we all go our separate ways.

Been here a month.

Never got bored once.