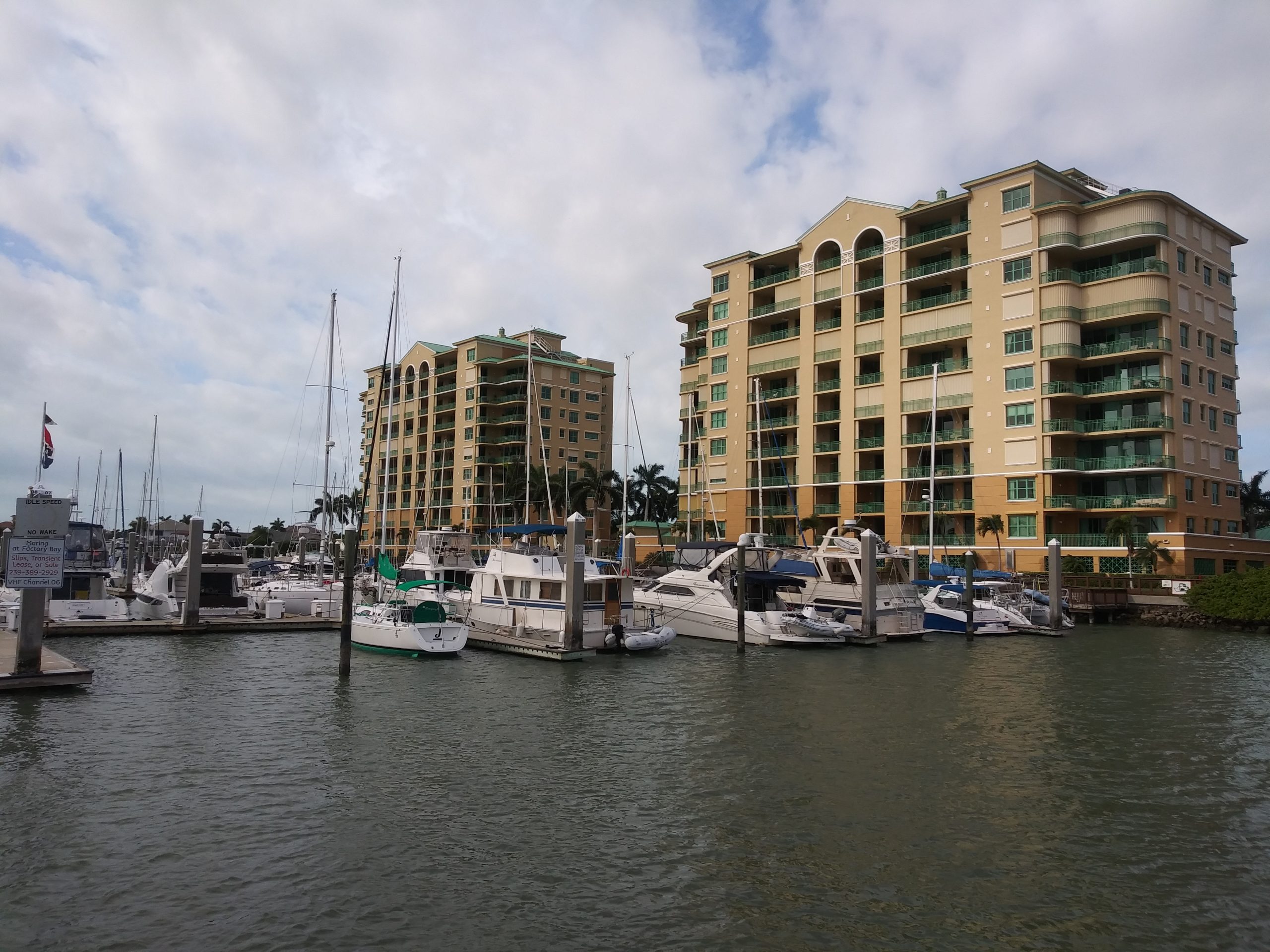 After the very rough 3-hour ride yesterday from Fort Myers Beach to Marco Island, I made Sam promise that the ride to Key West today would be better.

If we didn’t leave today, we would have to wait 3 days until the next better weather window.

We left the Marina at Factory Bay around 9:45 a.m. when the tide was high.

As we headed down the channel, I really thought we were supposed to be seeing a blue, sunny sky.

There was a bit of traffic in the channel but nothing too bad.

It is Saturday, after all.

I was starting to see some blue sky so my mood was happy, my hopes were high.

I was ready for this eight and a half hour day.

Stay in the Channel

As we were leaving the inland channel of Marco Island, Sam followed the breadcrumbs out and hugged the red markers just as he had coming in.

We soon saw the waves crashing over the shoals on each side of the channel.

But I am still optimistic.

It didn’t matter that I was optimistic.

The Gulf does what it wants.

So for six long hours we were pounded by the water.

It came at us from all sides.

We got hit from the front.

And from the back.

Now, I want to be honest with you.

The Here’s To Us!! is a beast and handled the trip with ease.

Me, on the other hand, I was a wreck!

I let my mind get the better of me.

I didn’t want to die!

Every one of the minutes that we were out there.

I was so scared that I wanted to Google and find out if there was an airport on Key West.

I wanted to go home!

I wanted to be far, far away from this mess.

At one point Sam told me to take a couple of Tylenol and go take a nap.

I just about came unglued!

More than I already was, if you can imagine that!

How could I sleep when all of our belongings that weren’t tied down, were flying around and crashing down in the Lido Deck and downstairs in the salon, galley, heads and staterooms?

I took the Tylenol.

As we started getting close to Key West, we started seeing shrimp boats through our salt water covered windows.

There was some strange comfort in knowing that we weren’t the only crazies out there.

Then, We Saw It

After an eternity, there it was.

The marker we had been longing to see – G1.

I have about 27 pictures of G1 just because I knew we were finally getting into the channel heading toward Key West.

I was going to live.

I was still mildly curious, though, as to where exactly the Key West Airport is located.

So just to give you an example of what I mean.

The trash can has never left it’s spot before.

Not even during the Crossing.

And the picture below is the third time that it came crashing down.

I have already cleaned up the mess below.

The first time the trash can decided to throw all of it’s contents around the room including grimy wrappers and wet coffee grounds.

Now I know that trying to restore order prematurely was a mistake.

Cruising with the Big Boys

As we continued to go down the channel toward Key West, we started running into cruise ships.

It was around 4 p.m. when two giant cruise ships started to leave going on to their next destinations.

We were right there in the big water with the big boats.

We docked at the Boca Chica Naval Air Station.

Because of Sam’s service, we are able to stay at military marinas.

One bright spot of the day was our friends from Archimedes that we had done the crossing with, were docked right next to us.

It was soothing seeing familiar faces.

They helped us tie up and then we later went to the marina restaurant.

At the end of the day, there was the most incredible moon.

Not just any moon.

It’s really good to be here.

I don’t know if you’ve heard but there is a lot of craziness that happens in downtown Key West.

We have been here a couple times before.

Once on a cruise ship and once for a week of vacation.

I’m not going to show a lot of that.

You’ll just have to come down here and experience it for yourself. LOL.

There are some incredible sights that are family friendly and this tree is one of them.

And check out this tree.

Have you ever seen anything so confused about which way to grow?

There are a lot of feral roosters and chickens walking everywhere like they own the place.

Then, we decided to do something very tourist-y.

Get our picture taken in front of the Southern Most Point marker.

We walked for about 20 minutes and then saw this line.

So I marched myself up to the front to tried to take a selfie between family shots.

I gave up and went back to the line.

But while I was looking for a shortcut, Sam made friends with a couple in line.

We ended up taking their picture and they took ours.

After that, we tried to take a selfie together.

But we did have a good time.

Somewhere Under the Rainbow

As we were making our way back to the downtown area, we were blessed with a little shower.

And then, one of the most beautiful rainbows I have ever seen.

Time for a Refreshing Drink

We decided to stop at a happy hour that was having a buy one, get one deal.

So, we ordered two “Zombies” and expected to pay for one.

Just as a side note, you might want to read the fine print.

Because there were two of us, we couldn’t share the deal.

You know those pies come from here.

If you have ever had Key Lime Pie and it wasn’t from down here, I seriously doubt that it tasted legit.

As a bonus, we were able to meet up with Sean and Louise on Vector.

We met at the Sunset Deck at the Margaritaville Resort where they were docked.

We had planned to have a drink and watch the sunset and then go for dinner.

And what a sunset it was.

This big boy wanted to get out there to get a better look.

An event that everyone in the area comes out to share.

We all watch as the sun goes down.

Yes, it happens every night but here it is a joyous, meaningful, you-better-stop-and-watch event.

As the sun goes down, several spectators blow the conch shell to celebrate the end of the day.

What a fantastic evening!

We will soon leave Boca Chica and head on over to Marathon for a couple of weeks.

Island life has really slowed us down.

And that is a good thing.