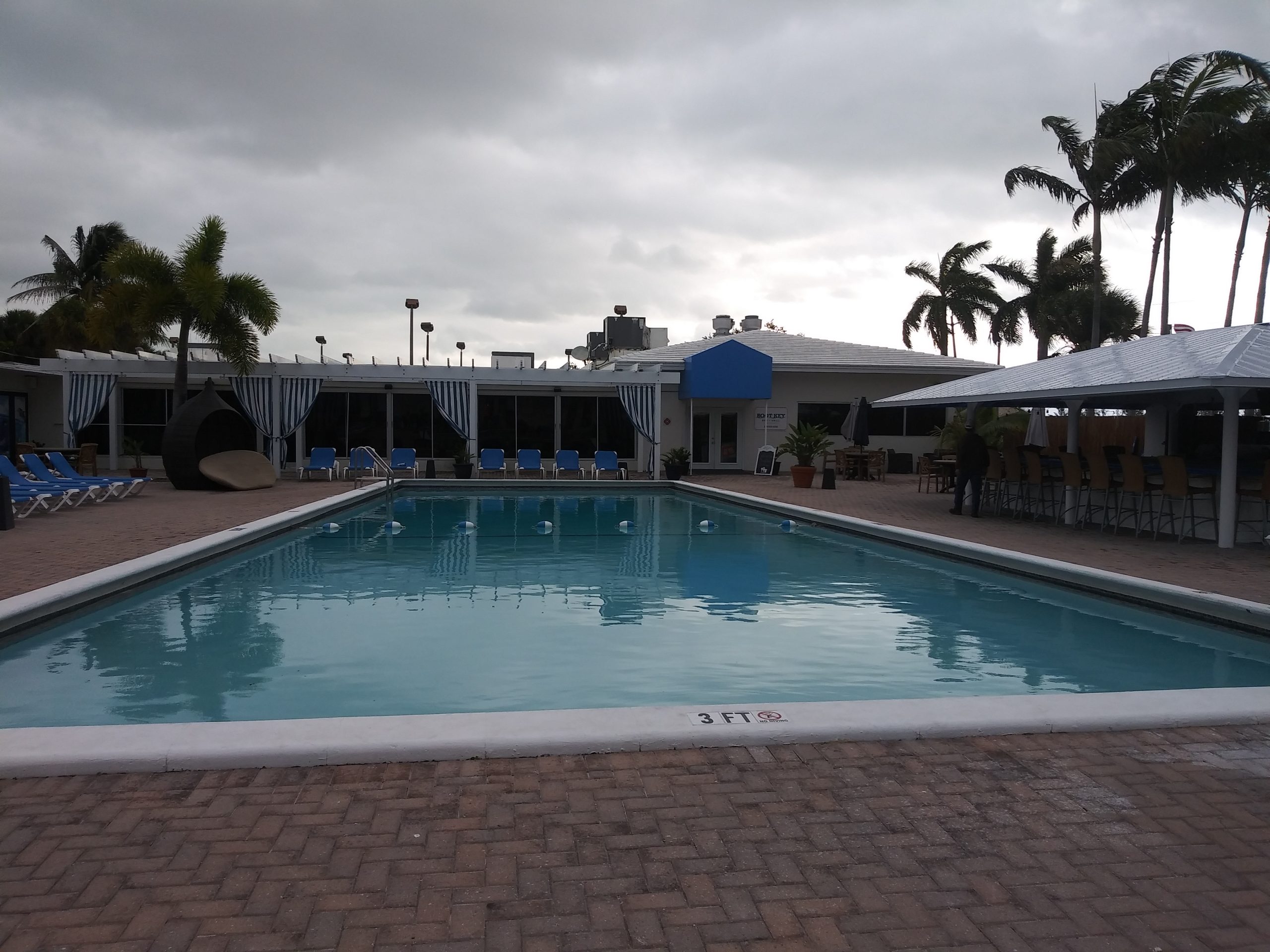 A lovely marina and resort.

The hotel looks like it was built in the 50s.

But the pool area was nice.

Even though the restaurant was closed for renovations, the tiki bar at the pool was open for food and drinks.

We got up at a reasonable hour 7ish and started getting the boat ready for a 9:45 a.m. departure.

We had not moved the old gal for two weeks.

We were a little rusty and we were hoping that she wasn’t.

Those engines started up with enthusiasm and I’m sure wondered why we made them wait so long.

Back Down the Skinny Channel

As we left Skipjack slowly, we passed the line of boats of all shapes and sizes on our left.

We passed the Dockside restaurant that we enjoyed several times.

That’s about where the sea of mooring balls and anchorages start.

Sam tried to follow his bread crumbs out the same way we came in but it was really difficult when there are boats anchored partly in the channel.

We timed our departure for leaving on a rising tide.

Which means that the water is coming in and should be deep enough for us to get through this part.

Although we don’t like seeing 3-4 feet under the boat.

So Sam was dodging anchored boats, hugging the green markers (per Navionics/Active Captain) and maneuvering past oncoming traffic.

It was pretty tense.

He had to get so close to an anchored sailboat to avoid an oncoming sailboat that I honestly don’t know how he missed hitting at least one of them.

And we had the right of way.

Which shows you that most people behind the big wheel don’t know the rules of the road.

Once that craziness was over, we made it out to the beautiful green water.

And it was calm.

I couldn’t believe we were in the Ocean.

I had spent a lot of time battening down everything that looked like it would move.

I had certainly learned my lesson from crossing big water in the past.

So I was a very happy first mate.

I knew before we left that we were going to be anchoring a few times in the coming days.

I had made a few meals for us in preparation.

And I even tried to have a good attitude about it.

But about 45 minutes before reaching Islamorada, the wind and the waves started to pick up a bit.

Just what I need.

In addition, Sam had McGuyver-ed a contraption that I was going to have to get on my belly and attach to the anchor.

Something called a trip line.

It has a fender on one end and is supposed to let us know where the anchor is at all times.

I’m already mad at it.

So the waves are causing white caps and the wind is coming at us from the north.

Sam makes the turn to get closer to shore and the conditions are now right in our face.

Plus, there are many crab pots that we have to dodge.

I’m still trying to have a good attitude.

Anchoring is not going to beat me!

After a long while we find what we think is the perfect spot.

I went inside to turn on the windlass switch under a step in the salon.

I go out with the contraption and Sam gives me installation instructions through the headset.

Then I proceed to lower the anchor using the windlass.

I step on the pedal.

Oh, don’t tell me the windlass is broken!

I start to mildly freak out.

Sam finally convinced me to go check the windlass switch one more time.

I didn’t want to but I did.

And yes, that was the problem.

I had turned it off earlier instead of on.

I go back out to the windlass pedal and viola there she goes!

As we go through the motions of lowering the anchor and getting it set, I’m starting to think we may have this anchoring thing down.

Wouldn’t that be awesome?!?

So now that we’ve anchored, I start putting the items that I had secured back in their place.

Within a few minutes our boat was once again home.

We usually don’t watch TV while we are anchoring.

Although, Sam had already checked the reception and we only could pick up two Spanish-speaking stations.

So we opened up a bottle of champagne and chatted about a wide variety of topics.

Things like what we think about the snarky comments we get on YouTube and Facebook, what we’re going to do after the loop, what our next boat should be, etc.

After a lovely evening of champagne, chicken wings and chatting, we went to bed early.

But not before we enjoyed the sunset.

It just kept getting better and better.

And then more better.

It was beautiful and a nice reward for getting the anchor set with just a little bit of drama.

Our plan was to get up early and head to Miami.

We had been asleep for about a couple of hours when the anchor alarm went off on Sam’s phone.

He got up to check it and everything seemed to be ok.

The alarm was going nuts!

Sam went to check it again and found that the anchor had drug about 50-60 feet.

We have a fantastic anchor and have never had any problems.

It may have had something to do with the 24 mph wind we were in but I’m not sure.

I do know we barely got enough sleep.

We’ll have to wait until tomorrow to see what happens.