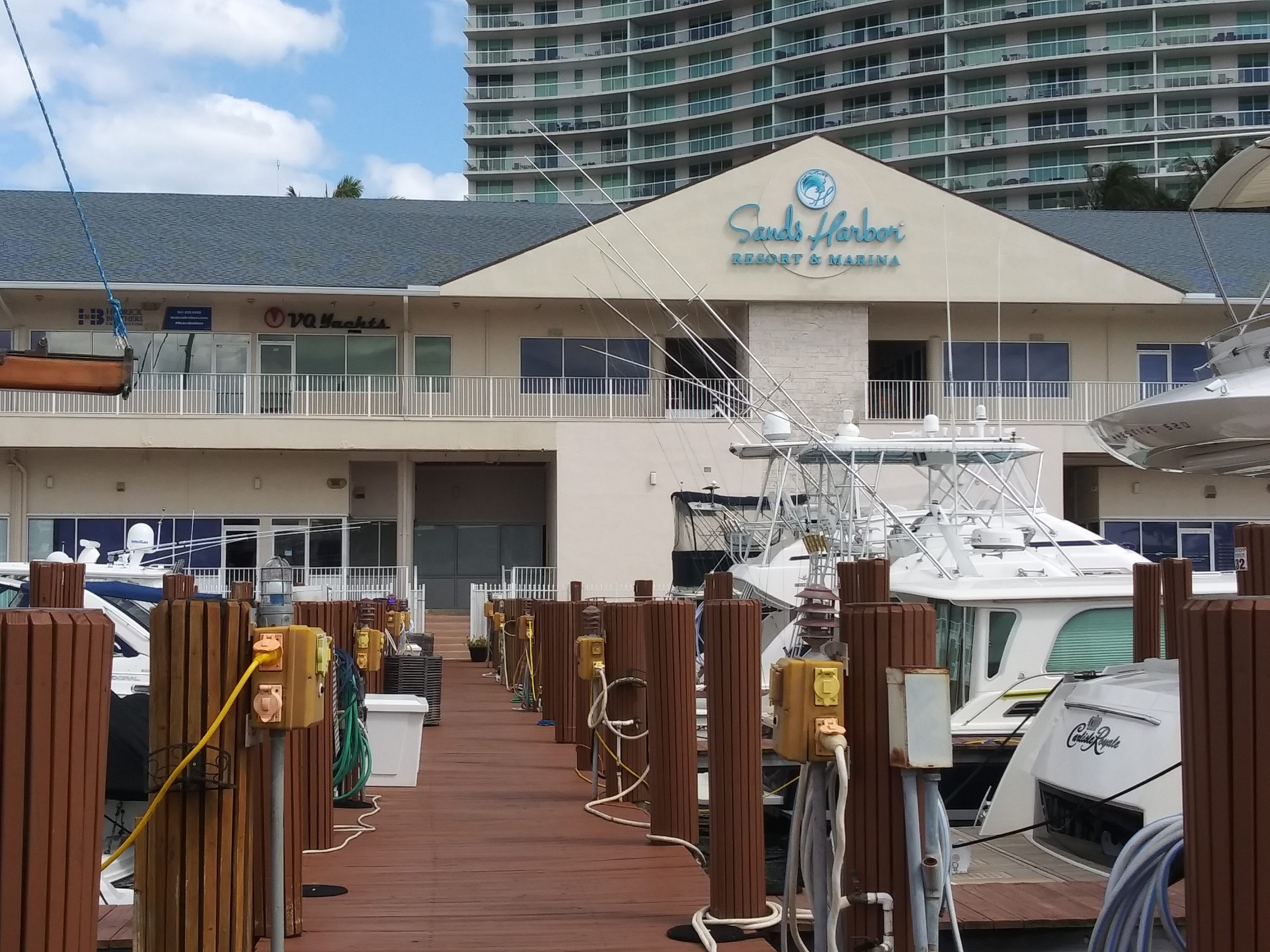 Usually, when we pull away from a marina or anchorage, I have my cell phone ready and take a video of us pulling away.

Well, today there is a very good reason why that wasn’t possible.

When it was time for our departure, the wind was fierce.

Fortunately, we were stern in so in theory, all we had to do was take off and point ourselves toward the ICW.

But in reality, it took a lot of team work, not just from Sam and me, but help from some of the folks docked around us.

We were all armed with boat poles, just in case.

Sam slowly moved us out of the slip and used the bow and stern thrusters against the force of the wind.

Right in front of us was the fuel dock, that he had to clear.

Behind us were pilings and boats that our dinghy had to clear.

I do not know how he did it but Sam once again got us out of a tricky situation.

So now you can enjoy a picture as we say goodbye to Pompano Beach as we go down the Intracoastal Waterway.

And a view out the front.

Yes, it is a very beautiful day but oh, so windy!

Just when I thought we were finished with the giant houses, here they come again!

Looking down the canal, you can see the boat docks lining each side.

Today we had to go through seventeen bridges.

We needed six of those to open up because they are so low we can’t fit under them.

So Sam had to coordinate the timing throughout the day.

Some bridges open on the hour and half hour.

And then some bridges open on demand.

It was crucial on this travel day.

Since we have been on this stretch of the Intracoastal Waterway, we have seen many incredible boats.

There are a lot of commercials that run in Texas and they tell us that we are Truck Country.

Well, now in Florida we feel like we are in Boat Country!

And it feels good!

We just keep being overwhelmed with beautiful homes, beautiful boats and beautiful bridges.

That boat tied up next to this giant one looks tiny.

This one looks like it could cross the ocean.

What a place. Er. Palace.

Isn’t this a cool looking boat?

And just when you were getting bored, another bridge.

I really had no idea there were this many bridges in Florida on the ICW.

I mean, it makes sense that there would be, I just never thought about it.

As the windy, Monday went on, the traffic increased.

It kept us on our toes and the bridge operators busy.

Some of the bridges looked like we couldn’t get under them but Sam had it all figured out.

This is certainly a stretch that takes a lot of planning.

Sam spent a few hours making sure that he knew which bridges that he would have to call either on VHF Channel 9 or on the phone.

Some of the bridges were close together so we went through with the same boats.

Some stretches of the ICW, we went through by ourselves.

Isn’t this an interesting looking bridge.

I think if there was a princess in Florida, she would live here and rule.

And the bridges keep coming.

Seventeen bridges in one day is a lot.

However, he couldn’t put the boat on auto-pilot or in this case it would have driven us right into the abutment under the bridge.

Why does it do that?

We did leave the narrow area of the ICW and move out to a more spacious area.

Although, we definitely had to stay in the channel.

Today was the day, we were going to have to pass the Southern White House, as it has come to be known.

When we attended the Looper Palooza in Ft. Myers, Dave Fuller gave us a heads up about the security zone in this area.

If President Trump goes to Mar-a-Lago, then the roads and waterways are closed.

Don’t even think that you are going anywhere.

Sam had already checked the security alerts and found out that we weren’t going to have any trouble today.

As we passed through the construction, and under the bridge, we didn’t have to worry about the Secret Service, just about coordinating with other boats.

As we passed Mar-a-Lago, we were reminded of the time we were in Kailua, Hawaii one Christmas.

Sam was driving and I noticed that right as we passed through a light, two white vans pulled into the intersection to block it.

We went on to our destination at a sports bar.

There was an announcement that we would have to stay at the bar until they got the all clear call.

President Obama and his family were in the area so everything was shut down and everybody had to stay put.

We were thankful that we were at a sports bar and not running any other crazy errands so the inconvenience didn’t really affect us negatively.

But if you are going to travel in this area, be aware of the security concerns.

As we continued, we weren’t really sure where we were going to anchor.

We wanted to get as far as we could.

The sights were beautiful and we had been through all the bridges that we had to have opened so we continued on.

Sam talks about “Low Steel” when going under bridges.

It just means the area of the bridge where the steel is the lowest.

on this bridge, the lowest part is on either side.

So stick to the middle where it is the highest.

Another thing to keep in mind is the timing of the tides.

That’s how you know for sure that you can fit under without a bridge opening.

There certainly are a lot of giant yachts in this part of Florida.

Sam found out about this anchorage from a man we met at Sands Harbor the day before.

It’s set back not too far from the ICW but surrounded by a marina, beautiful homes and condos.

It is located in the northern part of Lake Worth right across from Old Port Cove Marina.

In the area where Jack Nicklaus lives.

We dropped our anchor with no drama.

We did it like we were good at it.

Maybe we are finally getting the hang of it after 4,200 miles on the Great Loop.