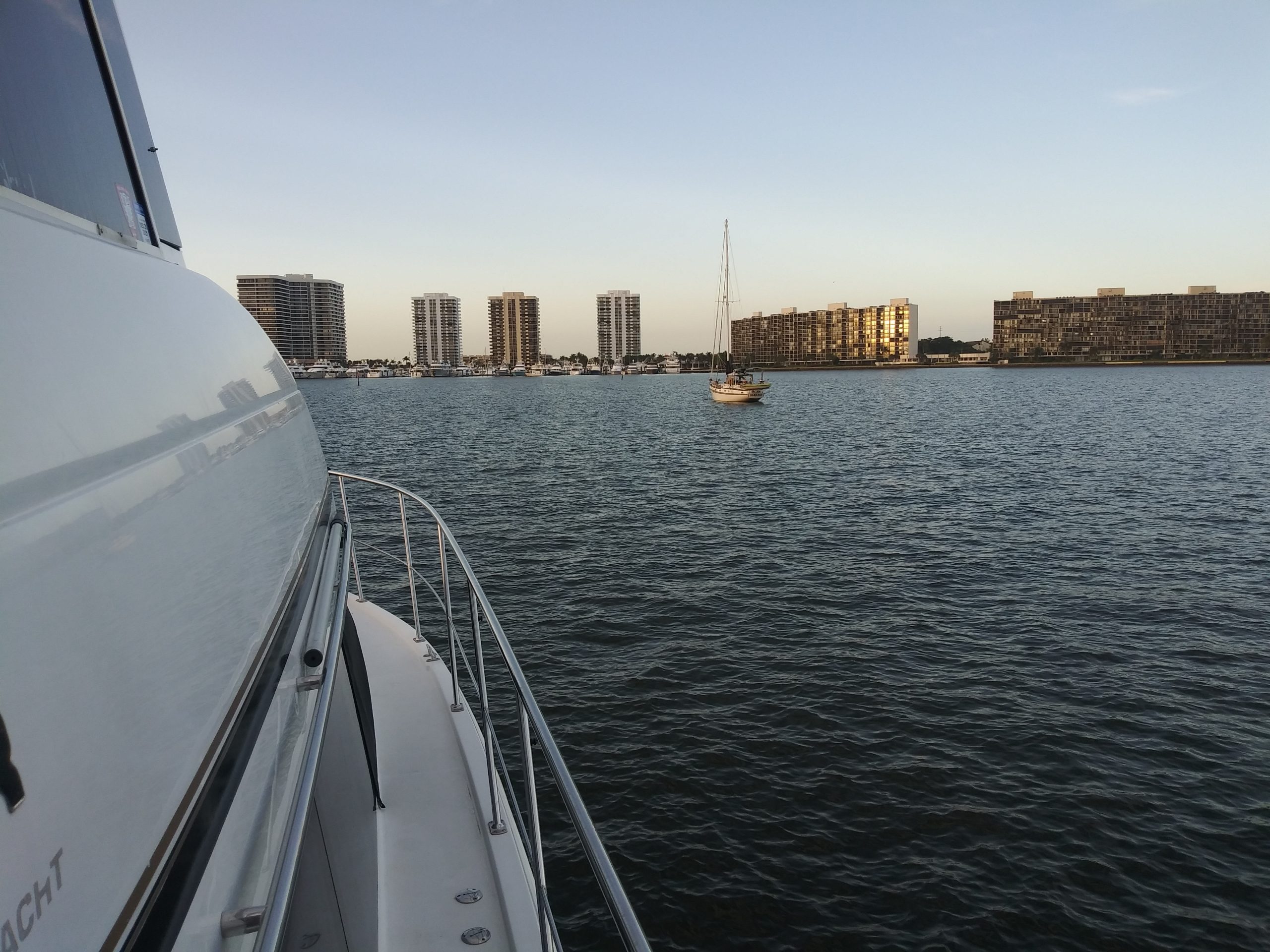 We woke up early by accident.

We had such a peaceful night’s sleep in this anchorage, we woke up naturally.

There were a few clouds as the sun came up but it just made the morning that much more beautiful.

We were the only powerboat there anchored among the sailboats.

So, we quietly made our exit and started our journey to Vero Beach.

It was about 8 a.m. when we left but still a little too early for the residents around.

After we made our way out of the anchorage, we got back on the Intracoastal Waterway and right away, we saw our first bridge of the day.

Not a cloud in the sky as we moved along.

It was the perfect day to be out there.

Today we moved along at a leisurely pace.

Sam made reservations for us at the Vero Beach City Marina.

They were full but offered their fuel dock.

So, we took this opportunity to cruise at a slow pace and enjoy all the restaurants, homes, and boats that we had the chance to see today.

Look at these giants just sitting over there waiting to be used.

There was some traffic today but not much.

In some stretches we pretty much had the ICW to ourselves.

We also saw a lighthouse today and I don’t think we have seen one since heading into Miami.

We made the turn around the bend after the lighthouse and continued on the ICW.

I really love going under bridges but I don’t really like the ones that we have to wait on to be opened.

We did see the most interesting sight.

A couple of boats pulled up on the major shoaling area right in the middle of the channel.

They pulled out the beach chairs and let the dogs run free.

Sam wanted me to take a picture of this boat as we drove by.

We have no idea what kind it is but take a look at those window panes at the bottom.

Some of the sections were densely populated while others had very little signs of life anywhere.

We watched this bird fly from one side of the channel to the other with a large branch in its mouth.

Still working on putting that nest together.

This guy was taking the opportunity to fish in waders to get up close and personal to the wildlife.

I do hope there are no alligators in this part of Florida.

As the day went on, the traffic increased.

We don’t mind sharing the ICW – for now.

The water is wide but the channel is not so we keep driving down that wet highway.

We look like we know what we’re doing as we pass the law enforcement boat.

I have never been a fan of these lines across the water.

We have some here at our lake in Texas.

I know they are necessary but come on.

Couldn’t there be a more aesthetically pleasing way to construct them?

And then we saw this.

And then we saw this guy pushing this.

It was a very confusing time.

Sam put the side antennas down a bit because in this part of the Intracoastal Waterway, there are many bridges and he wanted to make sure that we could get under some without having to ask for an opening.

I’m just going to take my overactive imagination back inside and enjoy the bridge.

We saw this inlet but we preferred the safety and security of traveling down the Intracoastal Waterway.

Even with all the bridges.

And look what we saw on the side of the channel.

As we continued on, we saw several sailboats anchored over on the side.

They looked so peaceful there.

Then there was this guy.

First time we have seen a commercial anchored like that.

And the bridges keep coming.

It’s always comforting to see the serenity of a sailboat.

This is the bridge we have been waiting for.

And then a sailboat school showed up.

Right in front of us.

And yes, a couple of them overturned, as beginners tend to do.

But the instructor in the motorboat behind them all corralled them and righted them in record time.

And boy, were we grateful!

After the bridge, we made a hard right and headed up the channel to the marina.

There were several boats anchored with two and sometimes three boats rafting together.

Sam said that’s why they call this “Velcro” Beach.

Is he kidding or not?

We arrived around 5 p.m. and they tied us up and hooked the power up.

We were so excited to finally be there.

But we didn’t get to stay in Vero Beach long.

Since we were at the fuel dock, we would have to leave the next morning by 7:30 a.m.

Those are the rules.

And of course, we will obey!