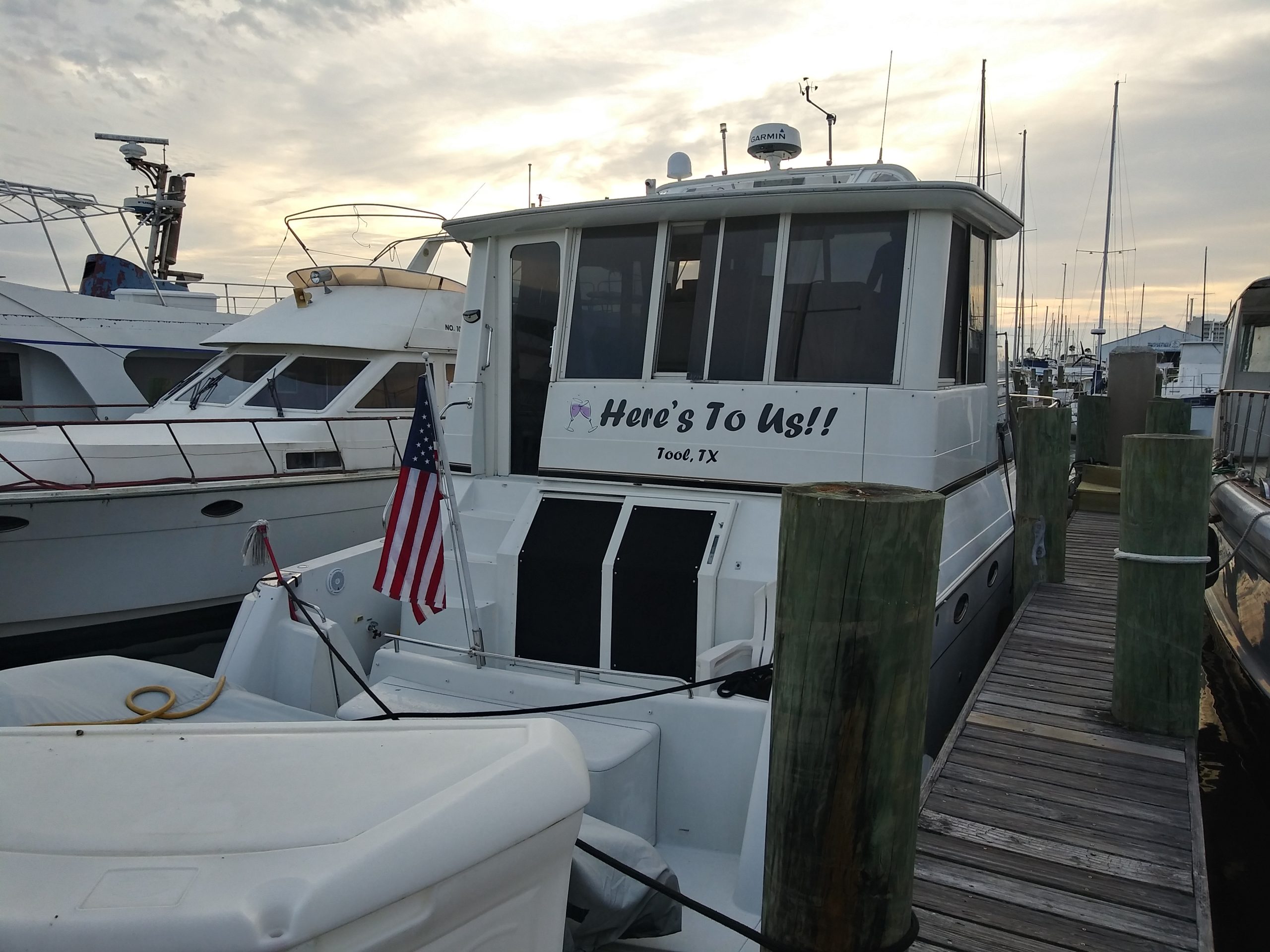 We woke up in a good mood.

After staying at the Titusville Marina for two nights, we were ready to move on.

There was a park on both sides of the marina exit.

I never noticed when we entered the marina, that this island had a statue on it but it looks very European.

As we pulled away, there were a few fishermen that made their way out ahead of us.

They acted like they didn’t even see us and moved along at their own pace.

We are hard to miss but OK.

But we are optimists.

Sam’s more of a realist.

So we left Titusville Marina behind and made our way past the anchorage.

We came to the “most always” open railroad bridge to NASA.

Sam does an excellent job of explaining how and when the bridge opens in our video below.

But I just think it looks cool.

We started about 8:00 a.m and the sky looked ominous.

As we approached this channel, we slowed way down.

Not just because of the sign but there were fishermen close to the opening.

As we got a little closer, the fishermen started yelling at us.

Sam slowed down even more.

When we were close to them, I could hear them yelling and cussing and it wasn’t pleasant.

One of them called us, Mother Trucking Yankees!

Although, it wasn’t “Trucking.”

I looked back at the horrendous wake we must be making but I just didn’t see it.

Imagine their surprise when they saw our hailing port of Tool, Texas on the back of our boat!

We caught up to Howaho who we met at Titusville Marina.

They just started the loop in Ft. Lauderdale.

I was still fuming over the unfriendliness of the locals but it didn’t seem to bother Sam at all.

I don’t understand that.

So, we took a few pictures to send Howaho as we passed them.

I remember first starting out on the loop.

Sam ran the engines up until we got to civilization.

Then, we passed a marina, a RV park, a trailer home park and then a row of homes with docks.

On this strip, we ran into several boats.

Boats of all kinds.

And usually boaters are friendly and will give you a wave.

It was very unusual.

After waving our way from Baltimore north and then up through Canada and down the rivers, almost everyone waves.

Finally, we got a wave from a sailboat but I took that to mean they weren’t from here.

We also saw a lot of boats that had been abandoned.

I did see a few dolphins in this area so it wasn’t a total loss.

We aren’t used to this.

The sights were lovely though.

Then, we made a right turn to continue to follow the Intracoastal Waterway.

And proceeded to get flipped off by another fisherman.

What is going on here?

Then we met some paddle kayaks under the bridge.

Just when I was about to write off this part of Florida, we saw a friendly gentlemen in the back yard of one of these houses wave to us.

Now, my eyesight isn’t that great but I’m going to believe it was a friendly wave.

We continued seeing abandoned, trashed out boats along the way.

So many that I suggested to Sam that we start some kind of boat salvage business to clean up the area.

He asked who would pay us and the conversation ended there.

You know how it is.

You start out in a good mood and then when things go bad, you just want the day to be over.

We did see a diving boat with “salvage” written on the side so someone found out who pays to remove stuff from the ICW.

I tried working on my attitude.

There were still some fascinating things to see.

Another one bites the dust.

This boat asked for a pass and we really enjoyed window shopping.

That top part may make it too tall to do the loop but it sure is beautiful.

When we saw the pink condos we knew we were getting close.

The channel to the Halifax Harbor Marina was right before this bridge.

We arrived to the Halifax Harbor Marina in the early afternoon.

The bad news is that it’s really windy.

The good news is they put us on the T-head.

So, it worked out great.

We did get out to walk so we could see some of Daytona Beach.

We heard that a motorcycle bike week was coming up so we happened to get there before the crowd.

There were definitely some sights to see.

How could you pass this up?

There were several stores and restaurants in this area.

It’s always nice to be able to walk from the marina into town.

We ended up here at McK’s.

We feel right at home.

After experiencing several splinters pointed the wrong way, things were looking up.

Everybody has a bad day every now and then.

We were happy to call Halifax Harbor Marina our home for the night.

We were entertained by the Lady Dolphin of Daytona going in and out.

And then we looked out and noticed a beautiful sunset.

What an incredible way to end the day!