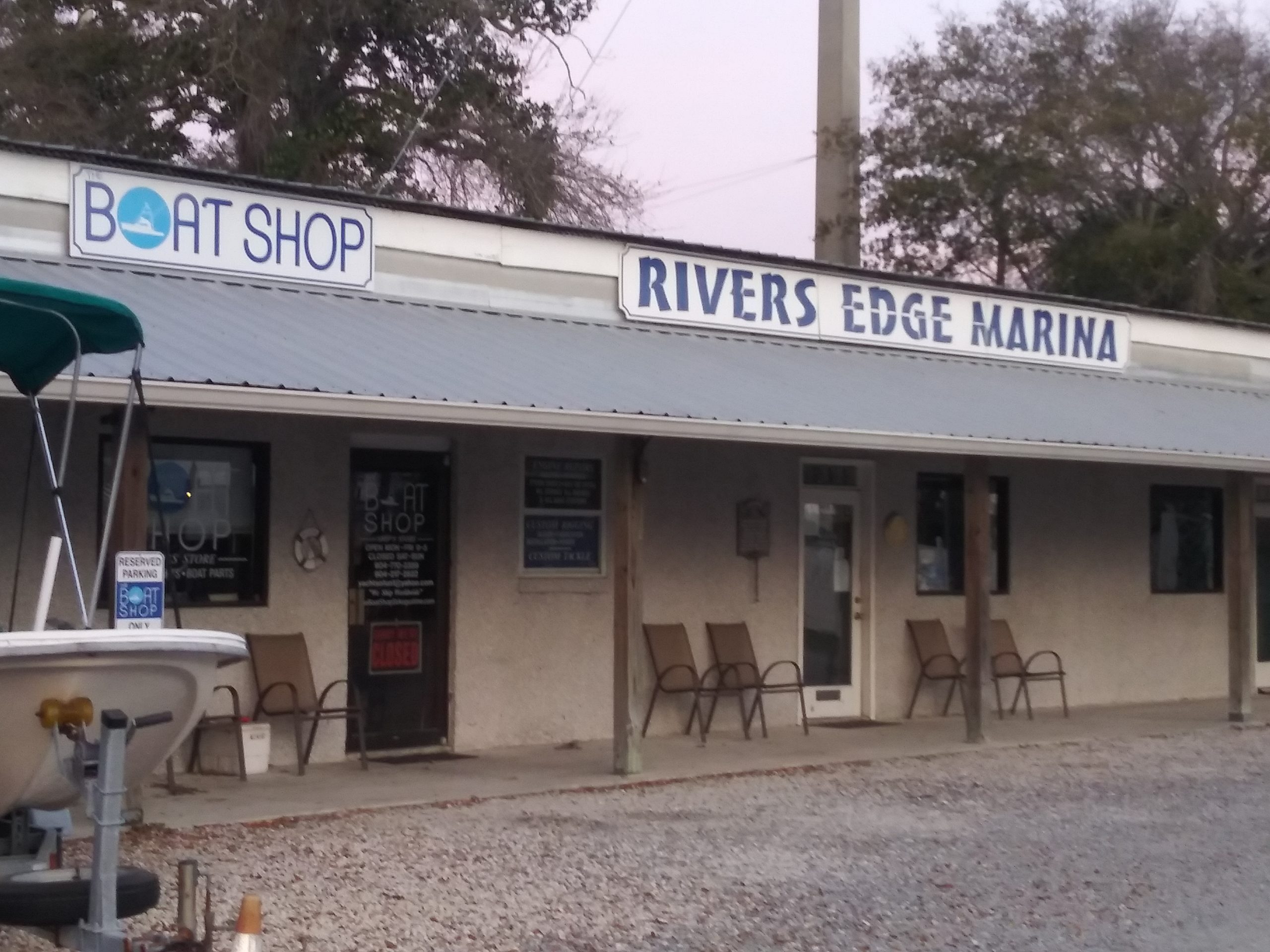 We left the River’s Edge Marina in St. Augustine, Florida very early the morning of March 8, 2020.

There are 17 bridges that we will face but we only need two of them opened.

The first bridge and then the last.

It’s going to be a long day but we have plans to return to Texas on March 10th for a couple of weeks to take care of doctor appointments and catch up with friends and family.

From where we docked to moving out to get back on the Intracoastal Waterway, Sam knew it was going to be a bit challenging.

You can see from the picture below, we started from the black circle and wound our way around.

We had to pass an inlet that we could have gone out to the Atlantic Ocean but we made a left turn and went the ICW route.

We left our T-head docking at Rivers Edge Marina.

We really enjoyed the convenience of having a great restaurant on the premises.

So handy since we were only going to stay for one night.

The route back down this channel was narrow but Sam handled it with ease.

We were blessed with a beautiful, cloudy sunrise.

We actually saw the sunrise a couple of times through the clouds. LOL

We did have to time our arrival to get to the Bridge of Lions for a scheduled opening.

Sam found out that there are actually statutes of lions seen from the street side that are copies of the Medici Lions of Italy.

I would love to see those someday.

After the bridge, we could see the inlet to access the Atlantic Ocean.

Approaching this area, the current and wind were fighting against us.

Then, as we started to make the turn, the current carried us in so we started saving fuel.

Look at the force of the waves on the shore.

Once inside the channel, we noticed our salty windows were worse.

In this area the channel is more narrow with homes on each side.

Then, we came to the Palm Valley Bridge.

It only took 19 months to build.

We did notice as we continued on the ICW that there was some traffic.

I would have thought that the wind would keep everyone home but that was not the case today.

There were so many beautiful homes along the way.

We saw this tow, named Bulldozer, coming toward us and it almost seemed like we were back on the Mississippi River.

Little did we know this was a sign of what was to come.

Wouldn’t it be fun to live here?

With a fully staffed housekeeping and landscaping crew, of course!

As we went along, we left the shelter of the narrow channel and then quickly remembered just how windy it was.

There were many beautiful homes along our route.

Another Flashback to the Mississippi River

Yes, the tow we saw earlier reminded us of being on the Mississippi River but then we had another surprise coming.

Sam knew because he is an incredible planner but I had no clue about what was to come.

As soon as we went under this bridge, eddies started twisting and turning our boat.

I thought we were done with those.

Not too much further down the canal, we ran into this.

OK, we didn’t actually run aground but we did find ourselves on the wrong side of the red and green.

It was quite tense as Sam put the Here’s To Us in idle and then slowly maneuvered us back into the channel.

This was our long and winding trip.

We left the ICW where the green circle is and travel through the St. Johns River, under bridges, to the Ortega River before we reach our destination in the lower left corner.

On the St. Johns River, we started getting into an industrial looking area.

There was a giant dredging operation going on with a lot of machinery out there in the river.

Industrial sights along the way.

Then came the Napoleon Bonaparte Broward Bridge which was named after a Florida Governor who was famous for draining the Everglades.

It is an impressive 169 feet under.

The Here’s To Us had plenty of room.

There was a giant container ship being loaded.

This is a fascinating operation.

Sam continued to communicate with some of the tow operators as we passed by.

We saw two bridges close together in the distance.

The first was called John E. Matthews named after a Florida Supreme Court Chief Justice. In 2013, a Navy ship hit it and it had to be closed a month for repairs.

The second bridge was names after Isaiah David Hart and is nicknamed, the Green Monster.

Traveling under these giant bridges and passing by mammoth ships, I felt like the Here’s To Us was a little rubber duckie in a great big tub.

And I had never seen artwork on large storage tanks before.

After going under the Green Monster, we started to see downtown Jacksonville.

It is so humbling and really incredible to be so close to a downtown area.

It is fantastic to see it so close.

We did pass this Maxwell House building and if it weren’t afternoon, I would have loved a cup.

What do you think they’re drinking on there?

Such an incredible sight!

I would love to see it at night.

This is the Main Street bridge and it was built in 1941.

These two are so close together.

The Acosta bridge named after a city commissioner was 75 feet tall so we didn’t need it to open for us.

But the FEC Strauss Trunion railroad bridge is only 5 feet.

It was already open when we went through but it closed right behind us so there were a few sailboats that had to wait.

This is the Fuller Warren bridge which is I-95 and was opened in 2002.

Even through salt soaked windows, that sailboat is still lovely.

I remember going under this bridge and Sam seemed so nervous about the next part of our journey.

Immediately, we saw this peaceful sailboat.

Who wouldn’t be calm just by looking at this scene?

Why was Sam concerned?

It was mid-tide so we were really going to have to watch the water depth.

I sat next to Sam with my eyes glued to the depth gauge and I called out changes to him.

We also had this crazy turn to stay in the channel.

We finally made it through but then had to go through the Ortega River Bridge which is only 9 feet.

It’s an open-on-demand kind of bridge.

We finally made it to our destination – Lambs Yacht Center.

We were going to have some work done on the Here’s To Us while we head back to Texas.

Two days after we got the Here’s To Us situated, we took an Uber to the Jacksonville Airport.

We were so excited to get home to take care of a few things there.

Little did we know this was just the beginning of our long, extended stay at home, thanks to the COVID-19 pandemic.

We can’t wait to get back to Jacksonville, Florida and complete the next phase of our Great Loop Journey.