What is America’s Great Loop? 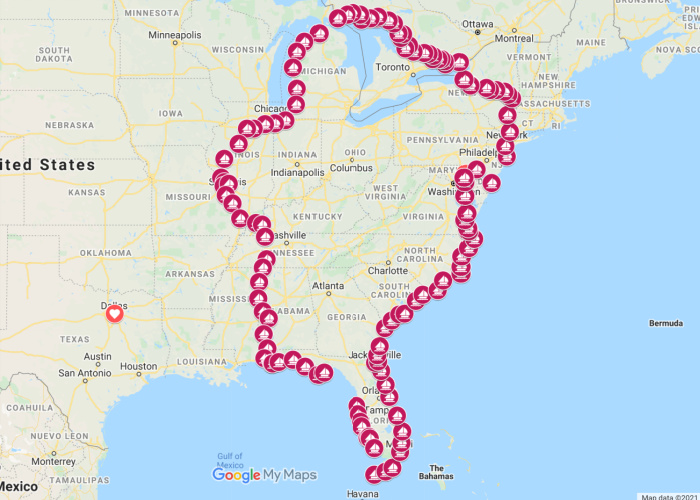 We decided to conquer America’s Great Loop for our first yachting experience. Oh yes, we are famous for biting off more than we can chew!

But what is the Great Loop?

The Great Loop is a 6,000-mile circumnavigation of the eastern United States and the southern part of Canada.

The route includes the Atlantic Intracoastal Waterway, the New York State Canals, the Canadian Canals, the Great Lakes, the inland rivers, and the Gulf of Mexico.

A of this length, if all goes well, will take one year. On average, about 150 boats will complete the loop in any given year.

We went up the east coast during the Spring.

Then, made a left turn through New York and went up to Canada before heading over to the Great Lakes during the Summer.

We traveled south during Fall by going to Chicago then working our way down through the Illinois River, the Mississippi River, the Ohio River, the Tennessee River, and the Tennessee-Tom River. After reaching Mobile, Alabama, we went east bound on the Intracoastal Waterway to Florida before crossing the Gulf of Mexico.

During the Winter, we traveled around the southern part of the U.S. and spent some time in the Florida Keys.

Watch this video from America’s Great Loop Cruising Association and you’ll find out why we wanted to go. 🙂

Here is Our Introduction of the Great Loop

We define what America’s Great Loop is from a boater’s perspective.

Have You Ever Heard of America’s Great Loop?

We didn’t know anything about this phenomenon until a couple of years ago and most people we meet haven’t heard of America’s Great Loop.

Let us know below.