Day One on the Great Loop 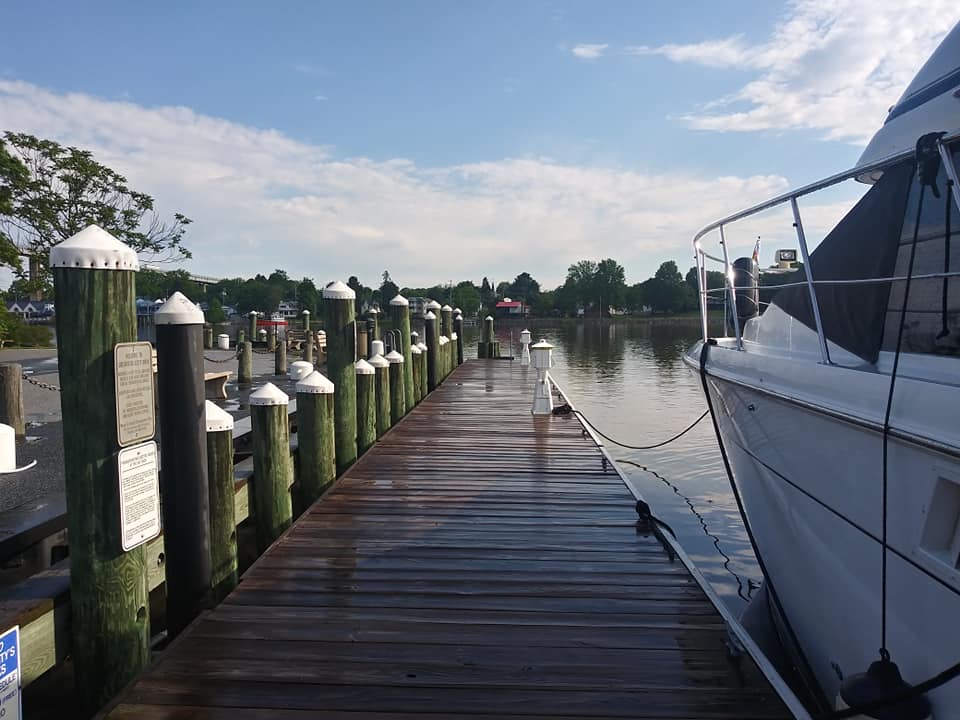 After buying our boat that was docked at Cutter Marina (Essex, MD), we departed Baltimore, Maryland on May 15, 2019.

We headed out about 12:15 (noonish) on our way to Chesapeake City, MD and made it there in 3 hours.

We tied up at the free Chesapeake City dock because Sam is a pilot. Now, it’s time for my favorite joke.

Do you know how copper wire was invented?

Two pilots fighting over a penny.

We left and some of our neighbors helped us shove off and wished us well.

Cousin Rus from Pennsylvania is with us for moral support.

The weather was perfect.

It was a three hour tour but we made out much better than Gilligan and the Skipper.

When we pulled into the Chesapeake City dock, Sam acted like he had been docking all his life.

He had only done it twice before. With help. A lot of help.

But when it was time, he was the professional captain that I was hoping he would be. So smooth.

Me, on the other hand, I was running around like a chicken with my head cut off.

My job is working the lines (making sure the ropes are tied to the dock and the fenders are up in the right place.)

Even with calm, cool and collected Cousin Rus here, I was nervous.

Fortunately, the couple that was already docked in front of us, came out and helped us with the lines. God bless Dennis and Julie. 🙂

They were headed back to their home in New Hampshire after boating for months all over.

We are finding out that boating people are kind and helpful as if they remember what it’s like being out in a big boat on their first day.

Right after we docked, another boat came in with the America’s Great Loop Cruiser’s Association (AGLCA) flag flying. They were on their first day of the loop also.

What are the chances of that?

So we met Michael and Kathleen McGill on Apres Sail. They are from Annapolis, MD and were at the AGLCA’s Spring Rendezvous that we attended last week.

We didn’t meet them there but we have already learned a lot from them during that short meeting.

Next step, now that we are docked for free, we need power.

And not the cut throat, egotistical kind.

We need electricity to make our floating home livable.

We tried to hook up power on the free city doc pedestals but it did not work. At all.

So, we had to run our Inverter, whatever that is, and occasionally the generator to survive.

Apparently, we have a generator so we can power up everything while we anchor out. However, Sam doesn’t like to use the generator and leave an engine running when we are sleeping.

This would have been really good information to know before we even bought this thing.

He first turned on the generator and I put the AC in our bedroom on 65 to really get some chill going.

Then, he had the nerve to turn it off.

Menopause and no AC do not even work. Can I get an AMEN, sisters?

I don’t care if we are this far north. I NEED AC!

I did have a small fan all night blowing on my face which was powered by the Inverter. So that was little consolation.

Sam was up every hour watching the Inverter so I would say he did not get a good night’s sleep.

I took a Tylenol PM so I slept great. Kinda great. I mean, I didn’t have an air conditioner so there’s that. Did you know we are from Texas? The land of sweet refrigeration.

Anyway, we made it through our first night on our first day of traveling around America’s Great Loop.

Pictures of Our Stay in Chesapeake City, Maryland