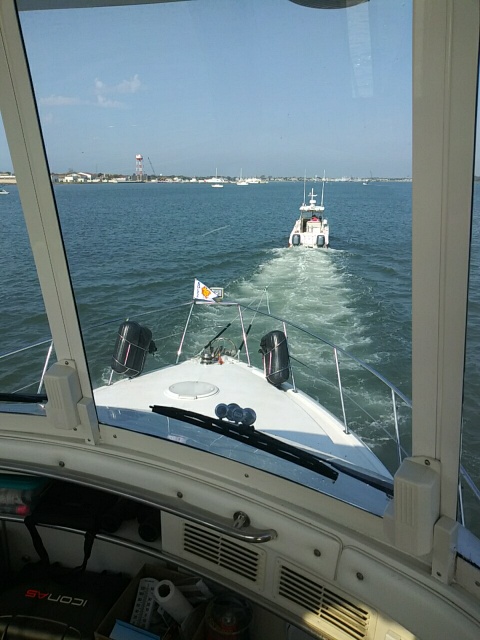 I just had NO idea it would be so soon.

I can’t tell you how many people told us to “learn your boat” when I asked what advice would you give a newbie.

I didn’t even know what that meant.

I know where all the nooks and crannies are.

We built storage where there was none.

When he wasn’t satisfied with the info he read, he hired experts to teach him or got advice directly from Carver, who has been magnificent.

The most meaningful part of that advice is knowing what your boat needs to run and what happens when it is underway.

We have learned about our boat the hard way.

The only way we could.

Sunday was a beautiful morning and we left Utsch’s Marina about 7:30 a.m.

We were heading north to Hoffman’s Marina in the Manasquan Inlet.

We traveled down the Cape May Inlet heading out to the Atlantic and then made a sharp left turn.

I’ll admit that we were a little nervous because it would be the first time for us traveling on our own in the big, blue ocean.

Our boat has a 4 1/2 foot draft (the part of the boat that is below the water) so we have to watch the water depth all the time.

If we had less of a draft we could use the Intracoastal Waterway.

Going out to the ocean was our only option.

So there we were.

Out in the ocean.

Sam had the throttles up to 2100 RPM for cruise and was only getting about 10 knots of speed. We expected 18-20 knots.

Then, the steering wheel became so hard to turn that it almost felt like we had picked up a crab pot.

All of a sudden, the starboard (right) engine quit.

Even though both starboard tanks indicated that each had fuel, Sam went below and switched tanks and then tried to restart.

We could see the Wildwood Amusement Park on land and decided to turn back to Cape May since we were having trouble steering and were down to one engine.

Due to our steering issues and coming close to a sailboat, we knew we needed help.

Sam called “Pan Pan Pan” on Channel 16 (VHF radio) and the Coast Guard responded. He let them know about our situation.

One thing I have learned about Sam is that he LOVES talking on the radio!

It must be an airline pilot thing.

I have rolled my eyes when he has used it because it really didn’t seem necessary to me but this time I was glad that he was prepared and comfortable.

What a tremendous help he was and offered great advice.

Towboat US to the Rescue

The Coast Guard was incredibly helpful and when we decided to call a tow, we gave them an update.

Now, I can’t tell you how many people advised us to get Towboat US or some sort of service that will tow when needed.

Sam used the BoatUS app and called for a tow.

Vinny showed up a half hour later.

He talked me through putting the bridle on the front of our boat around the anchor.

The instructions were easy enough but the rolling waves and chilly wind made the task a little tricky.

Vinny towed us to Canyon Club Resort Marina with only one dicey incident where he truly did cuss like a sailor.

The marina welcomed us with open arms but mechanics don’t work on Sunday so we settled into our new slip.

We watched Netflix and drank champagne.

Our Route That Day

We were at the marina service counter soon after they opened.

They were so kind and sent a mechanic out to our boat sooner than we expected.

Are you kidding me?

As a result, there was air in the lines which is never a good thing.

We also have to replace filters with a less restrictive kind (allowing more particles in) so the engines won’t get clogged. They can take it.

The steering problem has corrected itself.

We know the problems but we don’t have the parts.

Cape May is Beautiful

So, it seems like we will be staying in Cape May, NJ a little while longer.

If you pass this way, do stop in and say hello!